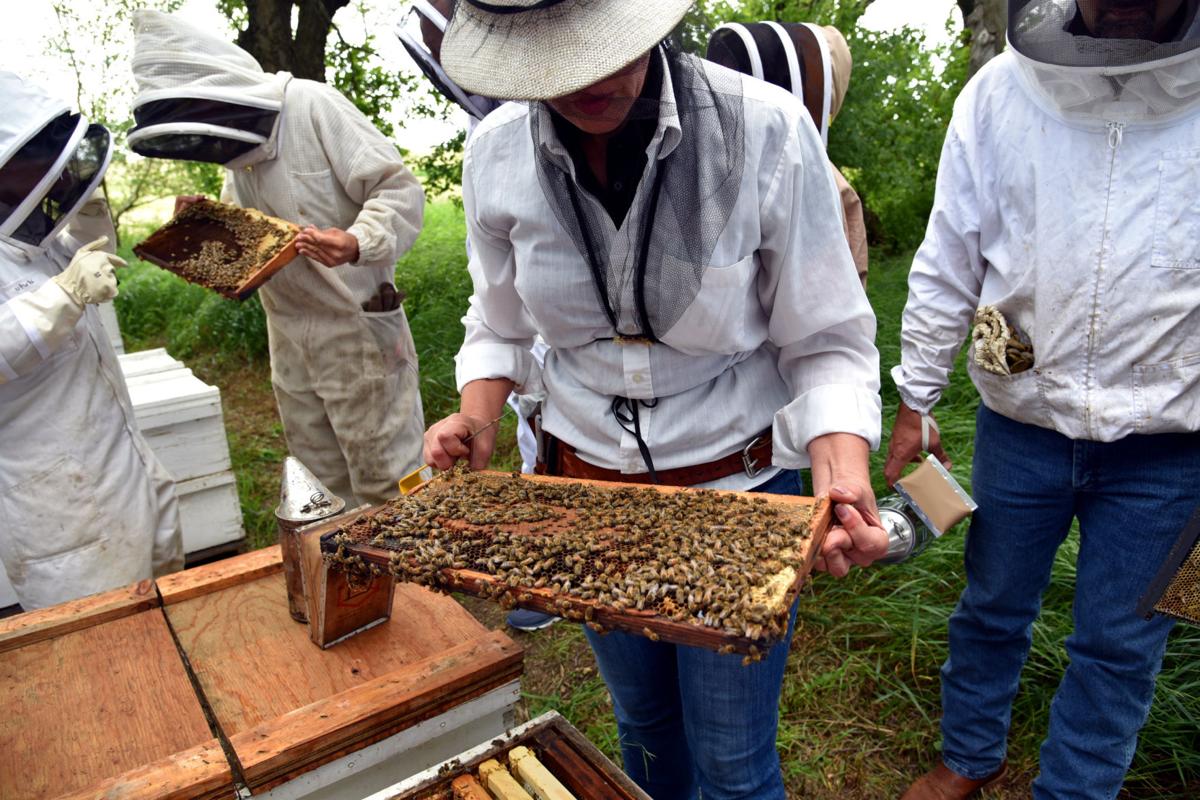 Executive Director of Project Apis Danielle Downey examines a hive in search of the queen bee at Browning Honey Farms in Jamestown, N.D. Inset: Queens are shipped to apiaries to begin fresh colonies, and the demand for them has been increasing for suppliers. 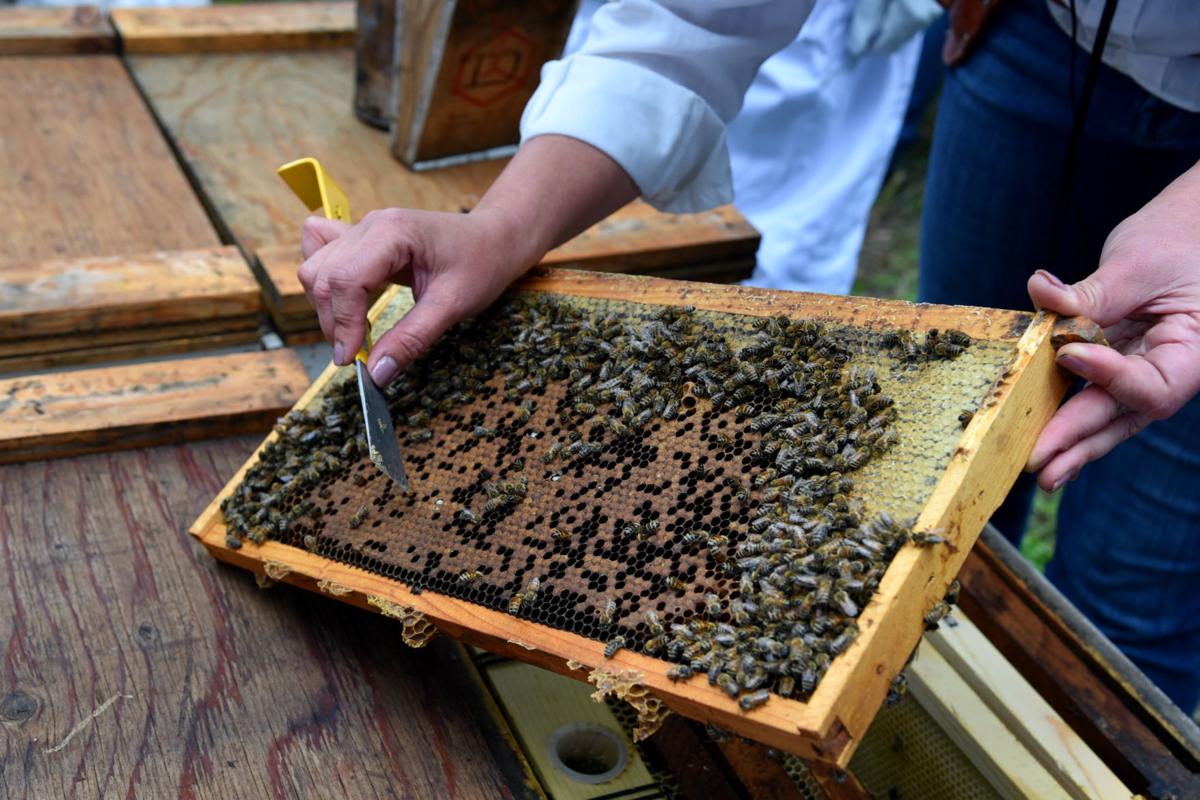 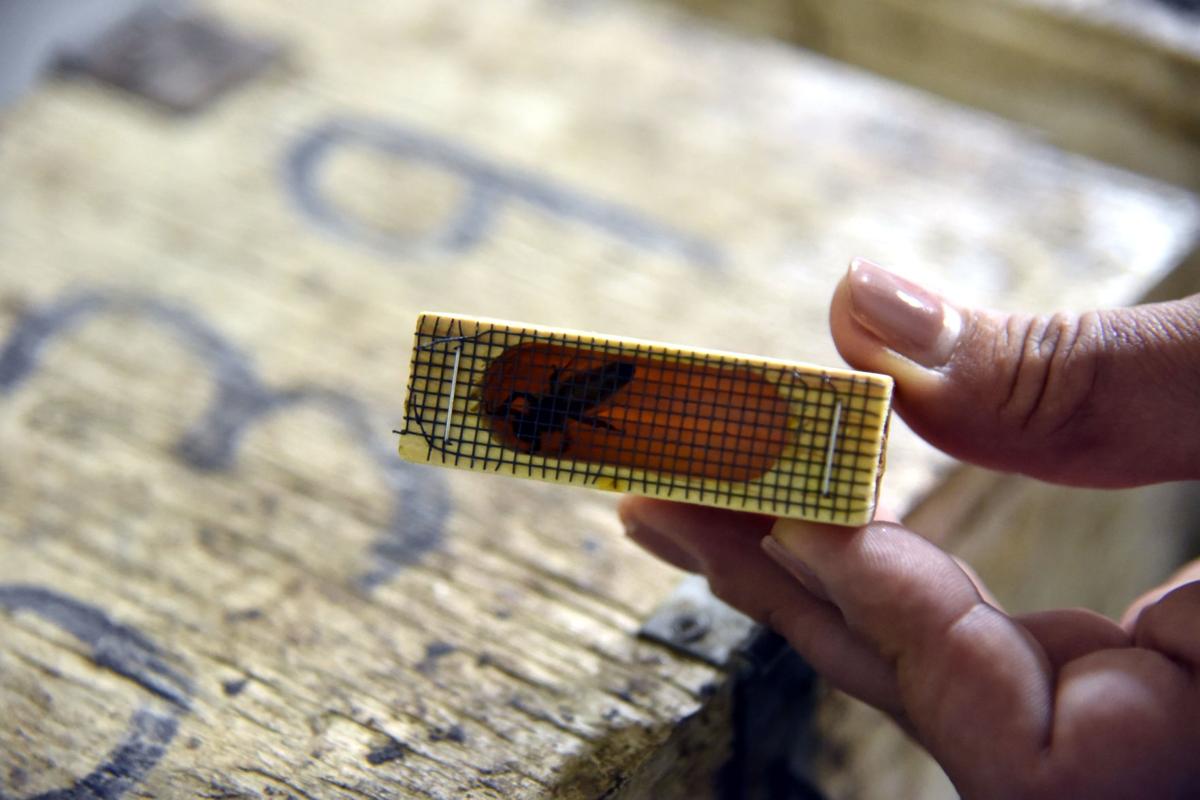 Queens are shipped to apiaries to begin fresh colonies, and the demand for them has been increasing for suppliers.

Executive Director of Project Apis Danielle Downey examines a hive in search of the queen bee at Browning Honey Farms in Jamestown, N.D. Inset: Queens are shipped to apiaries to begin fresh colonies, and the demand for them has been increasing for suppliers.

Queens are shipped to apiaries to begin fresh colonies, and the demand for them has been increasing for suppliers.

The annual replacement of queen bees to maintain hive fertility has strained the apiary community and their suppliers. It’s raising questions as to whether North Dakota can remain the national leader for honey production in coming years.

Owner of D & L Apiaries Dave Huelsman owns 130 beehive locations in northwest North Dakota, a business he has grown since 1992. He now faces the near impossible task of placing an order to suppliers for 4,000 queen bees, a year in advance, if he is to be assured mated queens come spring.

Having to make an educated guess as to which bee colonies might fail is a pricey gamble for apiarists who once paid $8 per queen. Demand has now driven the cost to $24 each, according to Huelsman.

However, the price of not being put on a waitlist for queen bees is of equal risk.

“It’s getting harder to keep queens. They lose their fertility and eventually only produce male offspring,” he said. “At that point, we consider it a ‘dead hive.”

A drone’s sole purpose is to mate with a queen, while the female population carries out the functioning tasks of the hive. Without queens to produce worker bees, apiaries are forced to requeen hives at a quickened rate.

“Some people say it’s neonicotinoids, some say it’s the fungicide. Maybe we’re pushing our queens too hard by giving them pollen substitute,” Huelsman said in reference to the diminishing prairie habitat, which has given way to monoculture plots. Fields of crops such as wheat and beets further don’t need pollination and offer bees no nutrition.

Jay Miller of JL Apiaries saw his first bee yard when he was 7 years old — a vivid memory that would foreshadow the rest of his adult life. Miller now oversees 6,000 hives, many throughout the Williston area.

The uncertainty with suppliers has transitioned from purchasing mated queens to cell-form — which would be mated by their drones once the queens emerge from their cell.

“We’ve had to go to that route because we can’t get mated queens,” he said. “It’s not only a waitlist problem but a ‘we can’t fill your order problem.’ The territory to raise more queens is really not that available.”

Cause for queen scarcity

Neonicotinoids act as spermicide for drone bees, reducing sperm count by 40 percent, according to a recent study conducted Institute of Bee Health at the University of Bern, Switzerland. Beekeepers suspect it is also influencing the queens, who receive a dose of chemicals every time they rub against cell walls to lay an egg.

“There was a study on hives with brand new frames, and in the fall (scientists) did an analysis on the cells and found 100 different insecticides,” Miller said.

Many crops require the use of herbicides from time to time, within stringent time frames related to planting and harvest times, which is understood by beekeepers.

“Farmfields are really clean. Farmers are penalized with too many weeds,” Miller said. “It’s not just bees, but the overall smorgasbord of insects that have been severely compressed.”

Many crops in the area don’t require bees, as they are wind pollinated. The lack of diversity and loss of natural North Dakota habitat, once rich in prairie flowers, has caused apiarists to supplement bee diets with sucrose, high fructose corn syrup and brewer’s yeast.

“Bees require a lot of different plants to forage on throughout the growing season,” said Clint Otto, research ecologist for the USGS Northern Prairie Research Center. “We’re capturing that relationship.”

Though pesticides and changes to the landscape have affected honeybees, beekeepers have been fending off arguably the biggest threat to hive health in the last decade — varroa mites.

“Gosh awful, cheating little bugs,” Miller said. “They’ve already become resistant to materials that kill them. Their ability to mutate is way easier than for us.”

Beekeepers treat hives with formic acid, oxalic acid and other miticides. Though treatments can be administered, host drones can carry the mites between hives and reinfest colonies the next day, according to Danielle Downey, director of operations for Project Apis m.

Wearing only a hat and veil to protect from bee stings at Browning’s Honey in Jamestown, N.D., Downey uncapped cells to show how varroa mites infect larval bee cells, which can quickly saturate a colony if a beekeeper isn’t diligent.

“(Population decline) has been on par with the national average with mid-thirty percentile over winter,” said Zac Browning, owner of Browning’s Honey. “As the landscape has begun to change, beekeepers have begun to notice additional mortality.”

“Thirty percent in real terms — in what industry could you afford to lose 30 percent? If sheep, cattle or swine lost that it would be a crisis. You hope for 30 percent, some hives are 60 to 80 percent,” Miller said, telling of beekeeper horror stories of apiarists who never recovered.

Beekeeping reaps $15 billion a year in ecosystem services, which has offered apiarists additional income. While apiarists make profit off of honey and the byproducts sold to various industries, they also ship their hives to California in the winter to pollinate almond orchards.

California beekeepers are short the hives necessary for the almond demand, so almond farmers have been sourcing bees throughout the U.S., many from North Dakota.

This would naturally be a hibernation period for bees and has incited worry for beekeepers if pushing the queens and their colony is also diminishing their fertility.

“Mites are a big stress for queens but, between us pushing them, or for some reason, we have more dead hives,” Huelsman said.

Many have heard about the plight of the honey bee, and the public has been overwhelmingly sympathetic.

While many factors plague bee populations and their queens, licensed apiaries have increased 35 percent in North Dakota since 2010, according to the North Dakota Department of Agriculture.

Lobbying groups for bees remain small, but funding from groups such as Project Apis m., which has contributed $6 million toward bee research since 2006, is helping uncover methods to protect bee populations.

“Were moving in the right direction. Public awareness, that’s key,” Miller said. “I think if everyone can help, if every family dedicated one square yard for pollinator-friendly plants and every farmer used two acres, it would change the face of the state — it would change the world.”