Little Sisters for the 2021 Miss North Dakota pageant gathered at WalMart to place $739 into the collection jar for Children's Miracle Network. The funds were raised during a whirlwind week where the girls learned a production number, and participated in a variety of other activities for the pageant. 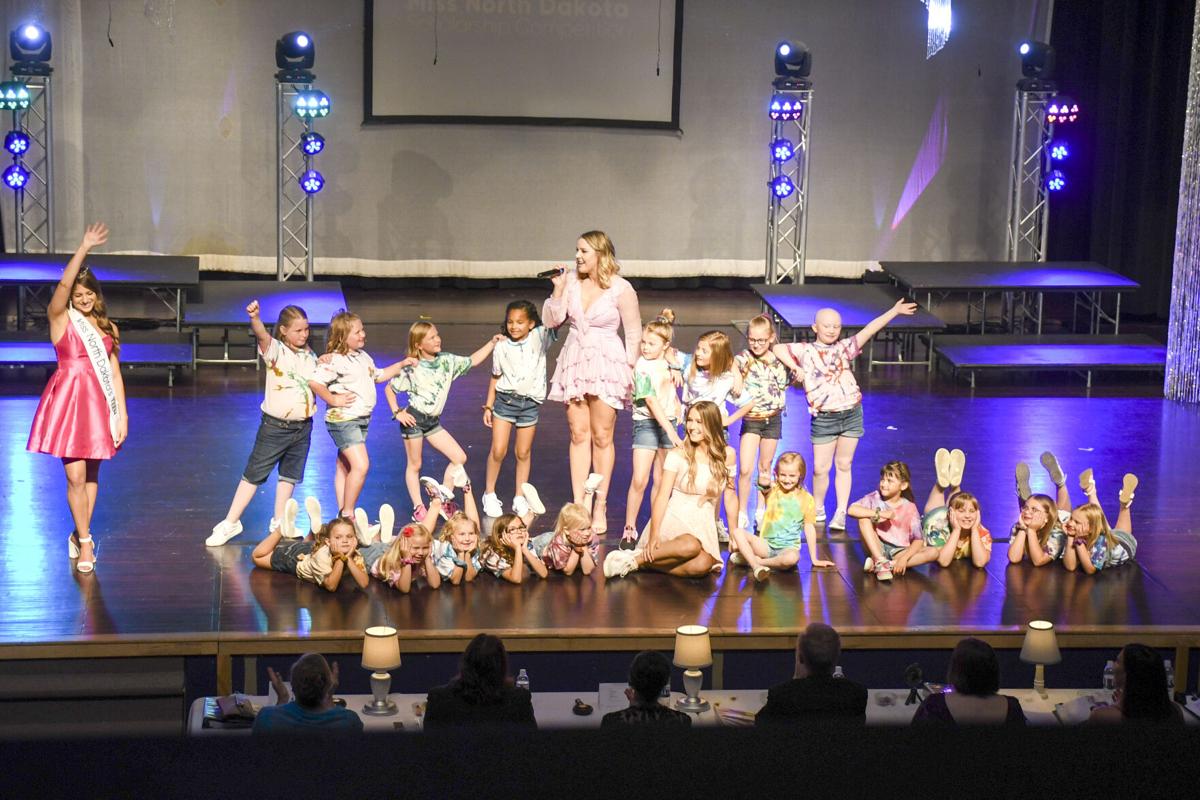 The Little Sisters perform on Saturday, the last night of the Miss North Dakota competition.

Little Sisters for the 2021 Miss North Dakota pageant gathered at WalMart to place $739 into the collection jar for Children's Miracle Network. The funds were raised during a whirlwind week where the girls learned a production number, and participated in a variety of other activities for the pageant.

The Little Sisters perform on Saturday, the last night of the Miss North Dakota competition.

From the smiles, a casual observer could be forgiven for thinking that the 18 girls gathered at Walmart a weekend or so ago for a photo opportunity were probably there to receive some sort of gift, like a free bicycle or other fun toy.

Smiles of glee were on most every face for the occasion as they gathered in white T-shirts for photos by the nearby gang of admiring moms and “pop-arrazi.” But the girls were not there to receive a gift at all, but to give one. They were the Little Sisters for the 2021 Miss North Dakota pageant, and they were at WalMart to put $739 into the collection jar for Children’s Miracle Network.

At the beginning of their whirlwind week as Little Sisters, each girl was given a coin purse by American State Bank to fill up with donations for the Children’s Miracle Hospital in Fargo. The task was in addition to all their other activities, which included learning a production number to perform on stage, tie-dyeing “Girls Just Want to Have Fun” T-shirts with their Big Sisters, greeting their Big Sister with a rose during the Evening Wear event, and a “Pink Party” hosted by Strike Zone. To name just a few.

The project is just one of several activities that aim to teach these young ladies leadership in both their personal lives and in the communities where they live.

“It’s amazing to us every year how the girls spend a week being mentored by their ‘Big Sisters’ in grace, poise, self confidence, learning production numbers, and performing on the ‘BIG’ stage,” Little Sisters co-coordinator Vivian Kalmik told the Williston Herald. “And they still bring hugs and giggles to the Miss ND candidates and raise money for Children’s MIracle network.”

Kalmik knows firsthand how the program helps young girls grow, since her daughters Allayna Stevens and Sam Kalmik were both Little Sisters at one time, and their daughters as well have also been Little Sisters. Alllayna and Sam also now both help Kalmik to direct the Little Sisters program.

Each girl is paired randomly with a Big Sister by selecting from envelopes that have one of the names from that year’s Miss North Dakota pageant candidates. Despite that randomness, the relationship that develops many times becomes a lifelong friendship, Kalmik says.

You can get an idea of just how neat these friendships are by reading some of the essays these girls wrote about their Big Sisters during the week. The girls try to win a scholarship for their Big Sister with the essays, and three were chosen by a committee of former Little Sisters to receive scholarships this year.

— Gemma Yadon Won a Scholarship for her Big Sister Sydney Helgeson, Miss Williston with her heart touching statement “ With smiles and hugs she was always so excited to see me...She made me feel So Special Every Time!”.

— Abby Buth won her Big Sister Julia Ressler, Miss Capital A’Fair a Scholarship with her heart touching statement “I have all brothers and it was fun for me to finally get to say “My Big Sister”

— Aislynn Stevens won a scholarship for her Big Sister Monni Nyaribo, Miss Red River Valley Fair with her heart touching statement “She loves Dill Pickle chips.... just like Me!, she gives the best hugs and she is the Perfect Big Sister for me...I Love Her!

“Although each letter is deserving of a scholarship, the committee looks for that little statement that tugs at their hearts,” Kalmik said.

Choosing just three statements was hard work. The smiles on these girl’s faces show they are all bright, intelligent young girls. They’ll be a force to be reckoned with some day, whatever path they choose.