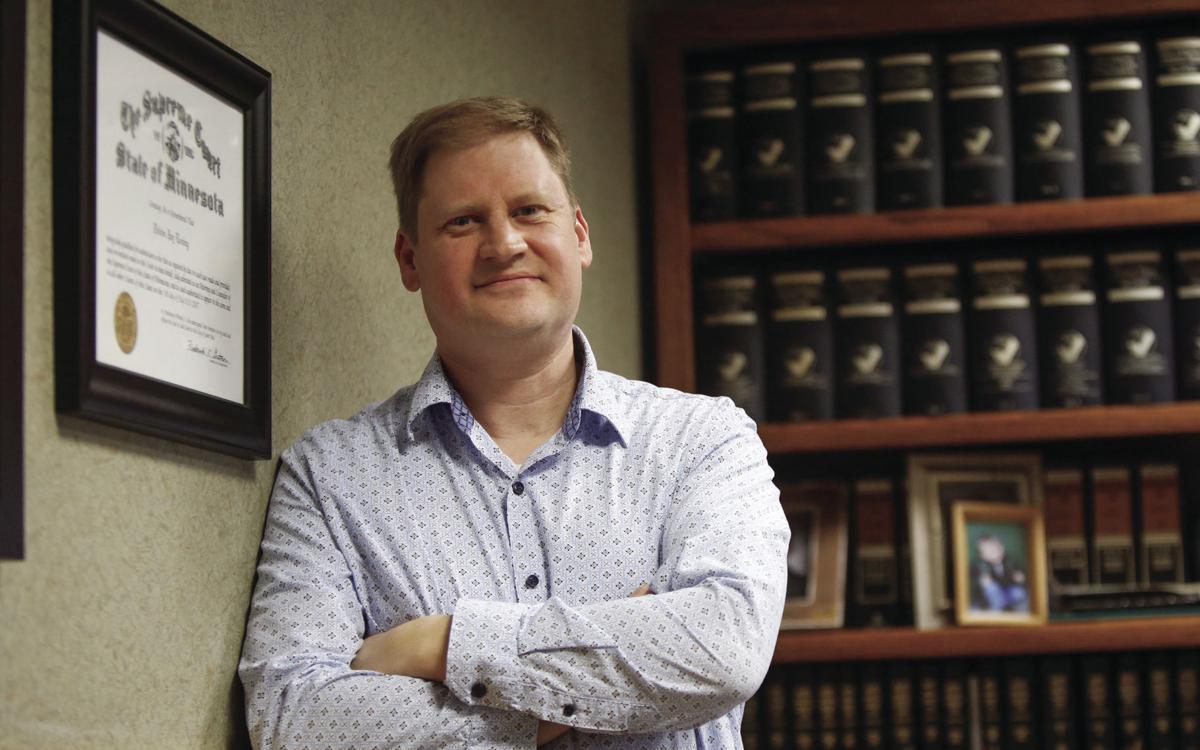 Delvin Losing is the only attorney practicing in Casselton, N.D. Three counties in the state have no practicing attorney. 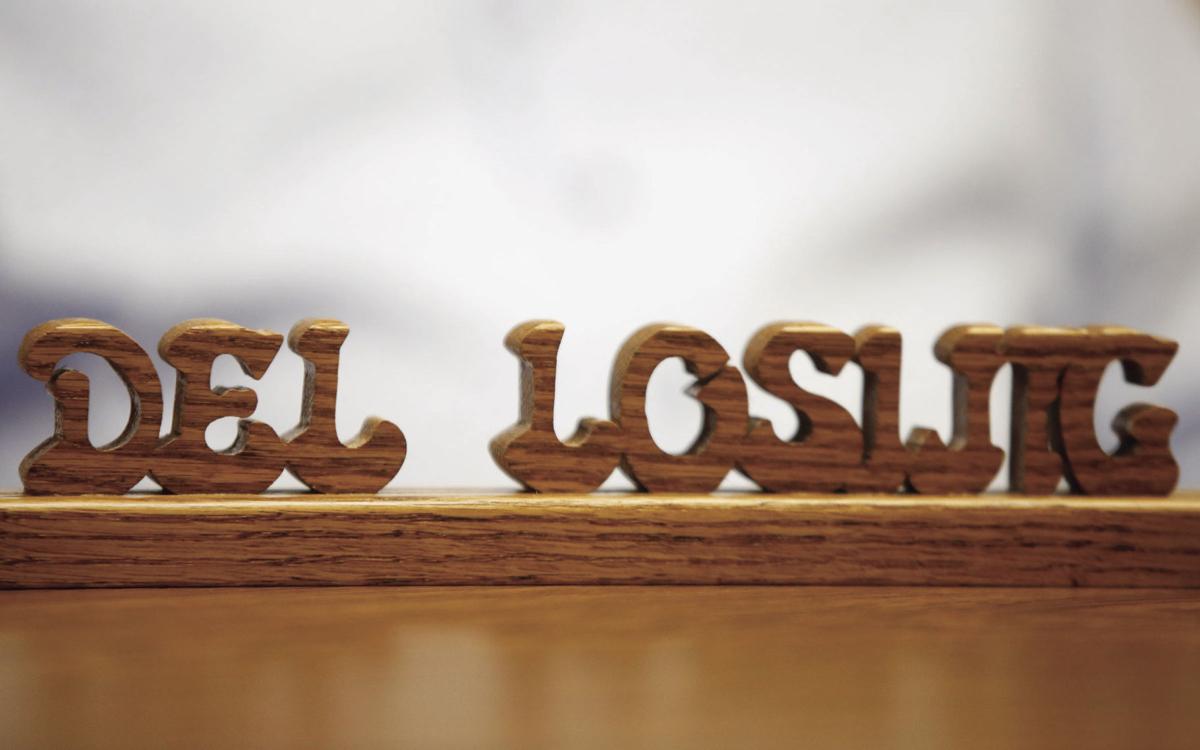 A client of attorney Delvin Losing made this name stand out of appreciation for his work. 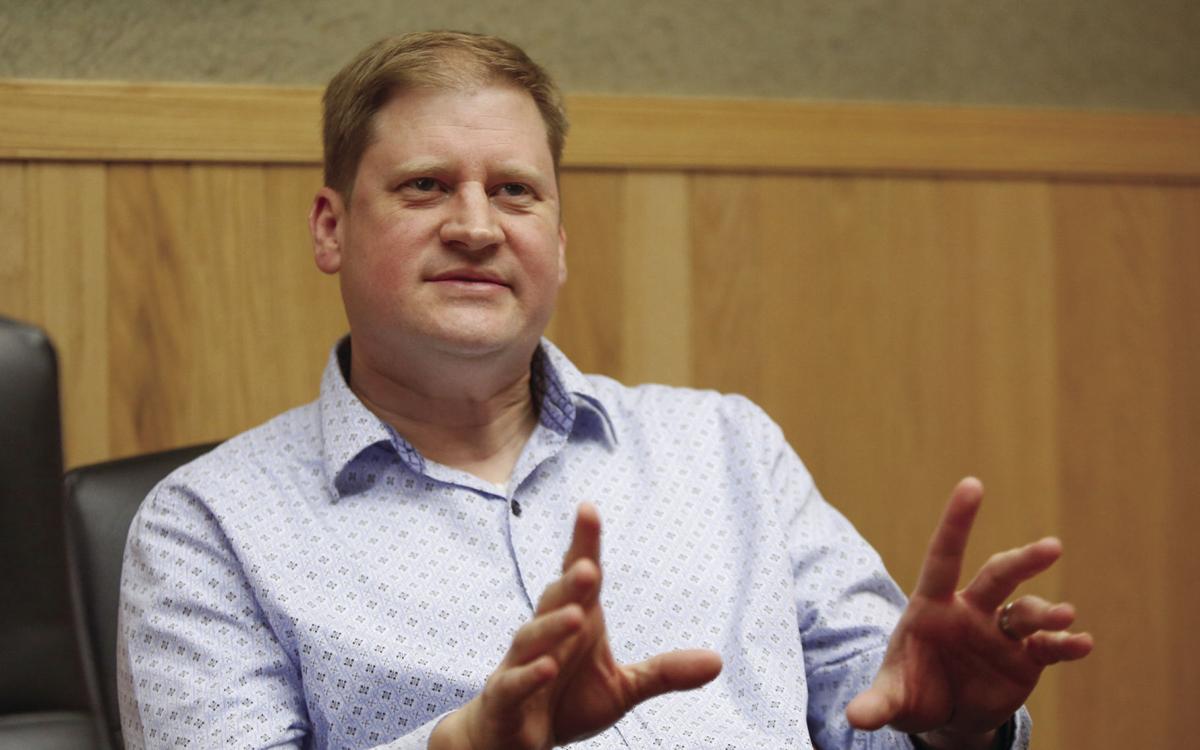 Losing says the work of an attorney is not always glamorous but it is important because rural communities need legal services available to them.

Delvin Losing is the only attorney practicing in Casselton, N.D. Three counties in the state have no practicing attorney.

A client of attorney Delvin Losing made this name stand out of appreciation for his work.

Losing says the work of an attorney is not always glamorous but it is important because rural communities need legal services available to them.

CASSELTON, N.D. — When Delvin Losing — the only attorney in Casselton — was asked why he’s kept his office in the town of nearly 2,500 residents, he jokingly replied, “Sometimes, I wonder.”

But then he went to get something. After walking to his office, he returned with a wooden carving of his name for his desk, given to him by a client who made it by hand.

“Who brings this to their lawyer?” he asked with a smile, noting how good people are in the community.

Losing has been an attorney in Casselton for 17 years, and essentially the only attorney in town for the last decade.

Coming across a lawyer in a small North Dakota town can be hard, especially in rural areas. Three-fourths of the state’s counties have fewer than 10 attorneys each, and three — Golden Valley, Slope and Steele — have none, according to the State Board of Law Examiners. More than 85% of North Dakota’s 1,670 attorneys have work addresses in the state’s seven most populated counties, including Cass, Burleigh and Grand Forks.

Attorneys and experts The Forum spoke with were not surprised metropolitan areas attract more attorneys, and they agree there is a shortage in rural areas.

“I think there is still a need for attorneys, but people just don’t want to live there as much,” Losing said of rural areas.

Tied with Arizona and Idaho, North Dakota had the second lowest per capita count with 22 attorneys per 10,000 residents last year, behind only South Carolina, according to a Forum analysis of U.S. Census Bureau and American Bar Association data. The nation had a rate of 39, not counting Washington, D.C.

As attorneys retire or move to more populated regions, or to firms with higher paying salaries, it often can leave residents in rural areas without representation, unless they drive long distances.

“Those rural citizens, they have the same legal issues that any other urban citizen would have,” said Trish Hodny, field placements director at the UND School of Law. “They just don’t have access to the same resources when it comes to lawyers.”

Not including D.C., more than 1.2 million attorneys were licensed and active in the U.S. last year, the ABA said. North Dakota had the lowest amount of attorneys with addresses in the state, while New York topped the list with 179,600, followed by California with 170,044 and Texas with 90,485.

“When you look at our numbers of lawyers, it’s always around 60% . . . are in North Dakota,” said Tony Weiler, executive director for the North Dakota Bar Association. “We have a lot of members that have addresses outside of North Dakota.”

The number of licenses issued has stayed relatively stable in recent years, Weiler said. He noted attorney shortages exist not only in rural North Dakota but across the nation.

But fewer new attorneys are being accepted to the state bar, according to the 2018 North Dakota Court System report. Last year, the state admitted 123 new attorneys, 7% down from 2017 and a 45% decrease from 2015, the report said.

“I don’t pretend to have the answers there,” he said of why there is a shortage. “I think a lot of it is younger millennials or younger lawyers really want vibrant cities with downtowns and other people their age.”

Rural areas in North Dakota tend to have aging populations, he said.

Finding people to move to rural cities has always been difficult, said Richard LeMay, executive director for Legal Services of North Dakota. Small-town attorneys make less than those in metropolitan areas, he said.

North Dakota attorneys made an average of $107,290 last year, ranking 38th among the rest of the nation, according to a November report from Forbes. That was below the national average of $144,230, the report said in citing May 2018 numbers from the U.S. Bureau of Labor Statistics. California and New York had the highest salaries for attorneys, paying $171,550 and $167,100, respectively.

Attorneys want to make enough money to pay off loans and make a living, LeMay said.

Jeffrey Glynn is the only attorney in Ellendale, N.D., and one of four attorneys in Dickey County. One is set to retire soon, he said.

In his 13th year of his career, Glynn was an attorney in Bismarck for 10 years before moving back to his hometown to practice.

His practice includes a variety of areas, mostly real estate. He was able to focus exclusively on oil and gas law in Bismarck, but rural clients have questions and ask for services regarding a wide range of law, he said.

He sometimes has to turn work away so he doesn’t get so busy that it takes too long to complete tasks for current clients, he said.

“I feel like sometimes you’re letting people down when you either don’t help them or take a long time to get stuff done,” Glynn said.

Legal Services, which provides civil advice to low-income clients, tries to provide quality services to as many people as possible, LeMay said. But more people are applying for their services because they find it difficult to find attorneys in their area who can take their cases, he said.

“So they’re coming to us because they’ve got nowhere else to go,” he said. “We get nearly 8,000 people calling us every year and applying for services. … It’s pretty hard to do with eight attorneys.”

Glynn said he feels bad for residents in smaller communities who can’t get as much help as they need, especially if they have to drive a long distance multiple times to meet their lawyers.

“A lot of people have a pretty serious problem … or things going on in their lives,” he said. “And then they have no money, and they are forced to drive a long ways away basically to get any legal counsel, which doesn’t make your life any easier.”

The University of North Dakota, which has the state’s only law school, has graduated a steady number of law students. The classes of 2014 through 2018 have produced between 64 and 84 attorneys, with 2019 hitting 107, according to the school.

Those attorneys may not stay in North Dakota, and even if they did, they would only meet a small portion of the demand, Hodny said.

In an attempt to get more attorneys to rural areas, UND and other lawyers started a program in 2014 that places law students in small towns with veteran lawyers. The program has awarded 61 scholarships in the last five years.

Students get a sense of the community, build relationships and, “hopefully make a decision to come back and stay,” UND School of Law Dean Michael McGinniss said.

“We’re seeing the fruits of that coming forward over the past several years,” he said.

Casselton, which is a bedroom community to Fargo, is in a different situation than a town in the less populated portions of North Dakota, Losing said.

Still, people who don’t have representation — whether for a criminal case like a drunk driving charge or helping a resident write a will — is a critical issue, he added. Even though attorney work is not always glamorous, it is important.