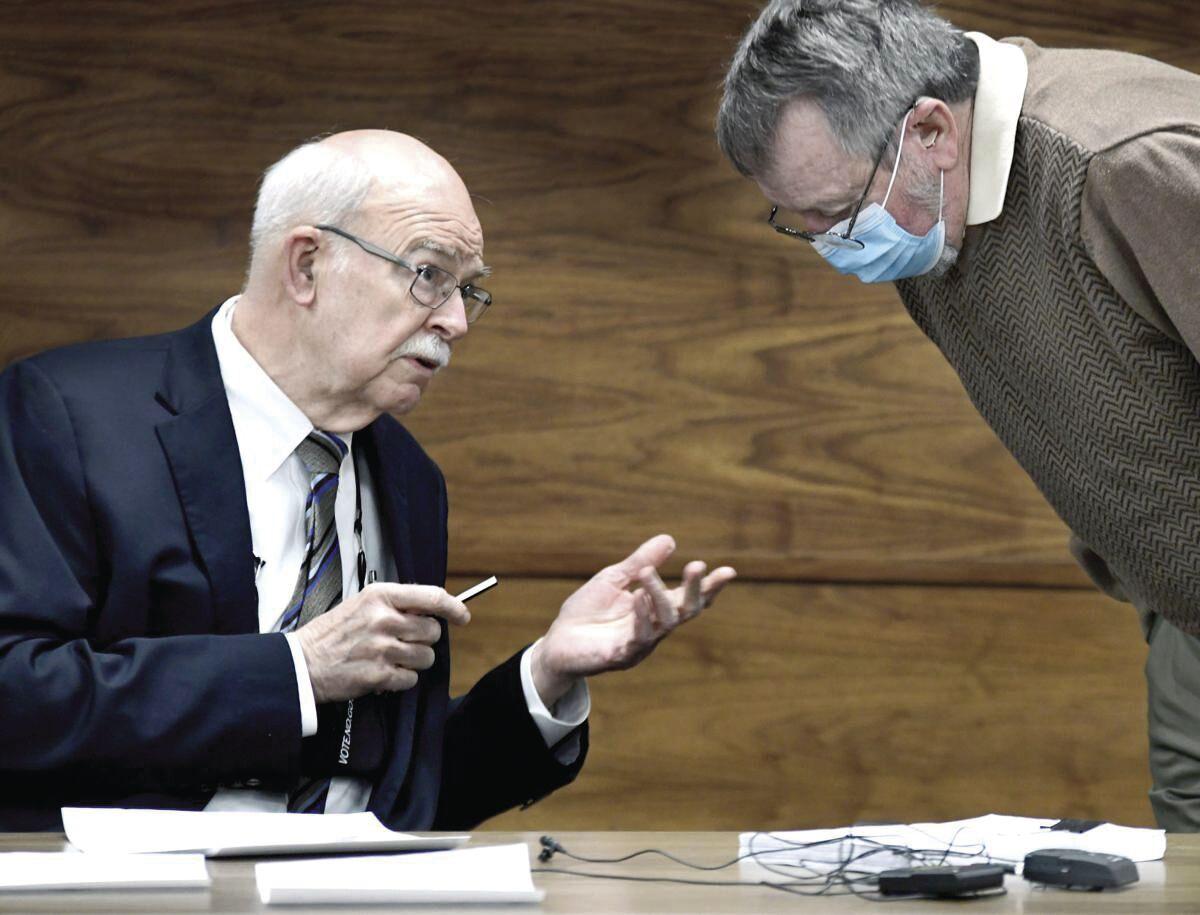 North Dakota Secretary of State Al Jaeger, left, talks to District 8 GOP Chairman Loren DeWitz before the state Canvassing Board met to certify the results of the 2020 general election on Friday at the state Capitol Bismarck. 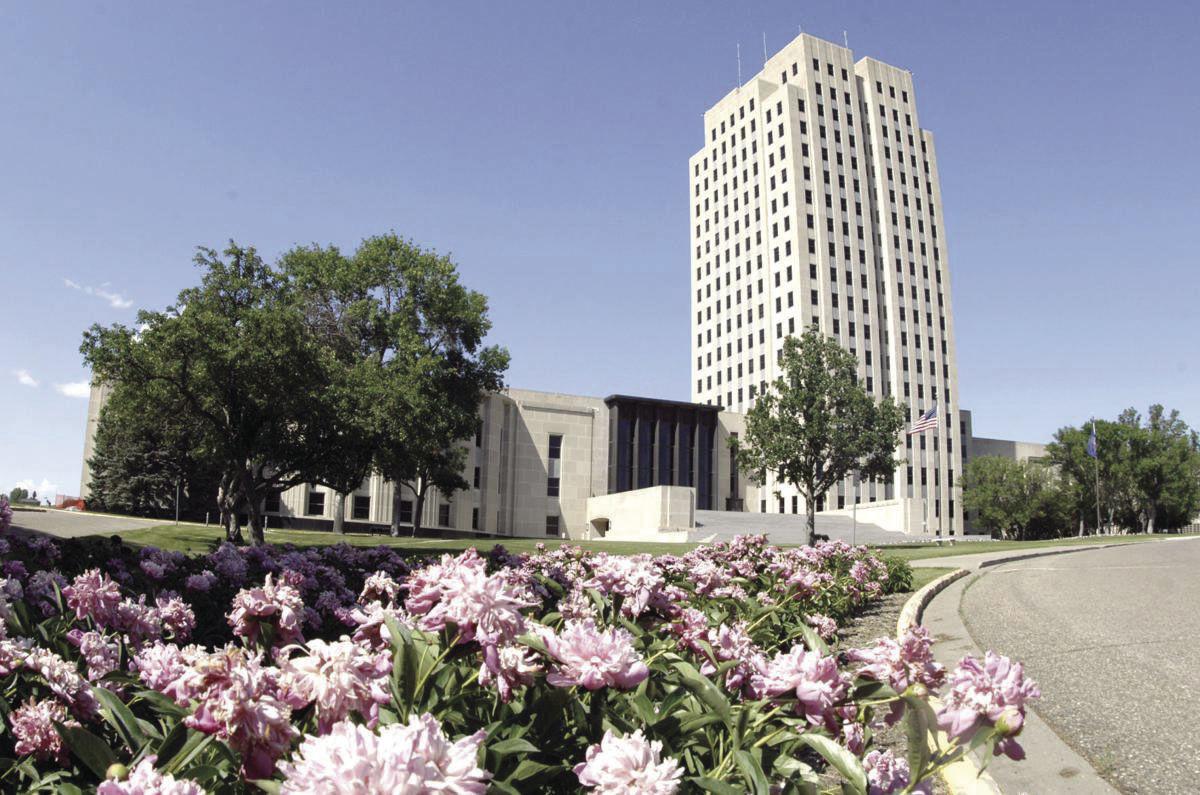 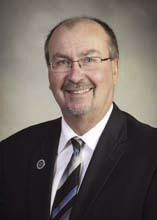 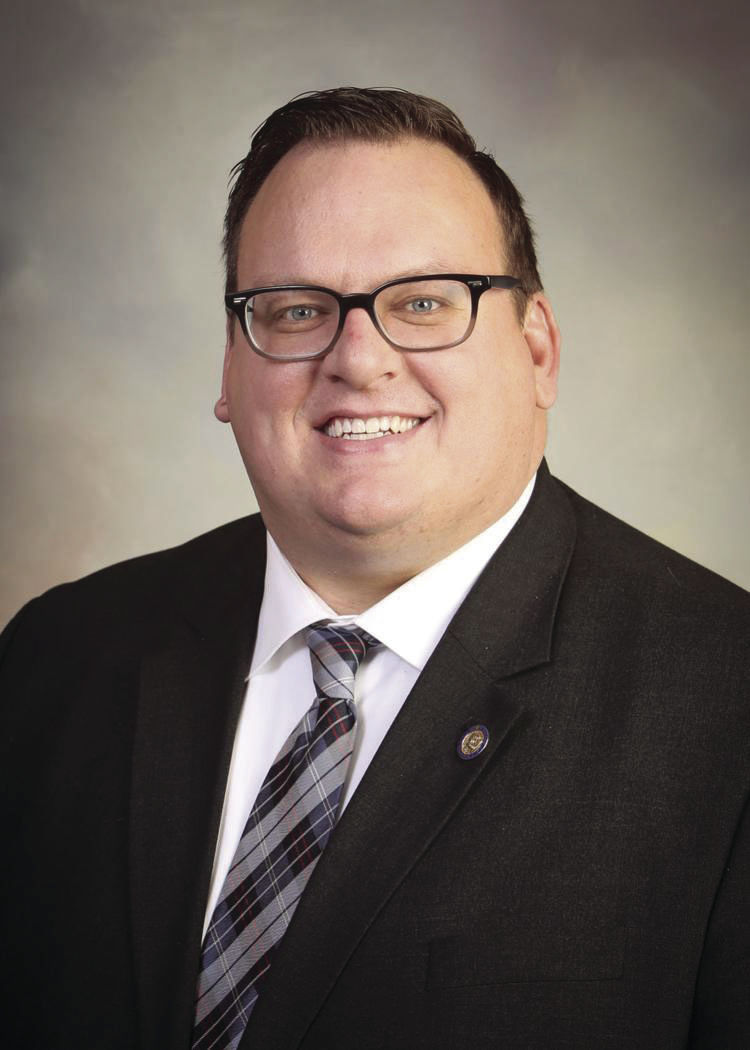 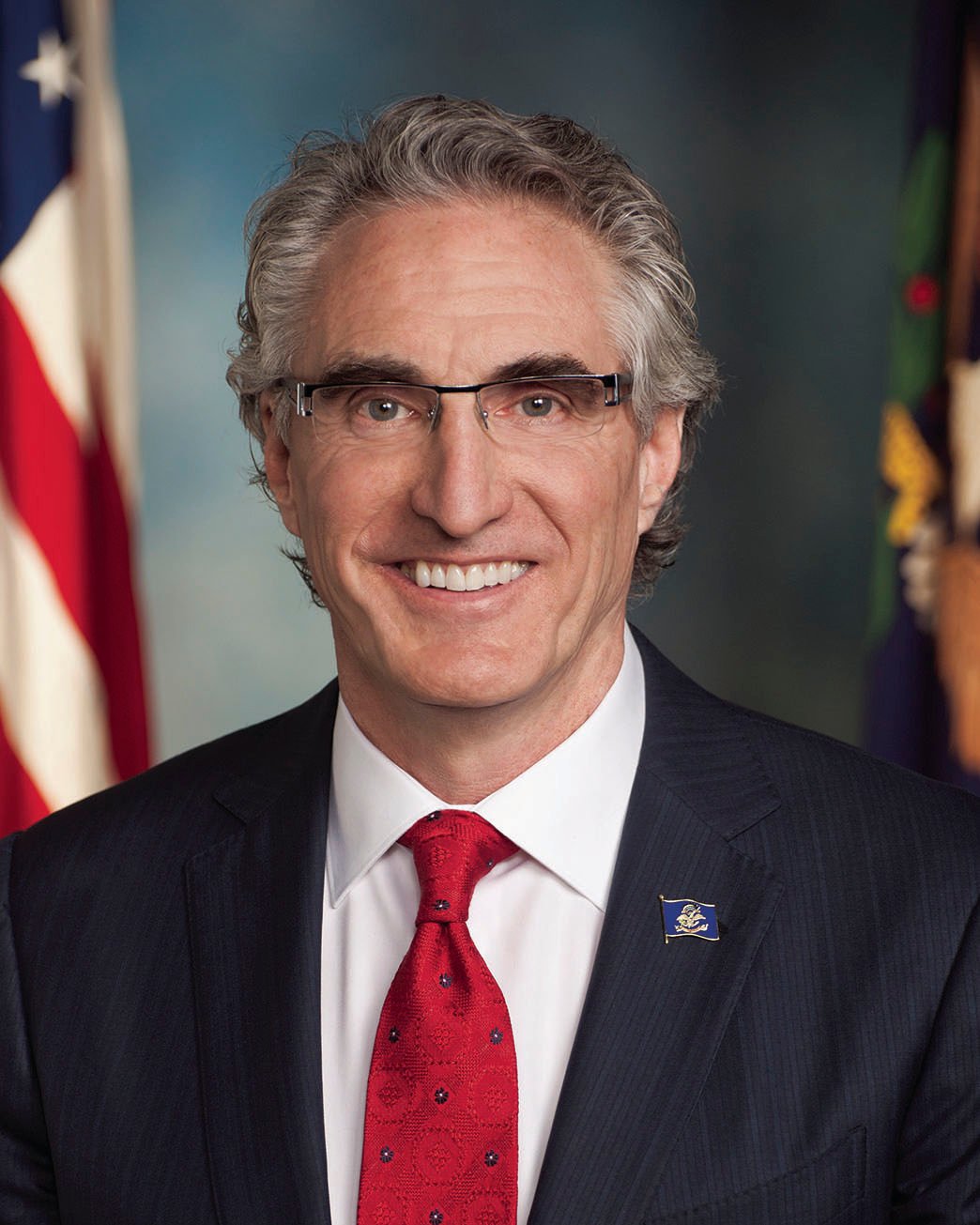 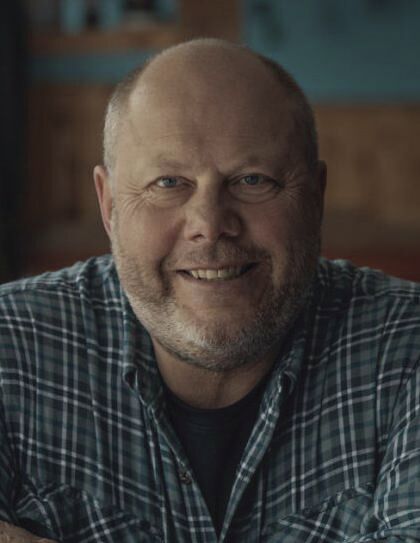 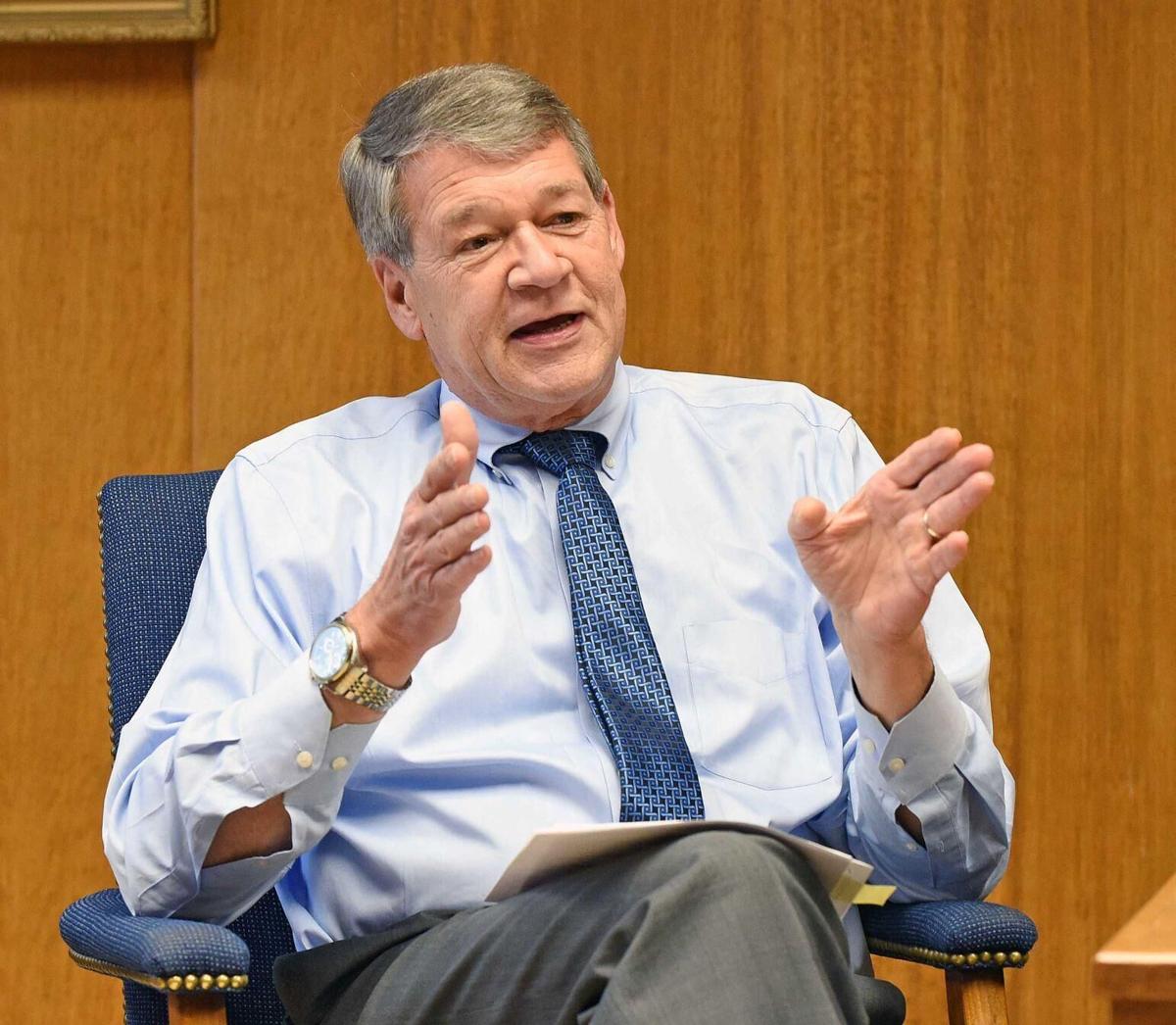 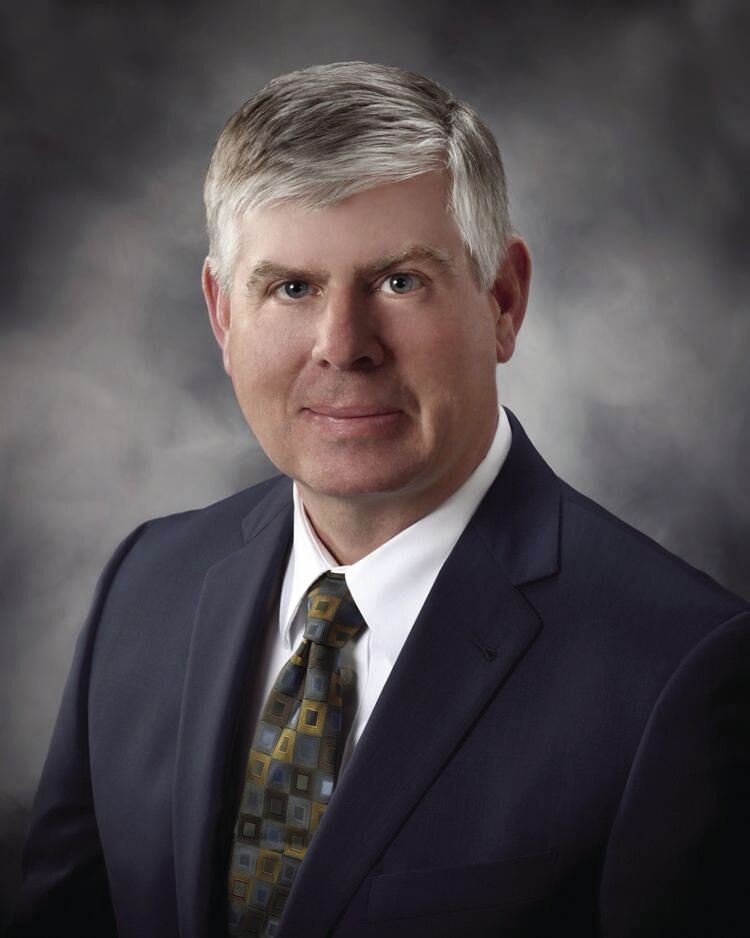 North Dakota Secretary of State Al Jaeger, left, talks to District 8 GOP Chairman Loren DeWitz before the state Canvassing Board met to certify the results of the 2020 general election on Friday at the state Capitol Bismarck.

North Dakota lawmakers on a powerful committee voted unanimously Friday to ask the attorney general to represent the Legislature in Gov. Doug Burgum’s legal battle over a House seat won by a deceased candidate.

Attorney General Wayne Stenehjem told the Tribune that he will accept the duty, saying he believes the governor is “overstepping.”

Legislative Management, which guides lawmakers’ work between sessions, met Thursday and Friday at the state Capitol to wrap up lawmakers’ interim work before the upcoming legislative session. House Majority Leader Chet Pollert, R-Carrington, brought forth the motion, which the 17-member board quickly approved.

Burgum sued on Thursday, asking the state Supreme Court to allow his appointment to the Bismarck-area District 8 House seat won by David Andahl, 55, of Baldwin, who died Oct. 5 from COVID-19. Andahl won with 36% of the vote. Oral arguments before the high court are set for Nov. 20.

Burgum cites a constitutional provision that “The governor may fill a vacancy in any office by appointment if no other method is provided by this constitution or by law.”

His lawsuit asks the Supreme Court to declare Andahl’s election null and void; to preclude third-place vote-getter Democrat Kathrin Volochenko; to stop the the secretary of state, the Legislature and the District 8 Republican chairman from filling the seat; and to allow the governor by his “constitutional right” to appoint a new state representative.

The Supreme Court on Friday denied the governor a preliminary injunction that would stop the others from immediately filling the seat.

Attorney General Wayne Stenehjem issued an opinion last month that Andahl’s death, if he were elected, would create a vacancy that could be filled by District 8 Republicans’ Executive Committee.

Pollert’s motion on Friday was introduced and swiftly passed after lawmakers returned from a break in the morning’s meeting. Discussion was brief and supportive.

“I do not understand what scenario would play itself out in which the executive branch would be able to pick someone who should be seated at the Legislative Assembly,” said Rep. Mike Lefor, R-Dickinson. “There’s clearly a separation of powers, and I ... fully believe that it is not the right of the governor to choose who sits in this chamber. It is the right of the people of District 8.”

Pollert and Stenehjem spoke Thursday night. The House chief said Friday’s motion was to “send the message.” The attorney general told the Tribune on Friday that he will represent the Legislature and secretary of state, whose interests he said “are aligned.”

He said Burgum has “got a terrible case all around” and is wasting tax dollars in his legal fight.

“Everybody in the Legislature — Republican, Democrat, House, Senate, conservative, liberal — are all in agreement that the governor is overstepping,” said Stenehjem, who himself was a state lawmaker for 24 years.

Governor’s spokesman Mike Nowatzki said “North Dakota law is clear that a deceased person is not a qualified elector. And the Attorney General’s opinion is instructing the Secretary of State to issue a certificate of election to a deceased person.

“This is not about personalities. This is about defending the Constitution and the rule of law,” Nowatzki said in an email. “The Governor is fulfilling his Constitutional responsibility to fill the District 8 seat because there is no state law that applies to this unique situation.”

North Dakota’s Democratic-NPL Party also might enter the fray. Party leaders believe Volochenko, who won 11% of the vote, should be seated, and they have been consulting with attorneys as to the best path forward.

House Minority Leader Josh Boschee, D-Fargo, a member of the committee, said that while House Democrats “certainly disagree with the majority party in terms of the outcome and who (the representative) should be, we do stand in solidarity with the fact that the people of District 8 make a decision.”

Andahl and Dave Nehring, of Bismarck, who won 41% of the vote, teamed up and won District 8 Republicans’ endorsements and voters’ nominations for the two House seats. They defeated longtime Rep. Jeff Delzer, R-Underwood, in the June primary.

Delzer chairs the House Appropriations Committee and has tangled with the first-term governor over budget issues. Burgum, a wealthy former software executive, gave more than $1.8 million to a political group run by former advisers that successfully targeted Delzer’s seat.

Political observers have pointed out the intraparty Republican politics at play in the fight, including Burgum’s conflicts with Delzer and his one-time rivalry with Stenehjem in the 2016 gubernatorial primary, when Burgum handily defeated the attorney general for the party nomination from voters. Burgum won a second term this month with Lt. Gov. Brent Sanford.

Stenehjem said “let’s not kid ourselves” about Burgum allegedly attempting to preclude Delzer from serving in the Legislature.

The District 8 Republican chairman said some people have inquired about the district party’s appointment process. Delzer “has expressed interest,” DeWitz told the Tribune.

Delzer did not immediately return a phone message regarding DeWitz’s comments.

Democratic-NPL Party Executive Director Michael Taylor broached a motion to “essentially section off the voting in the District 8 House race and vote on that separate from all other races.”

“My only fear is the implication of this vote, is that it would signal that the two winners are the ones laid out here, by certifying these results,” Taylor told the secretary of state. Taylor was filling in for Democratic-NPL Party Chairwoman Kylie Oversen, a member of the board.

Jaeger told him and the board earlier in the meeting that the “only duty of this canvassing board is to certify the results.”

“Whatever is decided by others outside of this meeting, that’s beyond the control of this board. All we’re here to do is to say these are the results,” North Dakota’s top election official said.

DeWitz, the District 8 GOP chairman, attended the board meeting and planned to meet with the attorney general afterward.

DeWitz, who is a former state representative, didn’t yet know who would represent him in the lawsuit. It won’t be Stenehjem.

The legal fight is the second one involving Burgum and the Legislature. In 2018, the state Supreme Court heard and resolved disputes of executive and legislative authority in the governor’s veto powers and provisions set by lawmakers in several budget bills.