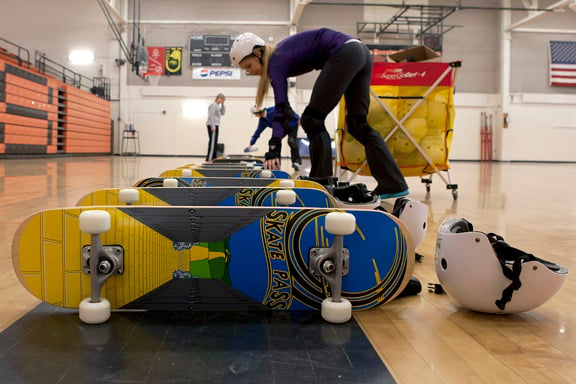 Kaidra Myxter, a student-teacher from Minnesota State University-Moorhead, disinfects equipment after a morning Skate Pass class in the Phil Jackson Fieldhouse. Below, Hailey Enno gets started on a skateboard during her Skate Pass physical education class. 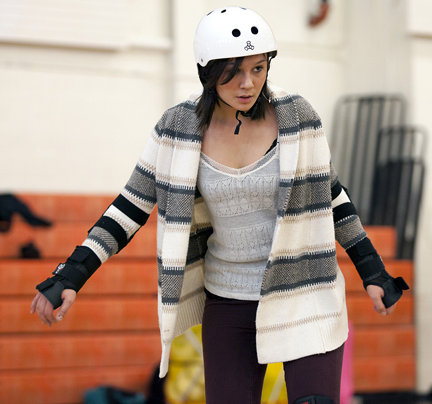 Kaidra Myxter, a student-teacher from Minnesota State University-Moorhead, disinfects equipment after a morning Skate Pass class in the Phil Jackson Fieldhouse. Below, Hailey Enno gets started on a skateboard during her Skate Pass physical education class.

Long before Tony Hawk led a sporting revolution, the skateboard was more aligned with West Coast surfers than the modern beats of punk rock.

Prior to the 1960s, surf shops partnered with roller skate companies to create a makeshift wooden flat board with four wheels so surfers could practice their craft on dry land. It wasn’t until the 1970s that skateboarding gained in popularity and skate parks were first erected.

Just before the new skateboard revolution began in the ’90s, Penny Slagle signed her first contract with Williston Public School District No. 1 to teach physical education. When she was looking for ways to diversify her current curriculum, she attended a conference in Colorado Spring, Colo., and the skateboard soon made its way into the halls of Williston High School.

With the help of federal pep grant for physical education program, Slagle, a 20-year veteran, has reshaped what physical education looks like. Instead of the standard volleyball, basketball, kickball and dodgeball segments of the class, she’s replaced them with the “New PE” and lessons in cross country skiing, curling, archery and snow shoeing.

Skate Pass is the latest to join Williston’s new outlook on gym classes.

“I think it’s the best it’s ever been,” Slagle said of her classes.

Skate Pass is a Boulder, Colo. company that created the program that holds its namesake. It is the first skateboarding program to be approved at the district, state and national levels. Skate Pass is currently taught in 36 states across the U.S., with abroad programs in Germany, Canada, Singapore, the Dominican Republic and Burma.

In Colorado Springs, Skate Pass had a booth setup, which attracted Slagle’s attention and eventually led to the implementation of the program, making Williston the first district in the state to adopt Skate Pass.

A break from the year-to-year routines of physical education has been an experiment of sorts for both teacher and student alike. Slagle and student-teacher Kaidra Myxter, of Minnesota State University-Moorehead, were never skateboarders, which makes Skate Pass a two-way process.

The teachers are learning right alongside the students.

“I never really skateboarded before,” Myxter said. “I always thought I was bad at it.”

As students walked into the gym Wednesday, a line of skateboards sat side-up on the sideline of the Phil Jackson Fieldhouse. The students strapped on helmets, knee pads, elbow pads and wrist pads before stepping aboard.

On the second day of instruction, the class learned the proper way to take off and get both feet on the board. The more-experienced boarders whizzed around the gym with little issue while others tentatively approached the polyurethane board as if they were walking a tight rope.

The class is less X-Games and more of a free skate — developing the basics of balance through straight skating and turning circles around the gym. Slagle offers words of encouragement throughout the time as a student slowly rolls pass the half-court line, occasionally telling the over-zealous ones to slow to down as they softly meet the hardwood floor.

The energy put into Skate Pass by most of her students, especially the older, more mature classes, allow some leeway to the experience. Nobody is disruptive or reckless on the board, rather enjoying the experience of something new after years of monotonous gym class activities.

“It’s like you struck oil,” Slagle said of the excitement the program has brought. “It’s exciting to see these kids try something different and like it. It can be tough to find things that young people like and can be active doing.”

After beginning her student-teaching in January, Myxter’s experience has been equally as rewarding with Skate Pass. None of her high school or college courses were similar to the program, giving her a new outlook on physical education.”

“Wonderful to see how all the kids enjoy it,” she said. “It’s a different way at being physically fit, so why not try it?”