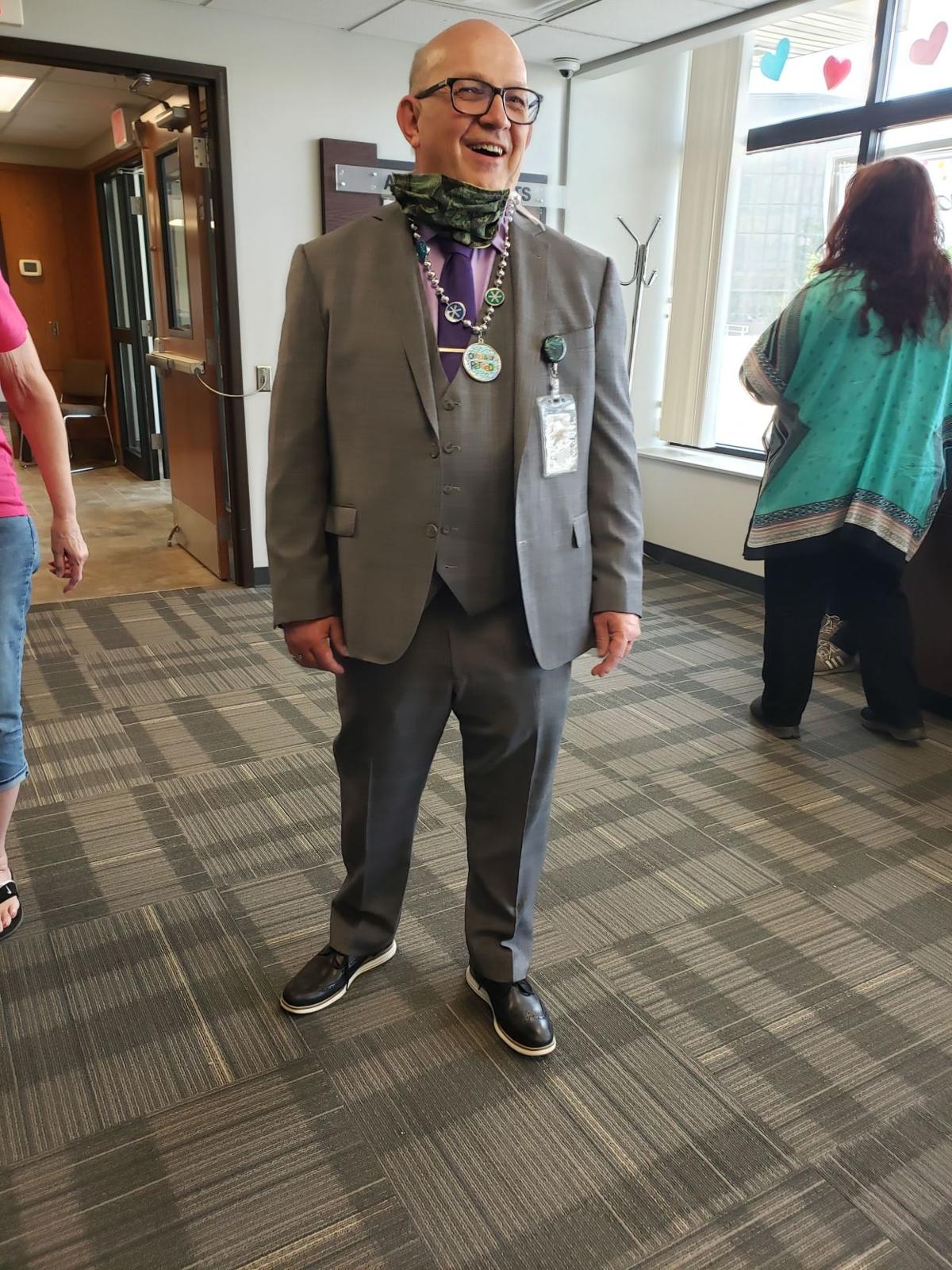 Jim Ryen is retiring from Williams County after nearly 50 years. Here is shown at a socially distanced retirement party held for him on Friday at the Broadway Commons Memorial Room. 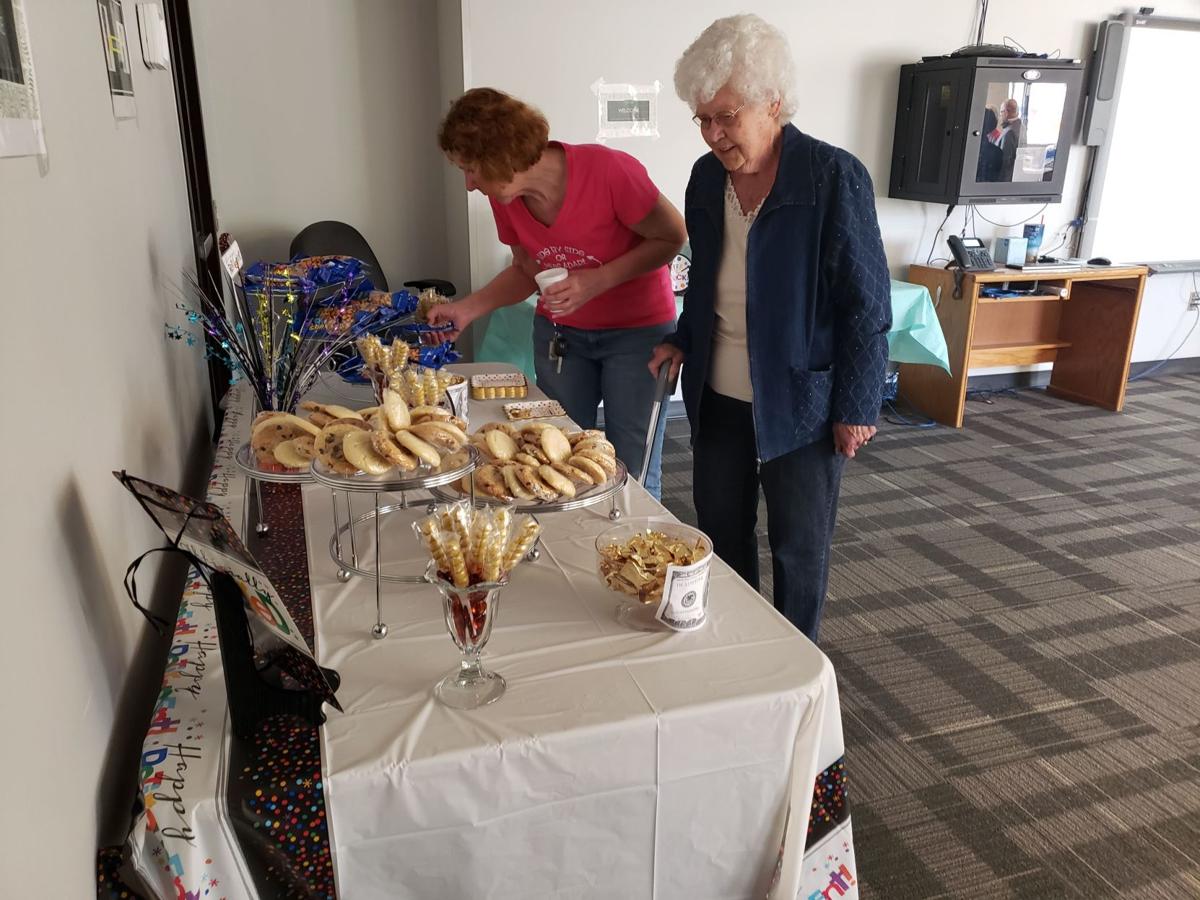 From left, Jan and Vivian Bartlett choose from prepackaged peanuts, cookies, and candies during a retirement party for Jim Ryen. Vivian has known Ryen since he was a child, and said she came to the party to honor his retirement.

Jim Ryen is retiring from Williams County after nearly 50 years. Here is shown at a socially distanced retirement party held for him on Friday at the Broadway Commons Memorial Room.

From left, Jan and Vivian Bartlett choose from prepackaged peanuts, cookies, and candies during a retirement party for Jim Ryen. Vivian has known Ryen since he was a child, and said she came to the party to honor his retirement.

Jim Ryen is retiring with just shy of 50 years with Williams County in one capacity or another. He’s not only seen a lot of changes over the years, but been the instigator of quite a few that have so far endured.

Ryen’s first job with the county has a certain amount of irony. He was tapped by a friend of his dad’s to help varnish the second and third floors of the courthouse during his sophomore year in high school.

It was his first paycheck, and it totaled about $70 for two weeks of work.

Ryen doesn’t remember what he spent the money on, but said he is sure he would have saved at least some of it. Back then, that’s just what parents made their children do any time they got some money.

He also made a photocopy of the check.

“I was just kind of impressed that I’d gotten some money from someone other than my parents,” Ryen said.

A year later, his dad took over the job cleaning the courthouse. Ryen was soon back to work — stripping off all that varnish he’d put on the year before.

“We were doing floor wax instead,” Ryen recalled, chuckling.

At the time, Williams County had maybe 78 employees, and all of its administrative offices were housed in the courthouse.

These days, the county employees 320 full-time, part-time and seasonal staff, as well as having 40-some paid board members. It also has a separate administrative building from the courthouse.

“At the time, Williams County wasn’t oil rich like it is now,” Ryen said. “it was just coming off the very first boom and trying to make things work.”

Officeholders were scrimping on everything they purchased, Ryen recalled, and everyone took on more work, just to get by.

“You had to make do with what you had,” Ryen said.

When the oil embargo hit in the 70s, energy costs were suddenly drastically more expensive, Ryen recalled. To save costs, hours were reduced, and the courthouse windows, which were single-paned, were switched out.

After Ryen became an official county employee, he took over the cleaning and maintenance work at the courthouse.

Among the highlights, he recalls a big flood in the basement, caused when the boiler was shifted from coal to natural gas. That created different stress points for the boiler.

On another occasion, the fancy new boiler got stuck. He went to warn people that there was a runaway boiler and that everyone needed to leave the building, but they didn’t believe him at first.

“I had to say something totally out of character,” Ryen recalled.

Then he went back to the basement, which was filled with steam, to shut off the boiler and fix the problem.

“When the boiler was put in, my dad and I were first to be trained on low pressure boiler systems and how to care for them,” Ryen recalled. “It was put in there because of the Cold War. And from what I kind of gathered, it was bigger than what the courthouse needed because the idea was eventually it would do steam lines to other buildings to provide heat to them.”

That was in the 1960s, Ryen said, but the planned expansion of the boiler system to heat other buildings never actually happened.

In 1982, Ryen decided to run for Registrar of Deeds and won. Among his campaign promises was a pledge to work himself out of a job if he could.

His predecessor had not liked to throw anything away, Ryen recalled, and so among the first changes he made as the new Registrar was to get rid of any records the county was no longer required to keep.

“We took out like four or five grain trucks full of garbage, that, according to the state, we didn’t need to keep any more,” Ryen said.

With the additional space, he could rearrange things to make the office more accessible to the public.

Then Ryen started looking at ways to computerize the office.

“As people left through attrition, we didn’t add them back,” Ryen said. “We gave more work to the computer.”

The big breakthrough, however, came when the Williams County Commissioners at the time allowed Ryen had to seek out a graphic interface so that people could pull up images and maps on a computer. That sounds simple these days, but at that time there were as yet no prepared software programs specifically for that. With some technical assistance, Ryen was eventually able to get Apple machines that he could use to offer graphics.

Hiring the people to continue doing things the way they’d always been done would have cost around $750,000, Ryen said. But he was ultimately able to put together a technology solution for about $500,000.

“The biggest expense at that time was the computers themselves, and getting the program developed,” Ryen said.

Eventually, Ryen had whittled the office’s personnel down to an essential three people. At that point he felt that he had indeed delivered on his campaign promises to work himself out of a job.

“Three people don’t need a boss,” Ryen told then treasurer Kari Evenson. He suggested wrapping his three employees into her office, and changing the office from registrar to recorder.

“Kari was the first recorder in the state of North Dakota,” Ryen said.

Williams County was also one of the first, if not the only, treasurer/recorder.

Later technology has surpassed the system Ryen devised for the recorder functions, but the basic concept remains the same and it is still part of the Recorder/Treasurer’s office.

Ryen took a week off after eliminating his office, and then got a call from Williams County Auditor Beth Innis asking him to come and work for her.

Among the records he has digitized while in the Auditor’s employ are tax foreclosures and marriage licenses. He has also helped renovate the tax roll records and deeds, so that they contain not just the husband’s but also the wife’s name, as well as a more complete property description.

“Everything we have done is basically to help people who need the records,” Ryen said.

Innis said she has worked with Ryen for 26 years, and that he will be missed by many people.

“He has a lot of knowledge in that bald head of his,” she said. “He was my mentor while he ws here. He always tries to make me think logically about things.”

Helen Askim, Director of HR, Communications, and GIS, said dedication is one of the many things Ryen became well-known for during his time with Williams County.

“Jim Ryen has been working in Williams County buildings since 1972,” she said. “So as he embarks on his next chapter, it also marks a milestone for the many citizens and colleagues who have come to value his knowledge and insights. In whatever role Jim was working at the County, he showed the same attention to detail, dedication to the preservation of history and frugality that are hallmarks of a responsible public servant. We are thankful for his commitment to the mission of County government over his entire career and appreciative to the community for celebrating Jim’s service.”

For his retirement, Ryen said he’s planning a few “brown pants” moments. By which he means overcoming a lifelong fear of flying, and a fear of confined spaces.

COVID-19 postponed a trip he was going to take to New York and then to Europe, but Ryen said the trip will still eventually happen.

“None of us know how long we have,” he said. “So I want a little more adventure. I still want the freedom to say no, because I’m not sure how brave I truly am, but I’m going to try and conquer some of my basic fears. I also want to learn to swim and not sink.”

He’s also planning to continue lifelong hobbies such as gardening and cooking.

He’s growing a mostly salsa garden this year, with peppers, tomatoes, and onions, as well as lettuce, peas and squash.

Among recipes he intends to try is a 100-layer lasagna. And brisket. He gave an area pastor a Green egg barbecue grill.

“And he’s been showing me up with all the briskets he’s done on that,” Ryen said. “”I haven’t had time, but now that I’ve retired it will be game on with him trying to perfect the perfect brisket. There’s also some Asian cooking I want to learn to do and develop.”

Ryen said he has enjoyed his time with the county.

“It was the time of my life. The longest relationship I’ve ever had,” he said. “It’s going to be hard to leave. The county afforded me a lot of fun going in different directions that no one else was. It is a darn good place to work, and I hope I’ve left it a better place than found it.”