Submitting this form below will send a message to your email with a link to change your password.

An email message containing instructions on how to reset your password has been sent to the e-mail address listed on your account. 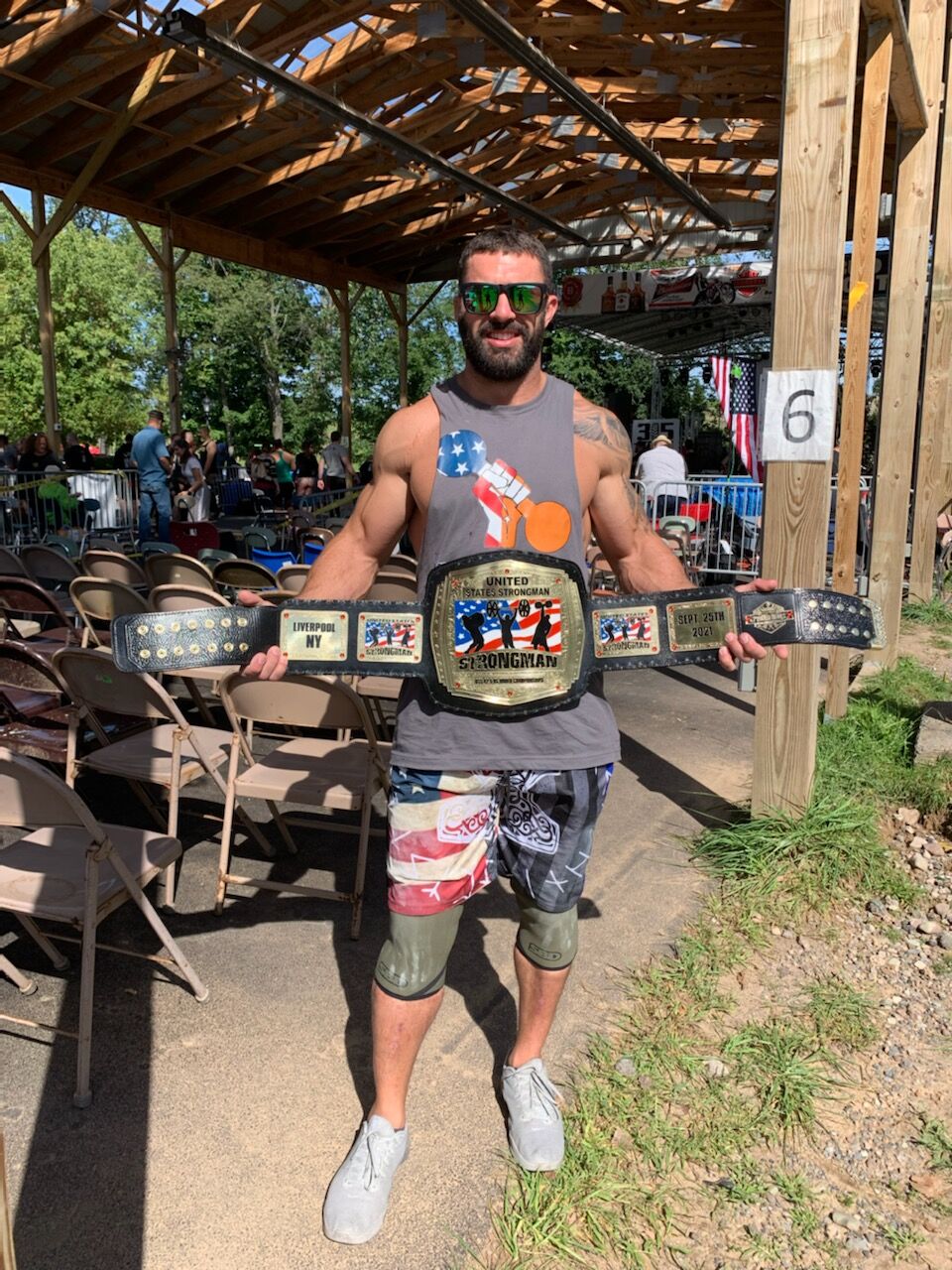 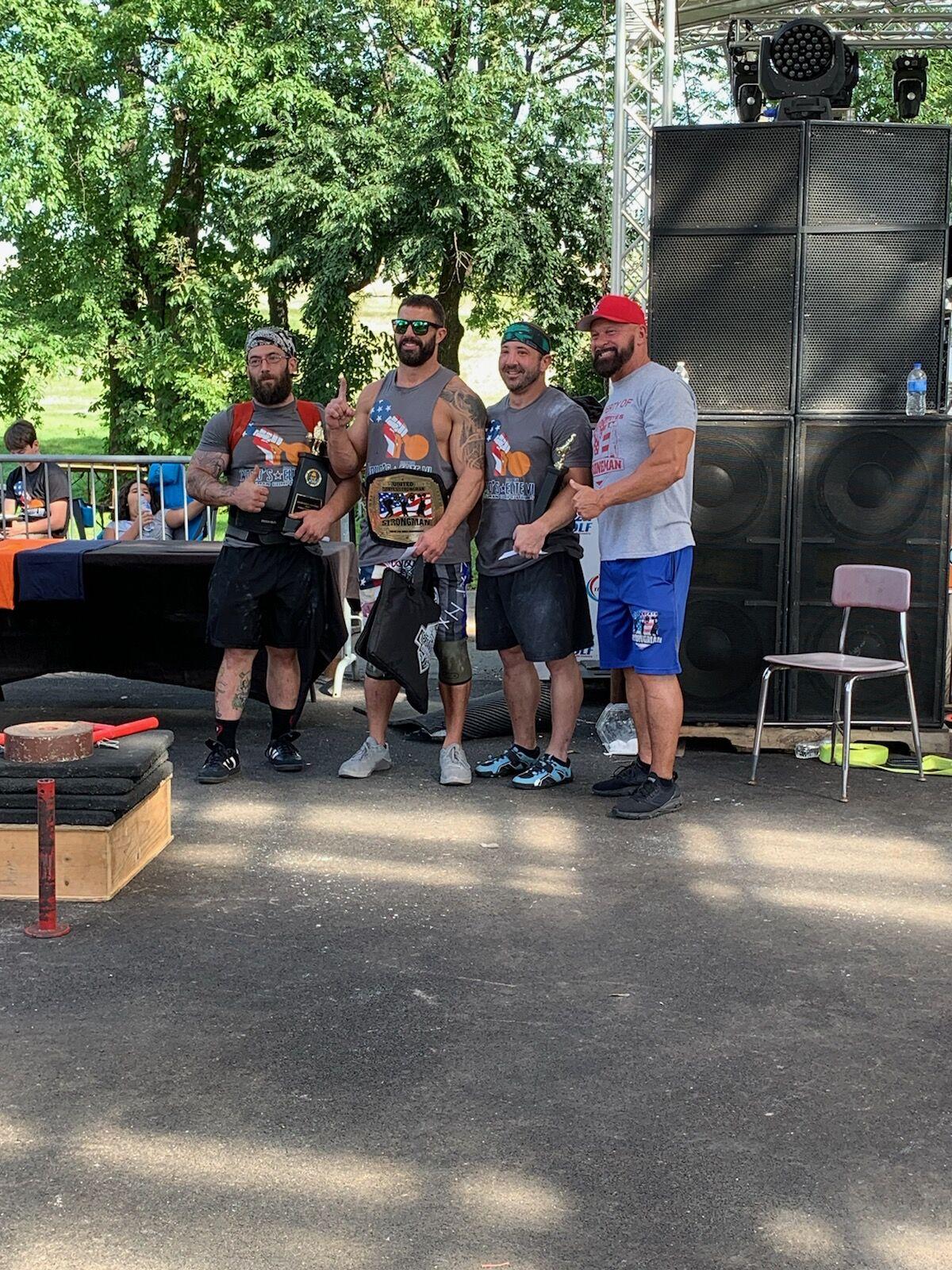 Andy Njos, second from left, poses for a photo with his world championship belt.

Andy Njos, second from left, poses for a photo with his world championship belt.

Williston native Andy Njos makes his living by letting his mechanical cranes do all the heavy lifting on the job sites throughout the Williston Bakken.

However, when it comes to staying in shape, Andy takes the lifting part under his own belt for what he terms as relaxation.

Having graduated from Williston High School in 2001, he recently shared time with his former classmates during a 20-year reunion.

However, it was just back on September 25 Andy made those classmates, his parents and the city of Williston proud as he earned the title as U.S. World Strongman Champion in the 82.5 kilo class by lifting a total of 900 pounds.

He accomplished that on his final lift after pressing 750 on his first lift attempt and on his second he pushed 800 pounds “pretty easy.”

While that is amazing, the story leading up to him even taking part is very interesting, taking a few twists along the route.

Let us backtrack and bring you back with further details on the road to the major world championship lift.

Andy, the son of Mary and David Njos of Williston, first made his way to Alexandria, Minnesota following his time at WHS, to attend the accredited vo-tech school located there.

His area of study was automation, dealing with mechatronics.

This was a two-year program working with nomadic hydraulics and robotics, according to Andy.

A big part of the program was dealing with robotic packing equipment, working on bulk packaging.

Being sought after before graduation, Andy was hired by Fargo Automation, bringing him back to his native North Dakota.

This company built robotic packing equipment, exactly what he had been trained for.

Equipment was built from the “ground up,” using in-house machines.

Andy would stay with this company for three years, leaving there in May of 2006.

It was back home to Williston for his next stop and Andy returned to work for Rich Vestal at Red River Supply.

This was a company he had worked for while in high school.

In his return role Andy would work as a shop mechanic and also filled the position as a truck driver at RRS, working there for only one year.

From there he shifted to another position, now working for Buck Scheele at WISCO, a job that lasted for a period of three years.

Working as a crane operator for WISCO, the 36 months of on-the-job training eventually led to Andy establishing his own crane company.

Having his new business incorporated in December of 2010, it wasn’t until February of 2011 that Andy actually secured his first crane.

Presently his Dacotah West Crane Service has approximately 25 employees, and now operates seven cranes, while at one time he had up to nine in operation.

During what he called the “bust” Andy saw his company downsizing to four machines during that period of time.

Over time he was able to build back with more cranes as business would allow.

His role as owner was overseeing the business, however, from time to time he would jump back in the seat as a relief operator.

Recently he was away from his business for 10 days, having qualified for the World Strongman event.

But, before we go there we need to fill you in a tad more.

You see weightlifting is something Andy has been involved in for some time, using it as a way simply for personal fitness.

Andy told us it started in gym while in college, as he did a lot of it to stay in shape for racing motorcycles.

In May of 2014 Andy was involved in what he termed “a bad wreck,” while competing on his motorcycle in the province of Estevan, Saskatchewan.

He suffered a right tibial plateau fracture, while blowing out his right knee at the same time.

The road to recovery proved to be very long, as after being flown to Mayo in Rochester he would be in intensive care for a period of 45 days.

Over that period of time Andy went through 11 surgeries and since that time he has had three additional surgeries.

He has had one knee replacement, using a cadaver knee that did not take.

The total rehab period for this knee resulted in more than three years of hard work and determination.

With that knee cracking Andy had to go back and would now have “in the range of,” 30 plates and pins put in place, giving him an artificial knee.

That would then take another eight months or so to heal.

During this period of time he had a business partner, however his wife Vanessa worked hard to come up with a printer and computer, along with worrying about her husband from his hospital bed.

“I tried to run it from the hospital,” said Andy, as he discussed the healing time.

Once he had the new knee Andy was involved in physical training and then got back into strength training.

He went back to the gym, working with range of motion with instructors at the Elite Health and Fitness in Williston.

Then as his leg began to heal, his friend Mitch Hughes had started his own gym and Andy opted to become a member.

Mitch was involved in the full-circle strength systems.

Then, for about the last three years, Andy was “still wanting to be healthy,” while taking up an interest in strongman events.

In order to compete with the strong field one has to first qualify.

This is not an event where you can just throw your hat in the ring.

Strongman offers many different styles to train for and you need to go to a sanctioned U.S. Strongman Association event.

Andy competed in nine events leading up to the nationals.

In order to qualify you must place in the top three to advance.

Having done that, Andy found himself competing at the National U.S. Strongman competition on June 5 of 2021 in Minneapolis.

Having reached that level, he would once again need to place in the top three to advance to the world championships.

Andy had it in him and placed third in an event that earned him a berth to compete at the world level in Liverpool, New York, nearly a month ago, back on September 25.

In a community located north of Syracuse, Andy was entered in the 82.5 kilo of the U.S. Strongman Association championship.

Andy arrived three days early in Liverpool for the weigh-in and then went through what he termed as the “weight cut process.”

The world level of competition involves five different lifts, with some using atlas stones or concrete stones weighing from 200 to 320 pounds, over the course of various events each year.

Deadlifts are used with a barbell or another bar, while overhead pressing can be with a bell, or even a log.

It was in the 18-inch Silver Dollar Deadlift that Andy emerged as world champion.

The other lifts at the world level included a truck pull, where a competitor is required to pull a pick-up truck.

The third is a large beer stein replica and each competitor has to hold the 45-pound weight out in front of themselves at arm’s length for as long as they can.

Another is a circus dumbbell, modeled after a carnival dumbbell weighing in at 150 pounds.

This event calls for the competitor to lift from the ground and complete a jerk and clean.

The final is a duck walk, using an implement that looks like a T-handle and you pick up two weighted 300-pound cans, competing for the fastest time.

A competitor would carry and dangle down one container for approximately 35-feet and load to a 14-inch platform and then sprint back to carry the second.

At the world level Andy won two of his five events and was declared the overall world champion in his weight class.

While he was tied in points the other competitor finished second in his events, and the two first-place showings made all the difference for Andy.

It was in the Silver Dollar Deadlift that saw Andy jumping onto the world stage as he pulled a total of 900 pounds, coming in his third lift.

This lift came within 15 pounds of the national record of 915 pounds.

Prior to the world level, Andy had only cleared 765 pounds, finding raw strength to come home as the best among world-level entries.

This was especially impressive as this was Andy’s first world appearance, having been involved since January of 2019.

He competed in his first strongman event back in October of 2019.

After competing Andy goes through a recovery period, while training four days a week.

He pointed out the program is based on building up, followed by recovery time.

While he can work on his lifting up to six days, Andy “always takes Sunday off.”

Now, with only a trophy to share with his friends and family, it’s back to work for Andy.

He finds himself rising at 4 a.m. and is working out from 5-7 a.m. before heading off to work.

We asked him if he was a competitive athlete in high school, and he responded by telling us he “played some hockey into his freshman year.”

But it was motor cross and the sport of motorcycles that eventually led him to where he sits today.

At the same time, the accident proved to be an incentive to get better, while Andy used the setback to his advantage.

We send out a Scope Salute to Andy and Vanessa, and his family, knowing the road to a world championship needs strong support along the path.