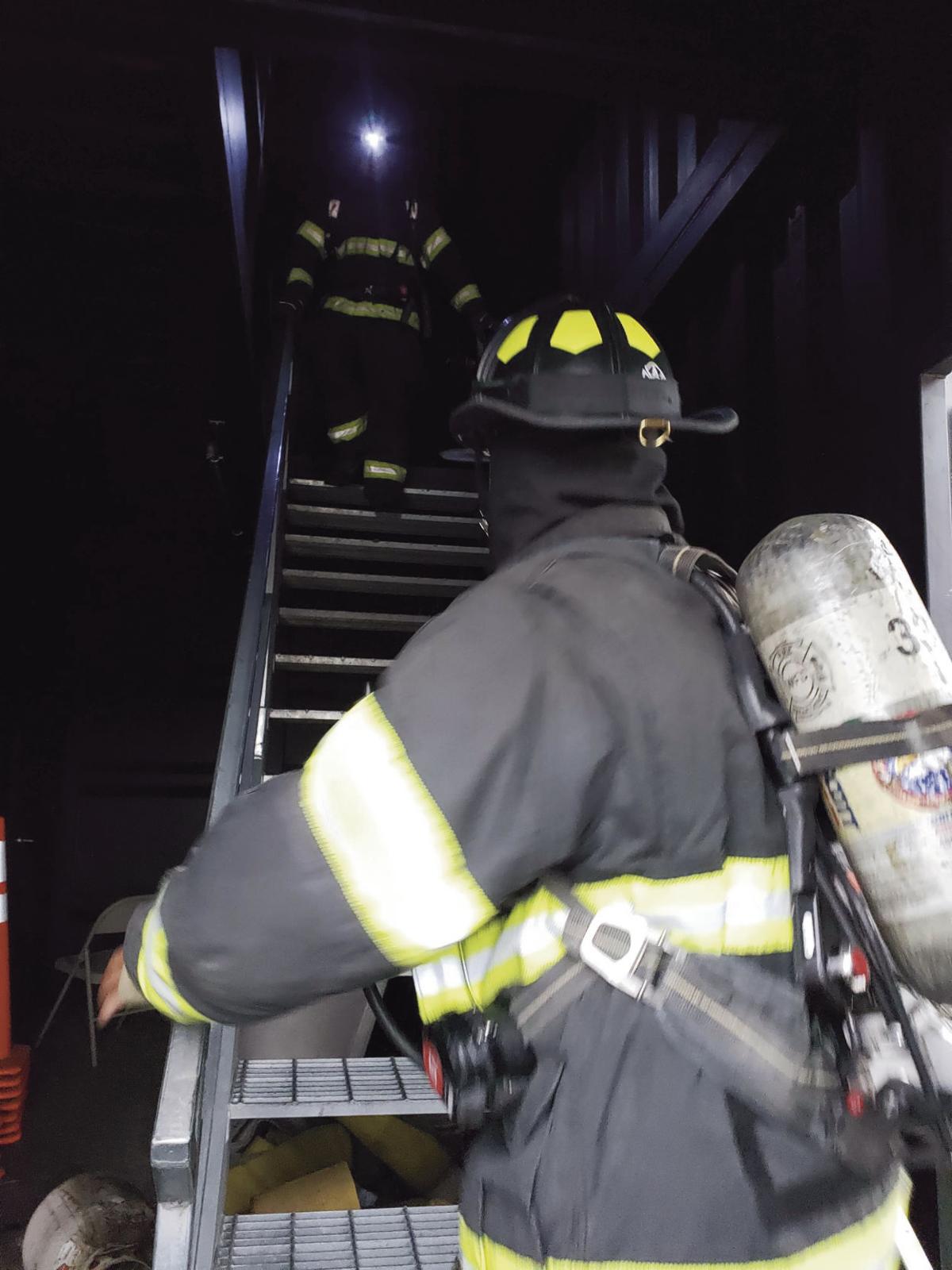 Firefighters climbed the equivalent of 110 flights of stairs at the Training Tower at Fire House No. 2 in honor of 9/11 wearing full turnout gear and self-contained breathing apparatus. 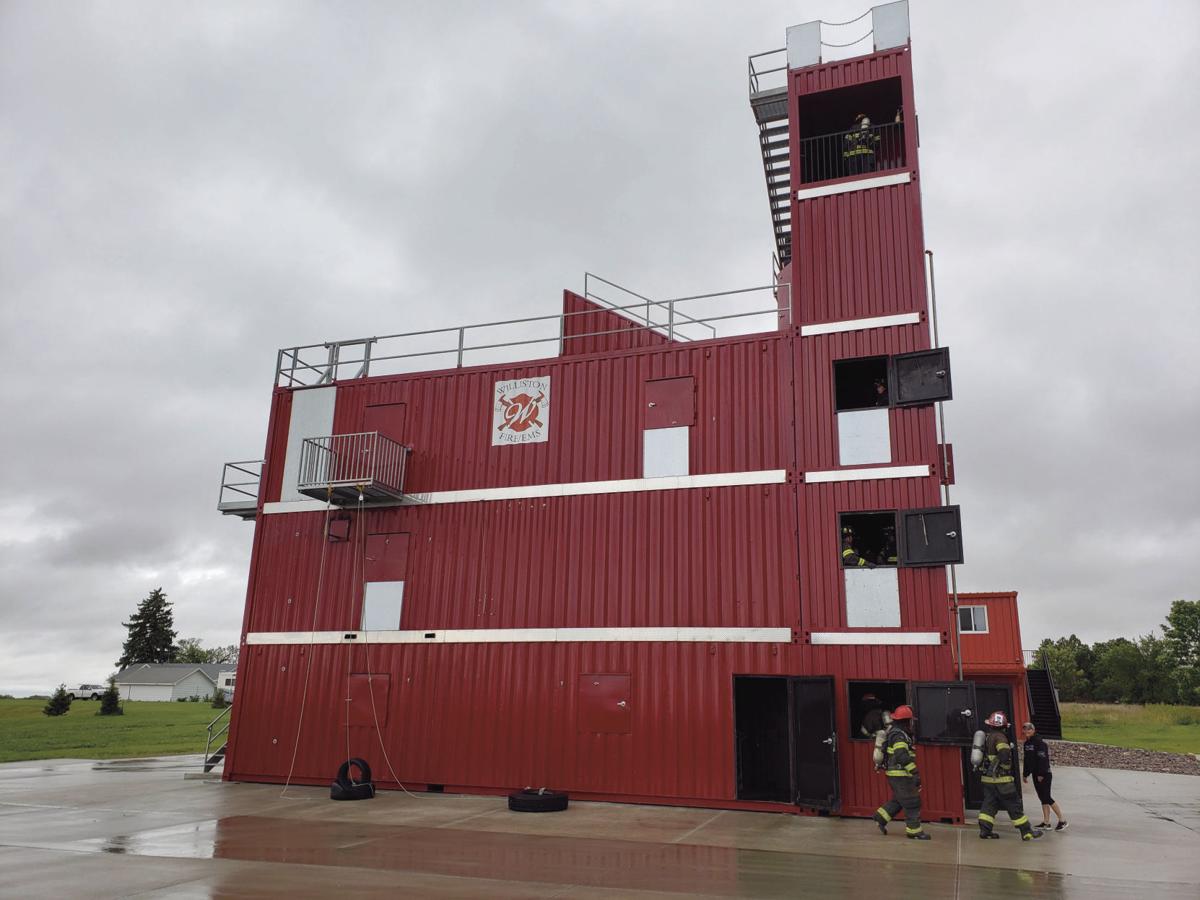 The Training Tower served as ground zero for a memorial stair climb in honor of 9/11 on Wednesday, Sept. 11 in Williston. Firefighters rang a bell at the top of the stairs in a 5555 code, which today is still often used to signal the death of a firefighter. 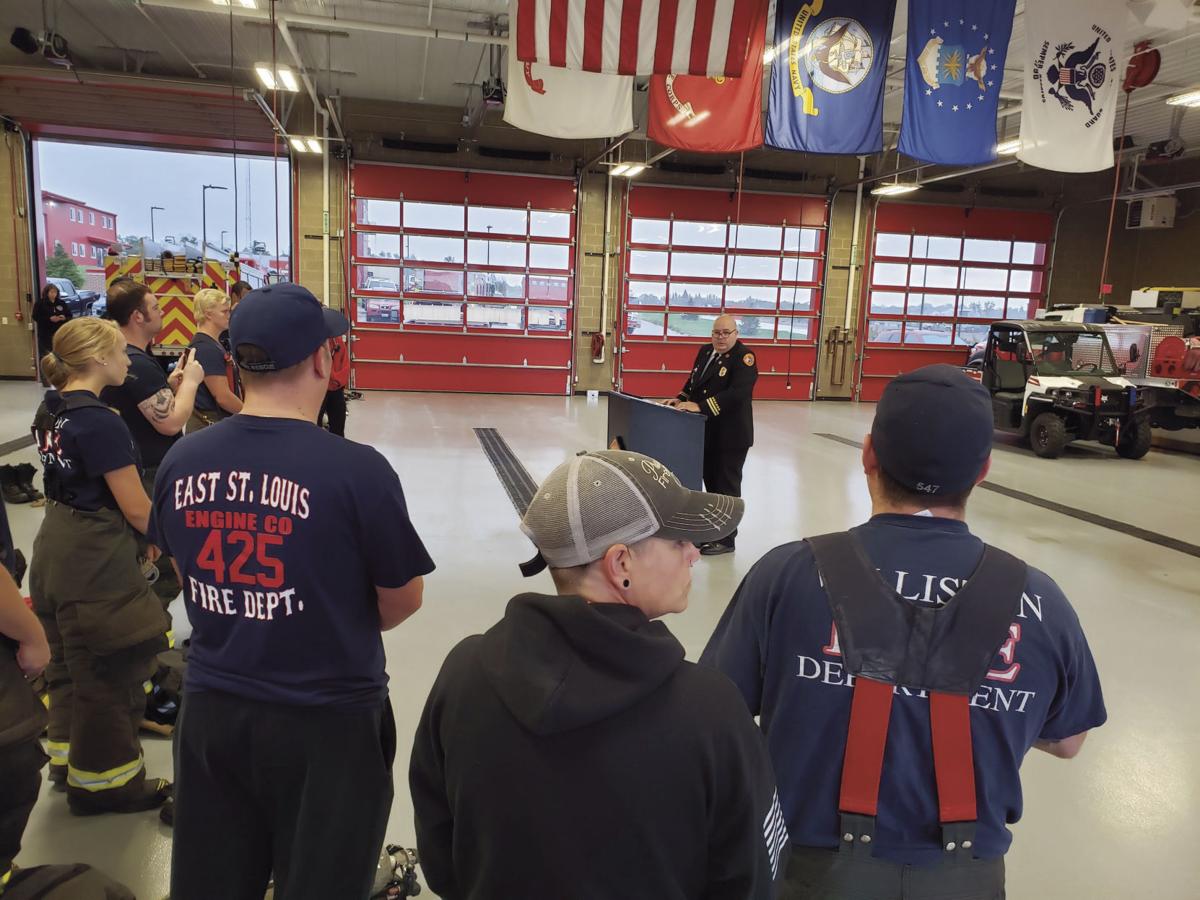 Public Information Officer and Battallionn Chief Mike Fronimos talks about 9/11 during for a memorial stair walk at the training tower located at Fire House No. 2 in Williston. 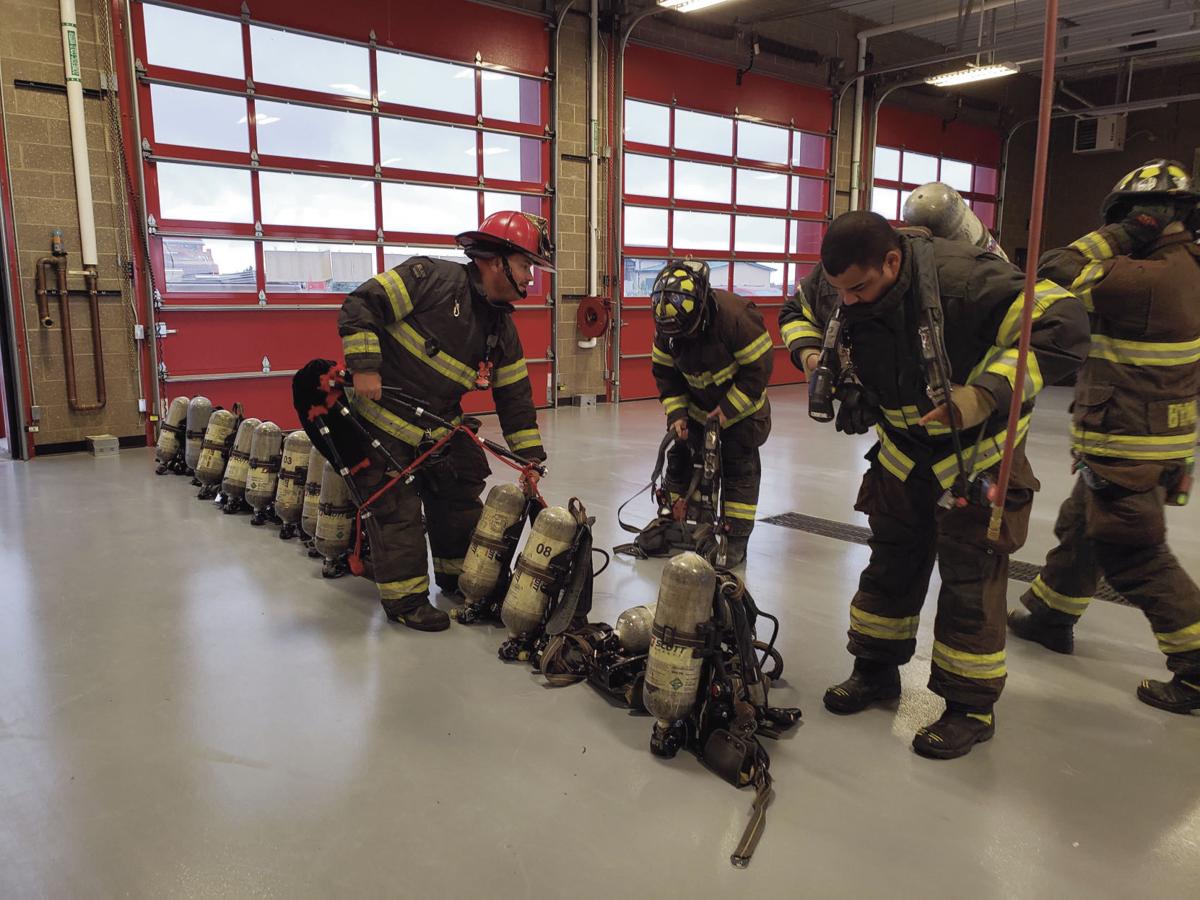 Firefighters donned turnout gear and self-contained breathing apparatus to walk the equivalent of 110 flights of stairs in honor and remembrance of 9/11.

Firefighters climbed the equivalent of 110 flights of stairs at the Training Tower at Fire House No. 2 in honor of 9/11 wearing full turnout gear and self-contained breathing apparatus.

The Training Tower served as ground zero for a memorial stair climb in honor of 9/11 on Wednesday, Sept. 11 in Williston. Firefighters rang a bell at the top of the stairs in a 5555 code, which today is still often used to signal the death of a firefighter.

Public Information Officer and Battallionn Chief Mike Fronimos talks about 9/11 during for a memorial stair walk at the training tower located at Fire House No. 2 in Williston.

Firefighters donned turnout gear and self-contained breathing apparatus to walk the equivalent of 110 flights of stairs in honor and remembrance of 9/11.

Eighteen years ago on Sept. 11, 2001, America was attacked at the World Trade Center. The fires that ensued killed almost 3,000 people, among them 412 emergency service personnel, whose last and finest hour was spent climbing the stairs of the 110-story towers, saving as many lives as they could along the way.

To honor the heroism and sacrifice of the men and women who died on that day, the Williston Fire Department was among departments nationwide participating in a 9/11 Stair Climb on Wednesday, Sept. 11.

Firefighters, police, and emergency service personnel were invited to participate in the climb, which used the Training Tower at Station 2 to stage a 110-flight climb. That is equivalent to 22 times up and down the training tower in Williston.

Firefighters wore full turnout gear and air packs, for the occasion, and some carried equipment with them as well. A firefighter played the bagpipes to lead the procession to the training tower.

Mike Fronimos, public information officer and Battalion chief for the Williston Fire Department, was among organizers for the event, which he said is a very important date not just for all firefighters and emergency responders.

“Everyone in America was affected by that day in one way or another,” Fronimos told the Williston Herald. “And for those of us in public safety, law enforcement, and fire or EMS, we are all affected, whether we know someone there or not. It’s not every day that those firefighters are faced with a challenge like that, but we build that pride and that love of service, and that understanding of the job.”

Tom Dickey, with Williston Fire Department, views the day as a time not only to salute the sacrifices of those who died, but to reduce complacency going forward.

“It’s always in the back of our mind that that happened,” he told the Williston Herald. “Three hundred forty-three firefighters lost their lives, and in all, 2,996 civilians lost their lives. You never want to be complacent. It is our job to do what we have to do, to protect the public and each other.”

Fronimos led off the ceremony with a speech memorializing the efforts on Sept. 11, naming some of the firefighters who died, and explaining why the Williston Fire Department decided it should join fire departments across the nation in conducting a memorial stair climb.

“It is today and this week that firefighters and law enforcement from all across the United States climb in honor of the heroes lost 18 years ago,” he said. “On Sept. 11, they were faced with a tragedy that no one had ever had to face, yet they climbed. Many knew they would never return, that this was their last fight. Yet they climbed.”

Two of the officers, who were avid marathon runners, made it as far as the 78th Floor. They were Fire Marshal Ronald Bucca and Battalion Chief Orio Palmer. In recordings, Palmer said they could attack pockets of the fire and put them out.

“Knowing the peril they were in,” Fronimos said. “Yet they climbed. Hundreds of firefighters and police officers entered those towers, many understanding that this would not only be their finest hour, but also, probably, their last.”

Captain Patrick J. “Paddy” Brown of Ladder 3 sent out the last message of his life just before the first tower collapsed.

“This is 3 Truck and we’re still heading up,” he said.

However there is another name not heard so often. A forgotten hero. Firefighter/patrolman Keith Roma.

“His body was recovered on Christmas Eve 2001,” Fronimos said.

Roma was on an upper floor, surrounded by 11 civilians.

“He was a loving husband and father of two daughters,” Fronimos said. “His second daughter, Mary Michael was born two months after Sept. 11.”

Mike and five other members of Squad 41 were all killed on Sept. 11, while trying to save others.

“Mike’s body was never recovered,” Fronimos said. “They knew the dangers they faced. Yet they climbed.”

There were many others. Lieutenant Paul Martini, firefighters Chris Pickford, Greg Buck and John Schardt of Engine Company 201 in Brooklyn. They were the last unit through the Battery Tunnel before it was closed. They were last seen racing to the south tower. It would collapse on them, burying them under tons of debris.

Fronimos became better acquainted with Engine 201 and Ladder 114 in the months following Sept. 11, 2001, when firefighters volunteered to visit and help support their New York brothers during a time of deep grief and mourning.

“We did chores for them, cooked meals for them, went on runs on the rig with them,” Fronimos told the Williston Herald. “That has progressed over the 18 years to not just calling them friend, but they are truly brothers. That is what we call it, the brotherhood of firefighters, the sister hood … two of the firefighters were even in my wedding back in 2013.”

Fronimos said an estimated 90,000 people responded to ground zero at the World Trade Center’s towers in the months and years following its collapse, to assist with the rescue and recovery operation. More than half of the volunteers have since developed health conditions, including 10,000 who were diagnosed with various cancers associated with exposure to toxins in the effort. More than 240 additional police officers and more than 200 firefighters have died as a result of these complications, Fronimos said.

“It is in their honor that we are here today to remember the sacrifices of these brave men and women who died and not only climbed the stairs of the World Trade Center, but climbed their way to Heaven. And today … we continue to climb.”