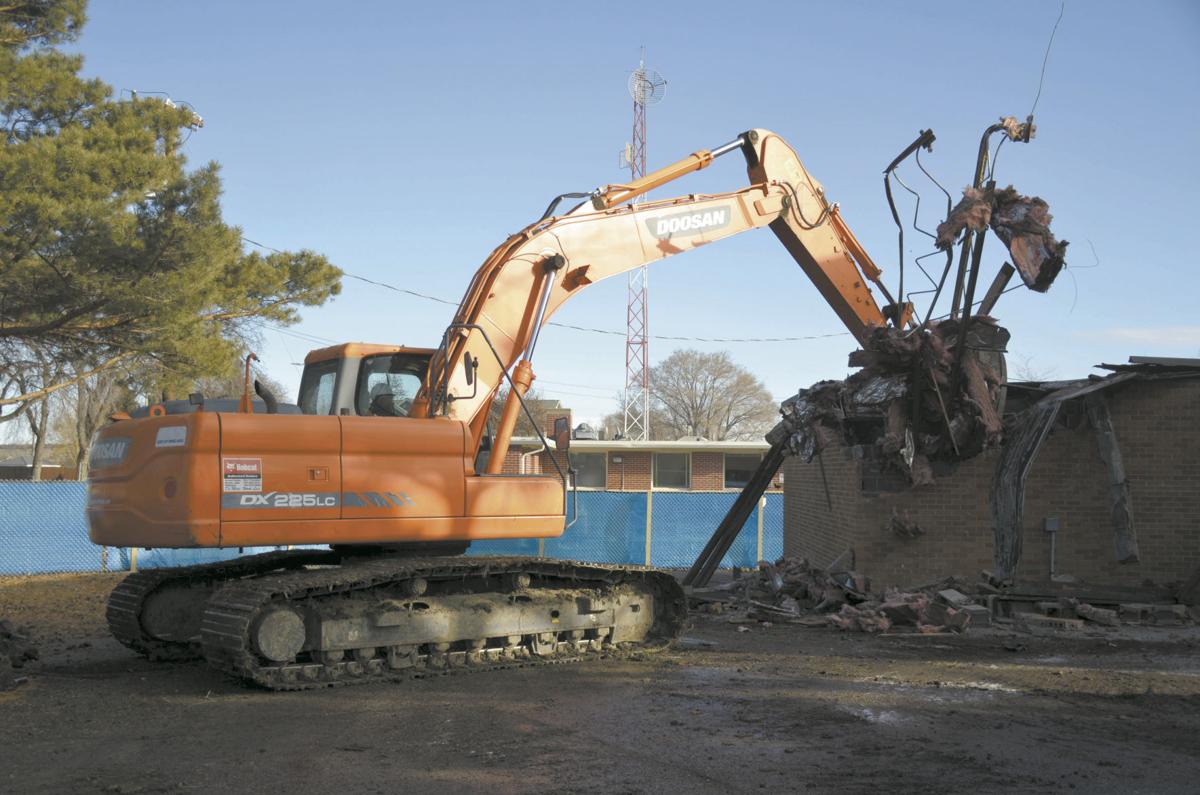 Joe LaFave, owner of Lakeside Builders, tears down a portion of the former Law Enforcment Center in Williston. 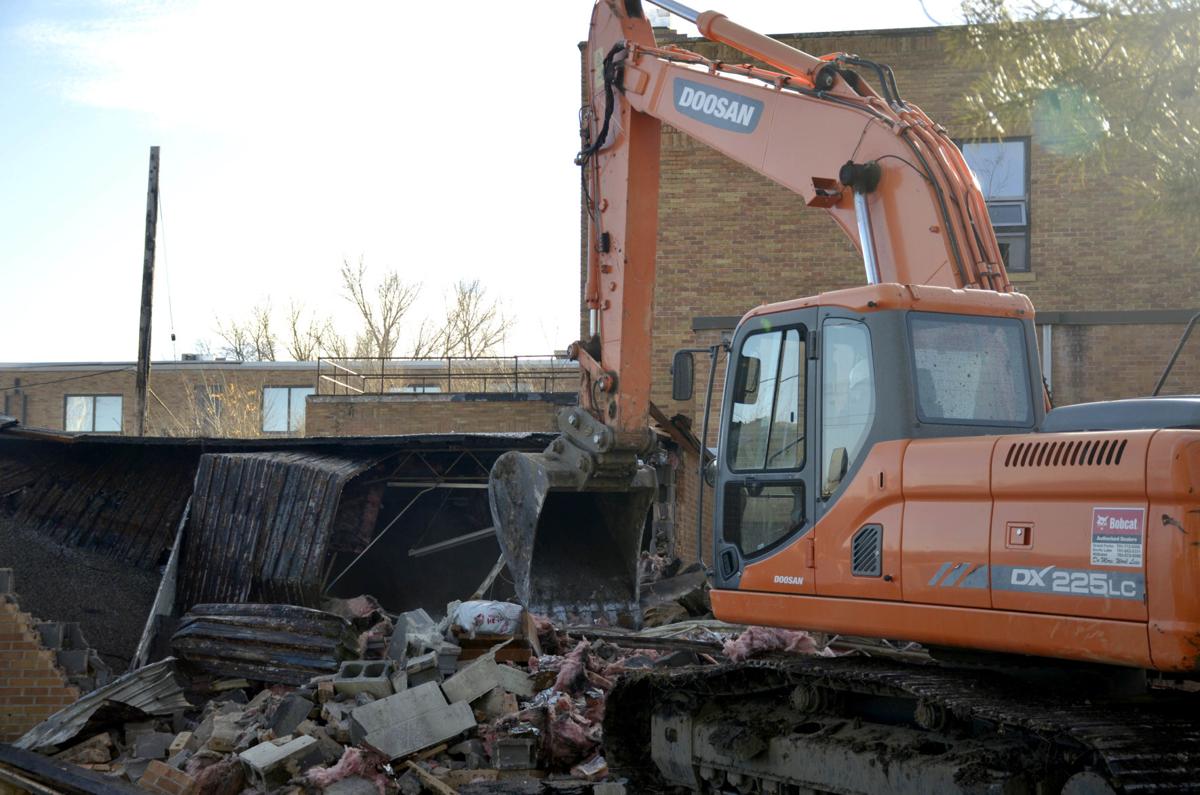 A protective fence surrounds the former Law Enforcement Center as demoliton on the building begins. The fence will protect the surroundong neighborhood and school from dust and materials from the project.

Joe LaFave, owner of Lakeside Builders, tears down a portion of the former Law Enforcment Center in Williston.

A protective fence surrounds the former Law Enforcement Center as demoliton on the building begins. The fence will protect the surroundong neighborhood and school from dust and materials from the project.

Demolition has begun at the former Law Enforcement Center in Williston, bringing an end to the building’s 90 year history.

Established as Good Samaritan Hospital in 1929, the facility was most recently used to house Williston’s law enforcement, but has been vacant for several years.

The city had declared the building dangerous in 2013, and the city has been working with owners JTM Properties since then to devise a plan for demolition of the facility. On Tuesday, Dec. 3, the first bricks fell as crews began the process of tearing the building down. Joseph LaFave, owner of Lakeside Builders LLC in Williston, tore down the first walls himself. LaFave told the Williston Herald that Lakeside Builders is the demolition contractor for the project, and that it is his intention for LaFave Properties to become 50 percent owner of the property when the demolition is finished.

He added that once the building was torn down and removed, the company would be looking at the city’s needs in terms of what the new proposed facility could be used for.

“We intend to be working with the people of Williston as to what might be the best fit for the new building that we intend to build there.” LaFave said. “I just want to do things right and improve things as I got through on these development projects and make Williston a better place because of it.”

LaFave said there were several possibilities that could come from the new building, including potential interest from Williston Public School District No. 1. With the building holding significant history for many in the area who remember it as Good Samaritan, LaFave said he wanted to make sure that those who were interested would be able to keep a memento from the building.

“I’ve actually had several people call and say there were born there and they hate to see it go,” he said. “So if anyone has any personal feelings towards this building, I’m going to save as many of the good bricks as we can during the demolition process and if anyone wants to have a keepsake or build a flower planter or side their house with them, they can have them.”

The first step towards that development, of course, is the initial demolition.

LaFave said that he is working within a specific timeline provided by the city to property owners JTM Properties. LaFave said JTM was given 60 days to demolish the building, but that the time-frame is tight considering the restrictions put in place. LaFave said that for the safety of parents, students and teachers at nearby McVay Elementary, his company was asked not to work during pickup and drop-off times for the school. Additionally, with Cherry Creek Media located adjacent to the property, LaFave said he was asked not to work between 6 and 9 a.m. to avoid interfering with the station’s live broadcasts.

Those provisions, he said, make completing the work within the 60 day time-frame difficult. He said he wants to make sure the work is done safely, which is why a state-of-the-art fencing has been erected around the property, to prevent dust and other materials from affecting the surrounding area.

“I understand their frustration and I’m with them 100%,” he explained. “They’ve been telling these people to get this building down forever, and they didn’t do, and now they’ve put a deadline on it and now they’re going to push it. I just think that at this point in time, as long as it’s being continually demolished in a timely fashion and we’re on it without letting up, that they should work with us a little bit.”

LaFave said he was hopeful that the city would grant an extension, possibly allowing for 90 days rather than the established timeline of 60. The city, however, said the timeline was established with JTM Properties, and that they plan to stick to it. The Herald spoke with City Administrator David Tuan, who said the city has not agreed to any time extensions or changes of condition with the property owners.

“The community has been very patient with the property owner in accommodating the demolition of the old Law Enforcement Center over the past five years. This matter has been through a legal, public process to establish a timeline for compliance that has been agreed to by both the City and property owner,” Tuan said in a statement to the Herald. “A very generous timeline was afforded for the demolition of the structure, yet very little progress has been made until recently. In the event that the property owner does not have the demolition completed by December 14th, the gity is prepared to complete the demolition quickly and efficiently with a private contractor and will assess the cost back to the property owner. At the end of the day, the neighbors and surrounding residents have been more than patient in waiting for this public hazard to be removed and we intend to hold firm to the agreed upon timeline.”

LaFave said that the demolition itself can be completed within two weeks, but that the additional cleanup could take more time. He added that he hopes he can work further with the city to create a timeline to allow the work to be done not only safely, but quickly and efficiently as well.