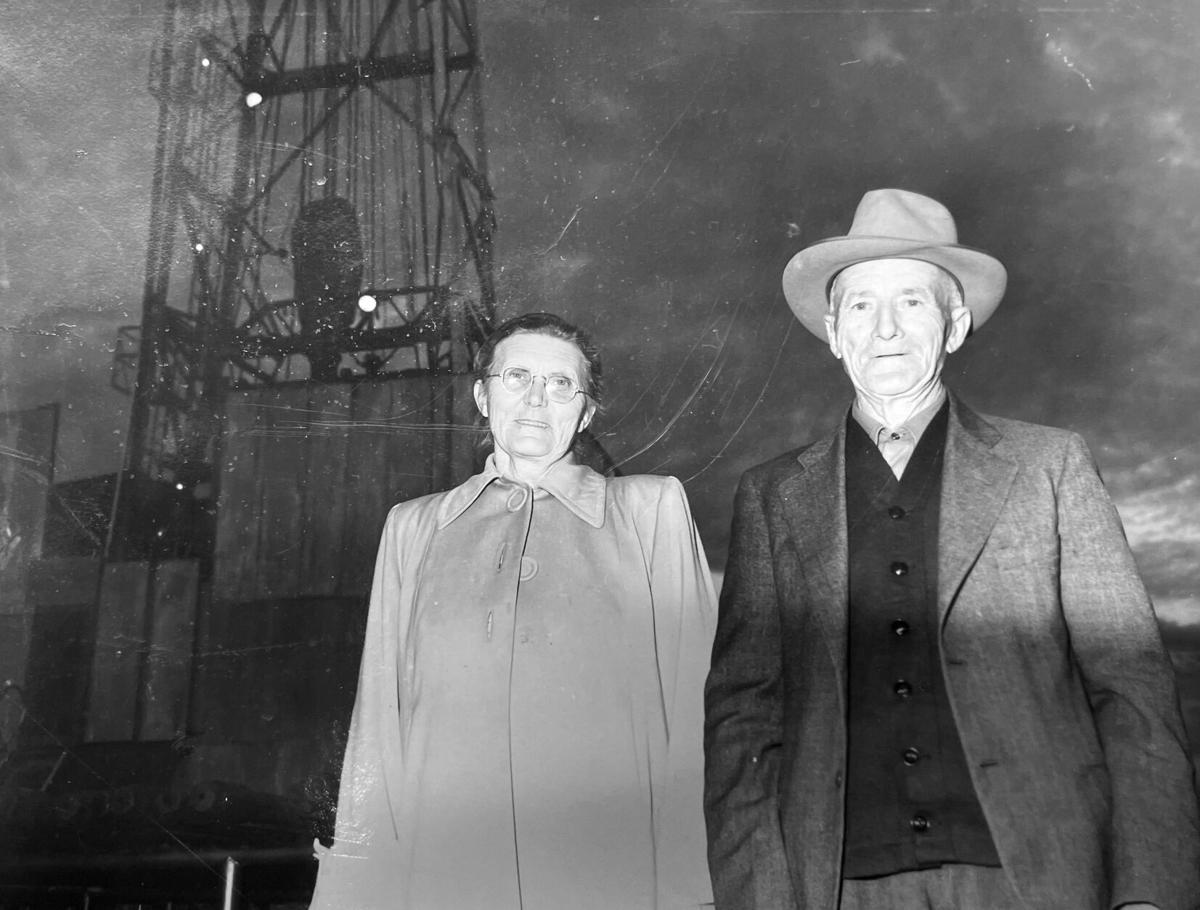 An undated photo shows Math Iverson, right, a Tioga farmer, and his wife, in front of their oil well. Iverson’s brother owned the land where the first well was dug. 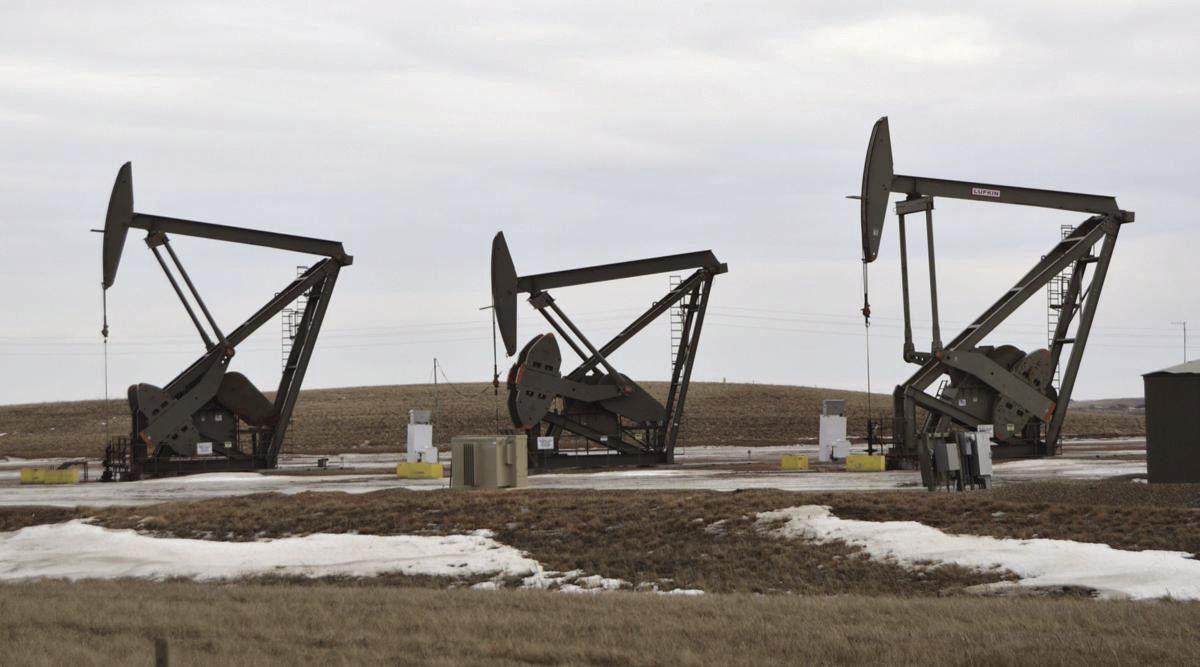 Pump jacks pull oil to the earth's surface from deep underground in February 2020 on the Fort Berthold Indian Reservation.

An undated photo shows Math Iverson, right, a Tioga farmer, and his wife, in front of their oil well. Iverson’s brother owned the land where the first well was dug.

Pump jacks pull oil to the earth's surface from deep underground in February 2020 on the Fort Berthold Indian Reservation.

The Bakken is the oil and gas field most people think of when they talk about oil production in the region. But it was born first out of the Madison, Duperow and Silurian formation, 70 years ago on a beautiful, cold and clear day in the middle of what was an unremarkable wheat field 8 miles south of Tioga.

A stake had been driven into the good earth of that field on July 18 of the previous year. Then a big and hopeful rotary rig moved in directly over that spot, operated by Loffland Brothers Drilling on behalf of Amerada Petroleum Company, which would eventually become Hess, one of the Bakken’s largest operators today.

At 6 p.m. Sept. 3, a drill bit broke the surface of the ground right where that stake was. In industry lingo, the Clarence Iverson Well #1 had just been “spudded” in.

There was no great fanfare at this point. Dry holes had been drilled from one end of North Dakota to another by now, and there was, frankly, a lot more oil action happening in Montana. As promising as this spot might look to the Amerada Corporation, decades of dry holes had instilled a healthy skepticism for many in North Dakota. This would likely be yet another dry hole in a long and expensive string of them.

Regardless, the drill worked day and night. Through fair weather and foul. It passed slowly through layers of earth. Formation after formation. With little to no sign of anything but mud.

Finally, four months and thousands of feet later, a pint of oil was recovered from a drill stem test at 10,448 and 10,803 foot level. The Devonian. It was the first “free” oil ever found in North Dakota.

Free in this context, of course did not mean money. It meant free of water, free of mud. Drilling this hole had by now cost nearly a million dollars. Well above the projected $208,708 budget. That made every drop of this oil precious.

But did it mean anything? Or would it be yet another flirtation, full of nothing but unkept promises?

At this point, with an unprotected hole 10,000 feet deep — kept open by only the weight of good drilling mud — the risk of collapse was tremendous. Yet the company’s officials made a courageous decision at this point. They would keep drilling as deep as they could, hoping for another, better flash of oil and gas to show.

Until, at 11,744 feet, the face of a core bit finally broke off. The drilling was over. They could not go any deeper now. The risk was too great. And, no more oil had shown.

It was time to set the casing, now and test all the possible shows. In the midst of that effort, a blizzard blew in, dumping snow everywhere and blocking the way in and out of the location where history was about to be made. But no one knew that at the time. They hoped, but for all they knew, it was yet another dry hole.

Repairs were made to the soon-to-be historic well as soon as roads could be cleared and workers returned to the rig. The first test perforations were set in the range of 11,706 feet to 11,729 feet.

No oil and gas.

The perforations were cemented over and a new set prepared just above that. Still nothing.

Word spread quickly. In an account by Bill Shemorry, editor at the time of the Williston Press Graphic, several hundred spectators had gathered around a scene lit by a flare that could be seen from 10 miles away. The noise of gas escaping to feed that flare was so loud, spectators had to shout to be heard.

Shemorry didn’t get to stick around. He had to drive to Minot that night to develop his negatives and get the plates engraved. He passed through a football-length of flooded-out highway to get to Minot with his historic shots, which would ultimately be published around the world and rest in the archives of North Dakota legend.

Clarence Iverson No. 1 was North Dakota’s first discovery well, and its first commercially viable well. It would produce 585,000 barrels of oil in a 28-year lifespan. Its production, however, was not from the Bakken.

It would take many years and many advancements in technology before the Bakken would finally emerge as the region’s primary source of oil production, ultimately landing North Dakota in the No. 2 spot for oil production in the nation, and emerging as a powerhouse in eastern Montana.

Since then technological advancements have continued to advance the Bakken, and, today, it’s rig economics have at times exceeded those of Texas, the nation’s No. 1 producer, according to stats published by the Energy Information Administration.

The Clarence Iverson well didn’t only fuel the oil and gas industry in North Dakota, of course. It also helped boost Montana’s oil and gas industry as well, by pointing the way to deeper and deeper wells. Ultimately, when the Bakken formation was better defined, a significant portion was found to lie under northeastern Montana as well.

That has set the stage for a regional oil and gas industry that can provide a wealth of job opportunities for decades to come.

Looking back at 70 years of oil in North Dakota

In April 1951, the North Dakota landscape changed forever with the discovery of oil. We look back at the discovery through the Herald archive …