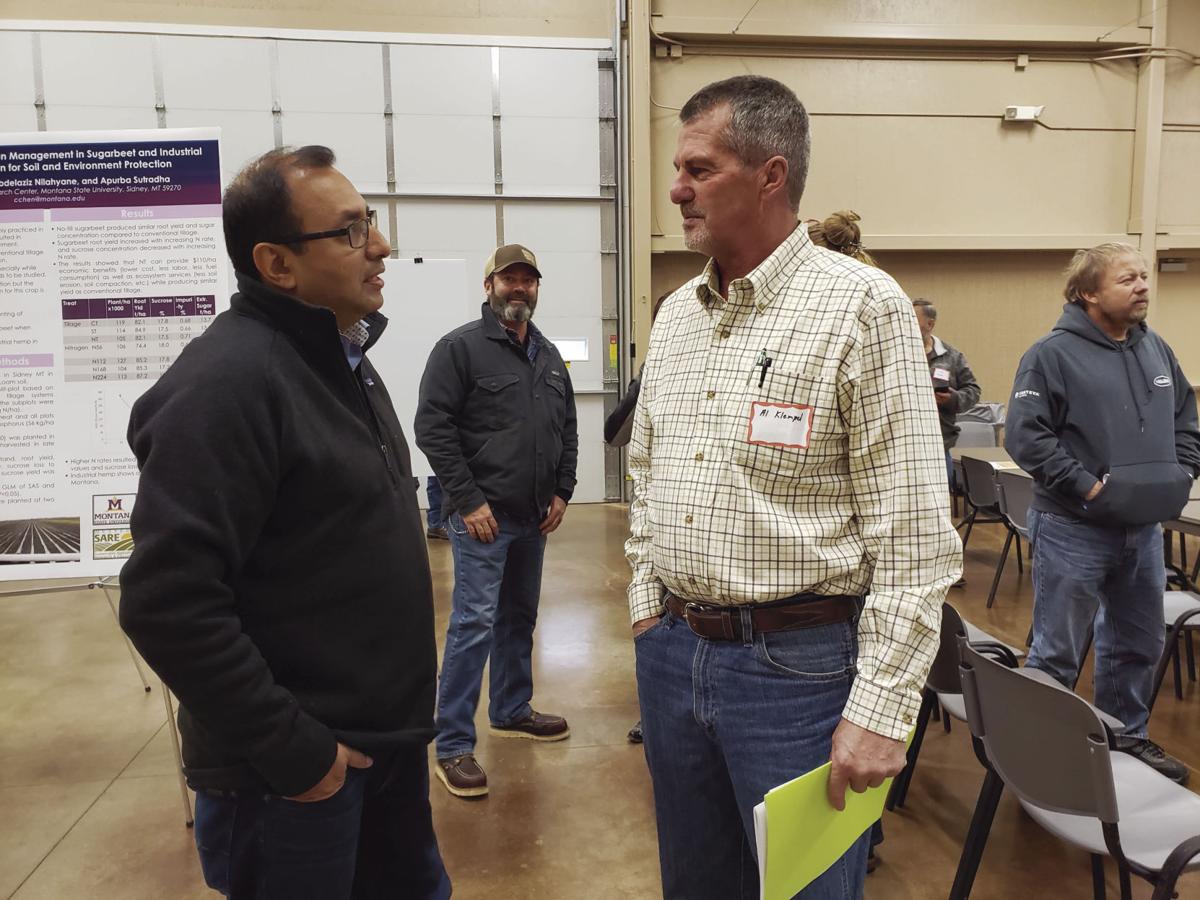 John Piracha, left, discusses hemp with an area grower, Al Kempel, after his presentation during the MonDak Ag Research Day in Sidney. 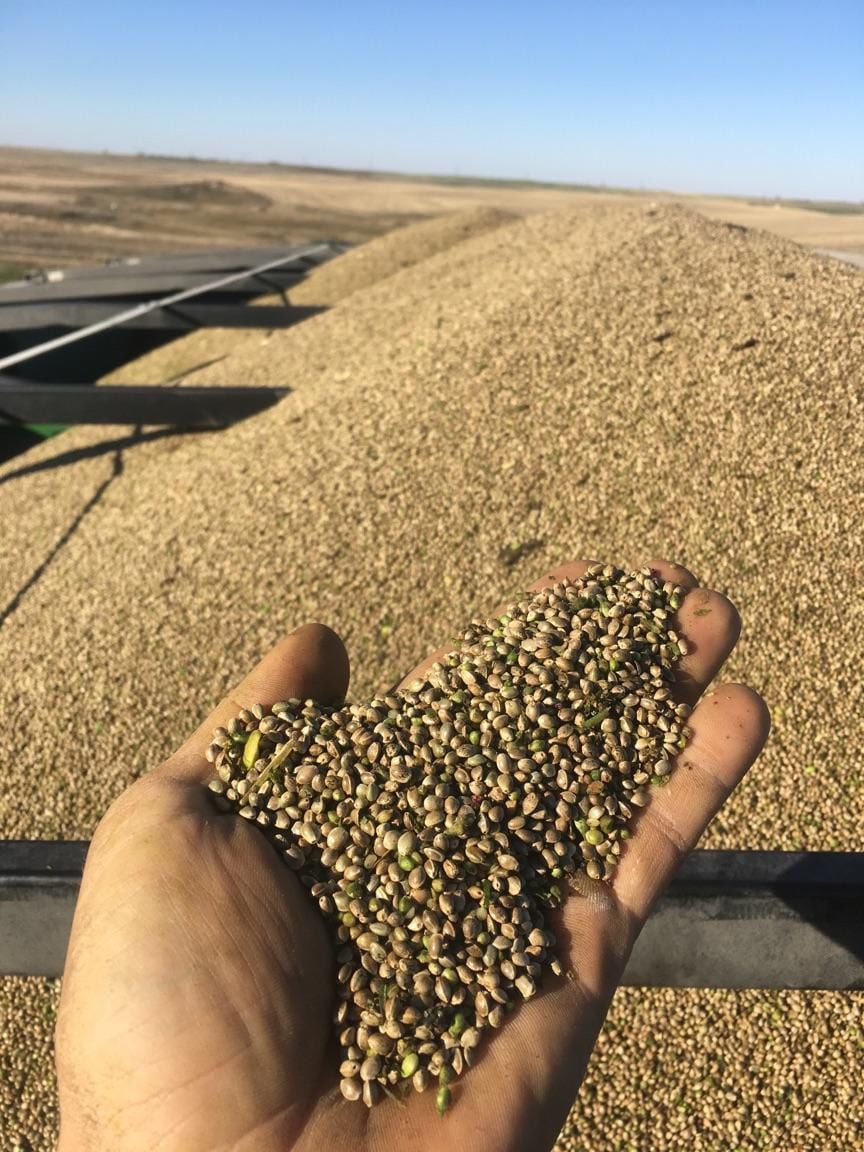 An area farmer holds up hemp seeds he planted last year in a field in Williams County in this file photo. Hemp has been popular in the U.S. for health food and organic clothing, but could also open up entirely new and innovative markets now that the 2018 Farm Bill has made it legal. Growers, however, will still have to register their crop with their state's Department of Agriculture.

John Piracha, left, discusses hemp with an area grower, Al Kempel, after his presentation during the MonDak Ag Research Day in Sidney.

An area farmer holds up hemp seeds he planted last year in a field in Williams County in this file photo. Hemp has been popular in the U.S. for health food and organic clothing, but could also open up entirely new and innovative markets now that the 2018 Farm Bill has made it legal. Growers, however, will still have to register their crop with their state's Department of Agriculture.

Overall crop acres for hemp dropped in both Montana and North Dakota for 2020, but significant progress was still made in that sector despite temporary setbacks due to market conditions.

North Dakota, for one, gained 11 processors in 202, most of them for CBD oil. In Sidney, Montana, meanwhile, American Harvest opened its doors for a strategy focused around what it calls whole plant. utilization.

John Priracha, CEO of the company, told the Sidney Herald the pandemic did force the company to scale some of its plans back a little. But the company has still made good headway and is moving forward selectively with sales and distribution of new and innovative hemp products.

Most of the company’s gains have been for fiber-related products, Priracha said.

That fits in with overall trends in Montana. Most of the 12,000 acres it grew in 2020 were for fibers and grains.

In North Dakota, however, things were different. Most of the gains on the processing side were for CBD oil.

“(Fiber and grain) are great opportunities for farmers, but that is not where the emphasis seems to be for now,” Goehring told the Williston and Sidney Herald. “I’ll hear about CBD 10 times for every time I hear about hemp fiber or seeds.”

It’s a balance that could change in the future. North Dakota is working on a feed study, to verify that hemp grains and fiber can be fed to livestock.

“It seems silly because people are eating it, but they are not willing to sign off on an animal or pet eating it yet,” Goehring said. “We are aware and we have heard ads from people saying, hey give your dog or cat some CBD or give them some hemp dog food. But it’s not legal. Not yet.”

The feed study isn’t really about nutrition, Goehring added, but about safety.

“FDA requires this, even though everyone in the world is consuming it,” Goehring said. “Animals in some cases have eaten it. Nothing is dying or walking around high. So it’s one of those deals. You just have to do the study to show it is safe to give to animals.”

On the Montana side, meanwhile, MSU is working on a study to quantify the properties of hempcrete for builders. That could contribute to developing a homegrown market in the MonDak for a new building material. One that’s not just ecologically conscious, but that offers interesting advantages over traditional building materials.

Hempcrete is made by combining the tough woody stems of hemp with a lime-based binder in setup forms. The resulting material is strong and lightweight. It’s also resistant to fire, mold and pests. Hempcrete’s use is already becoming common in Europe and Asia, but the material has not yet established a strong presence in mainstream American markets.

Andy Gray, Hemp Program Coordinator for Montana, said he expects fiber to remain the primary acreage in his state.

“That lends itself better to our farming practices and norms," he told the Sidney Herald. "CBD is always going to have a place, I think. But they are not going to have the volume on an acre basis.”

Montana was also the first state in the nation to establish a hemp checkoff program. Growers approved the plan in 2020, which will direct 1 percent of sales to market research and development efforts.

Montana and North Dakota officials have been encouraged so far by recent revisions to USDA’s final hemp rule, issued in the waning days of the Trump administration.

“It looks favorable so far,” Gray said. “They recognized that there are differences between different regions and different states. The flexibility to allow states to make hemp programs fit their state is a positive.”

“We are still going through the final interim rule,” Goehring said. “The devil is always in the details. But, right now, with the changes they made, we are about on par with them. We would have continued on our pilot program anyway until this comes to some resolution, but now we can just move forward.”