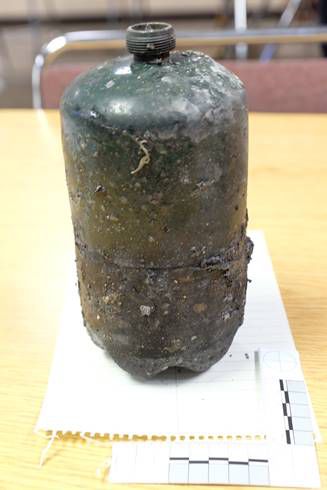 A propane canister that the Morton County Sheriff's Office said was used as an improvised explosive at the Dakota Access pipeline protests. 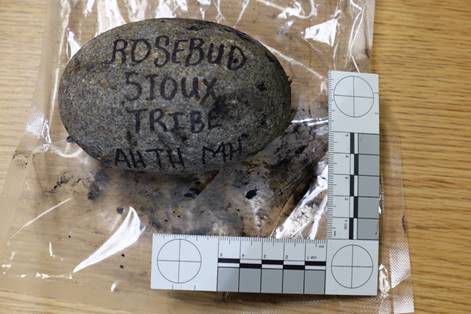 A rock that the Morton County Sheriff's Office said was found at the site of a clash between Dakota Access pipeline protesters and police.

A propane canister that the Morton County Sheriff's Office said was used as an improvised explosive at the Dakota Access pipeline protests.

A rock that the Morton County Sheriff's Office said was found at the site of a clash between Dakota Access pipeline protesters and police.

Standing Rock Sioux tribal members claim that a woman’s arm was nearly blown off by a concussion grenade. However, Morton County authorities are disputing the account, and claim it is more likely due to improvised explosives set by protesters at the Highway 1806 Backwater Bridge at about 3 a.m. Monday morning.

A media release from Standing Rock says they are praying for Sophia Wilansky and her family after she sustained injuries to her arm. “Doctors are working to save her arm,” Standing Rock Sioux Tribe’s Chairman Dave Archambault II said. “An estimated 300 water protectors were treated for injuries from Sunday’s nighttime attacks. These injuries were the direct result of excessive force by police over the course of 10 hours. At least 26 seriously injured people were evacuated by ambulance to three area hospitals, our medical teams on the ground verified.”

Morton County authorities, however, disputed Archambault’s claims, saying 60 protesters were reported near the Backwater bridge at 3 a.m. Monday, and this time some of them set off improvised explosive devices.

Two males and a female were seen using a barricade behind a burned vehicle to hide their activity, Morton County authorities said. They didn’t respond to orders to come out, even after officers tried using bean bags and sponge rounds. Meanwhile, other individuals approached the area, rolling metallic cylinders into the barricade. There was an explosion, after which several individuals ran to the area, pulling a female from under the burned vehicle and fleeing.

The North Dakota Bureau of Criminal Investigation, with support from the Federal Bureau of Alcohol, Tobacco and Firearms, recovered three propane canisters from the site, as well as glass jars consistent with Molotov cocktails and heavy rocks.

Morton County authorities released additional details about their use of water hoses. They said they heard radio announcements from the camp ordering all females to leave, as individuals with guns were coming. Live streaming was also to cease. That suggested protesters were going to try something they didn’t want recorded, perhaps charging the line to flank officers in the field.

Tear gas had been ineffective at crowd dispersal due to wind, so field commanders decided to try water, authorities said.

They also said protesters were warned repeatedly that water would be used, but refused to leave, instead saying things like, “Hit me! Hit me,” “We are willing to die for this,” and “We get paid for this.”