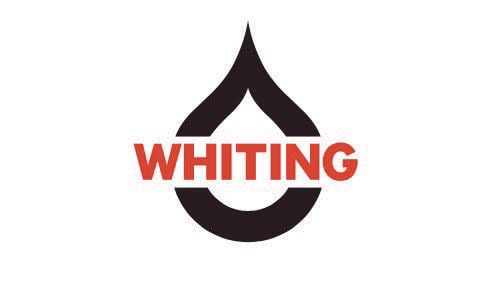 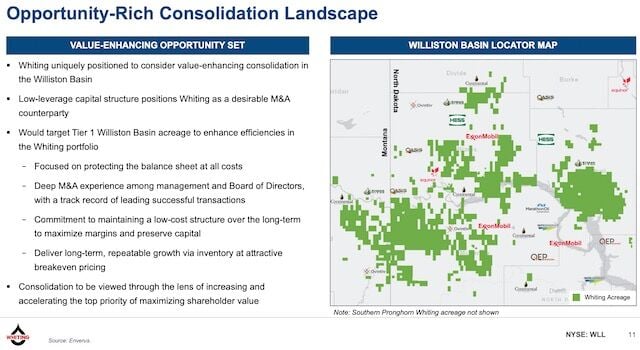 A map in a newly issued investor presentation for Whiting Petroleum notes that the company's holdings are ideally positioned for mergers and acquisitions.

A map in a newly issued investor presentation for Whiting Petroleum notes that the company's holdings are ideally positioned for mergers and acquisitions.

Whiting Petroleum Company emerged from Chapter 11 on Wednesday, Sept. 1, with about $3 billion less in debt, and billed itself in a newly issued investor presentation as a “dominant Williston Basin Independent” well-positioned for future mergers or acquisitions.

Whiting Petroleum was the first publicly traded shale oil producer to file for bankruptcy amid the demand-crushing coronavirus pandemic and a Saudi-Russian price war aimed at market control. It filed for bankruptcy in April, a decision that followed a number of cost-cutting moves, including layoffs, the previous year.

Under the terms of its reorganization, Whiting is authorized to issue 500 million shares, 38.1 million of which are common stock outstanding.

Shareholders are getting one share for every 75 they owned prior to the restructuring, and about 3 million incremental shares are being reserved for potential distribution to unsecured claimants with pending claims.

The company has a new credit facility of up to $750 million, of which $425 million was drawn upon emergence. This loan is due by April 2024, and the company’s borrowing base is set to be re-evaluated next year in April.

In its emergence presentation for investors, Whiting said it has taken “proactive steps to refresh its leadership” and that it is “laying the groundwork to capitalize on the strengths of its portfolio,” which should position it to become a “leading upstream operator in the broader Rockies.”

It will aim to reduce costs and become “the low-cost basin operator,” and pursue “in-basin scale efficiencies” with “sustainable shareholder returns.”

It will also remain among top Bakken producers, according to charts comparing it to peers like Oasis, Continental, Hess, QEP and others, and its holdings will present an “opportunity rich” landscape for “value-enhancing consolidation” in the Williston Basin.

A map shows that the company’s holdings are adjacent to many of the Bakken’s biggest oil and gas companies, and the presentation suggests that positioning offers ideal opportunities for mergers and acquisitions, particularly now that it’s not so heavily laden with debt.

Peterson is a 40-year veteran of the oil and gas industry. At one time, he was also the top executive for Kodiak Oil, which Whiting bought for $3.8 billion in stock and $2.2 billion in debt in 2014, a purchase that left Whiting with so much debt it led many analysts to speculate about the company’s longevity.

Peterson will replace CEO and chairman Brad Holly, a former Anadarko executive, who was given a $2.53 million severance package.

Prior to Kodiak, Henderson was also Director of Finance for Aspect Holdings and Director of Accounting Services at Anadarko.

Chief Operating Officer Chip Rimer, who has been Whiting’s COO since 2018, will stay on board the newly reorganized company.

The company will also have a new board of directors led by chairman Kevin McCarthy, who is vice chairman for Kayne Anderson Capital Advisors. This board is 50-50 male and female, the investor presentation notes.

The 2021 business plan for Whiting, which comes with the caveat that new management hasn’t confirmed the reasonableness of these published numbers, suggests that the company’s gross profits are on track to be in the $300 million range, once operating expenses of about $320 million are accounted for. The newly reorganized company’s first earnings call will be in November.

Whiting is now trading on the NYSE under the ticker symbol WLL. Its shares were at $19.50 Wednesday afternoon.