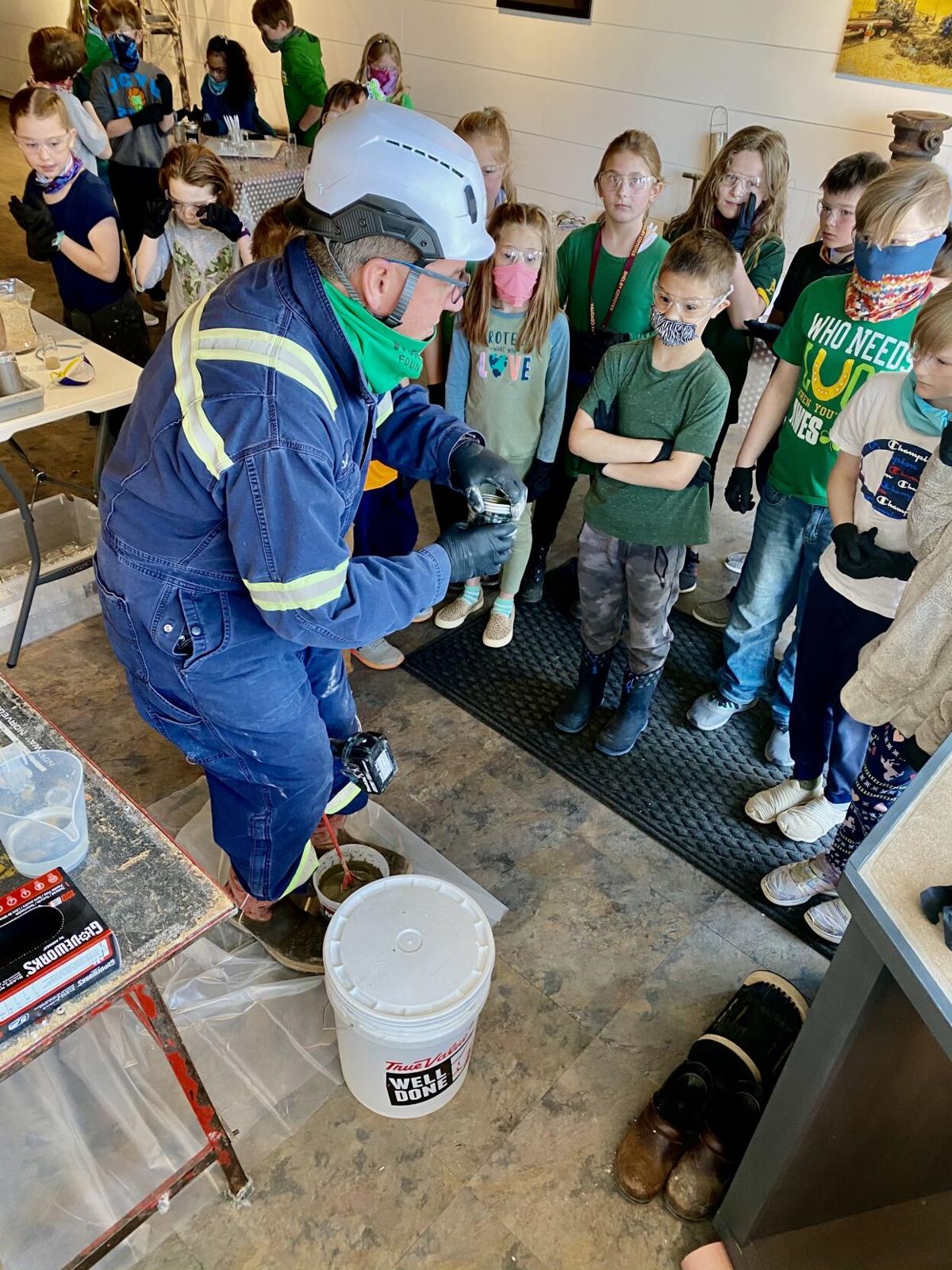 Curtis Shuck, center, founder of the Well Done Foundation, talks with elementary students in Montana about the process of plugging abandoned and orphaned wells. Some of the students will be returning to see the real thing happen for Earth Day, when the Foundation will plug its fifth well. 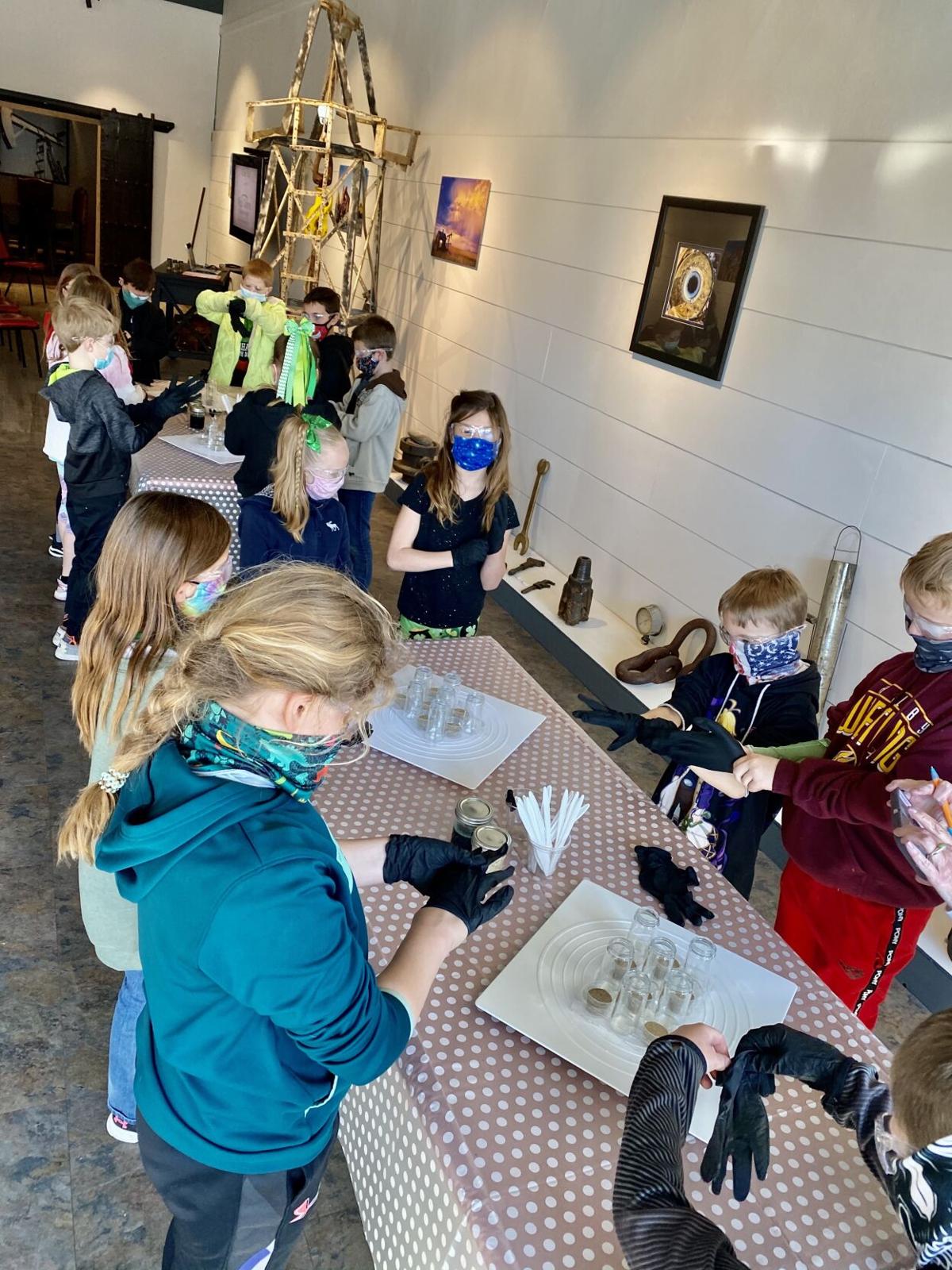 Students try their hand at plugging a miniature "well" with the Well Done Foundation at its visitor's center in Shelby, Montana.

Curtis Shuck, center, founder of the Well Done Foundation, talks with elementary students in Montana about the process of plugging abandoned and orphaned wells. Some of the students will be returning to see the real thing happen for Earth Day, when the Foundation will plug its fifth well.

Students try their hand at plugging a miniature "well" with the Well Done Foundation at its visitor's center in Shelby, Montana.

As Earth Day approaches, the Well Done Foundation is getting ready to celebrate its one-year anniversary by plugging its fifth orphaned well.

The Bakken-born nonprofit by happy chance is now on the forefront of what’s becoming a national movement to plug orphaned and abandoned wells. The Biden administration is on board with the concept, and has a $16 billion carrot in its infrastructure deal for that purpose. North Dakota’s Republican Senator Kevin Cramer is also on board as well, with bipartisan legislation he and New Mexico’s Democratic Senator have aimed at the problem as well.

The Well Done Foundation was started by former Red River Oil manager Curtis Shuck, who came up with the idea one day while driving across Montana, and noticing the number of old, abandoned wells dotting the landscape. Shuck knew just how much methane and other greenhouse gases were coming out of such well sites. But what stunned him, once he did a little research on it, was the sheer size of the problem nationwide.

The Environmental Protection Agency has estimated there are 3.2 million abandoned wells in the United States, each of which are releasing something like 2,500 metric tons of methane, give or take. State regulators, meanwhile, have reported at least 56,000 orphaned wells, and up to 745,943 undocumented orphaned wells.

With bankruptcies ticking up as a result of the recent COVID-19 induced downturn, there will surely be even more abandoned wells to add to the list.

On Earth Day, Well Done will plug Anderson No. 1, it’s fifth Montana orphan, with an audience of school children from the Shelby Elementary School and the Sunburst Montana Elementary School.

While that may not seem like a lot of wells at first glance, it still represents about $1 million in private funds raised so far, and the equivalent of more than 250,000 metric tons of carbon dioxide from greenhouse gases like methane no longer pouring unchecked into the atmosphere.

It’s just a beginning, too. Next year, Shuck’s foundation is set to plug six times as many wells, and he has partnerships standing up in 11 states, including Pennsylvania, New York, West Virginia, Ohio, Kansas, Louisiana, and Texas.

Well Done is also among stakeholders providing feedback to the Biden administration on how best to structure the $16 billion President Joe Biden has proposed in his infrastructure bill to plug abandoned and orphaned wells. Even though Shuck has prided himself on not taking any taxpayer dollars to plug these abandoned wells, he recognizes the need for national efforst to address the sheer size and scope of the problem.

“There’s a lot of folks out there who are really you know advocating for this,” Shuck said. “There’s plenty of need out there, and $16 billion is a good start. It’s not gonna solve the whole problem, but we hope that it acts as an accelerator and encourages folks to get involved and do this.”

Well Done is also working on a carbon methodology with the American Carbon Registry, to quantify and communicate the benefits of each well plugged in terms of methane emissions and impact on climate.

“Ultimately we’re hopeful that will create a platform for us to be able to — and others as well, not just Well done — to be able to use it as a tool to financially underpin or underwrite the cost of some of this plugging,” Shuck said.

Well Done has opened a visitor’s center in Shelby recently, and will be opening locations in Pennsylvania and Louisiana as well. And they are also partnering with Montana Tech on research into cementing techniques for plugging wells.

“Not a bad first year right?” Shuck said with a chuckle.

Shuck’s Foundation might seem like “small potatoes” to some, but he has been having great success, which he attributes to the grass roots approach he takes with it.

“We are just sort of the facilitators,” Shuck said. “We use the local talent, the local service companies employing the local people. We’re not coming in and swooping into town like on our high horses. It’s all about really having that connection at the community level.”

Shuck also believes in a little something he calls “co-opetition.” That’s cooperative competition.

“There’s just so much work out there,” Shuck said. “With all of us working at this, you know, we can make a bigger difference.”

The sheer number of wells needing to be plugged yesterday is among reasons Shuck decided to go nonprofit. As a non-profit, Well Done can focus on the mission. It doesn’t have to worry about sharing proprietary information. More wells can get plugged more quickly.

“Our job is, again, to hopefully create a platform that others can participate in that will create benefit across this space,” Shuck said. “That’s why we’re sponsoring the methodology with the American Carbon Registry, and once that methodology is public, it will be available for others to use. It won’t just be proprietary to the Well Done Foundation.”

The effort is also creating jobs at a time when jobs are very much needed.

“Typically the orphan wells are not in the Bakken, and they’re not in the Permian,” he said. “They tend to be in these, you know, more distressed communities. They’re all in what are referred to as stripper fields.”

Stripper wells in general have marginal production, and the majors who may have drilled them are either long gone, or have sold them off to “mom and pop” oil.

“So now all of a sudden we come in with a program that allows us to help create jobs and generate economic vitality in some of these areas that are currently suffering from that,” Shuck said. “That’s a true win-win.”

The Well Done Foundation will give a site tour of its fifth plugged orphan oil well (Anderson #1) and host a reception at the WDF Visitor Center in Shelby to celebrate its one-year anniversary on Thursday, April 22, which is Earth Day.

The Well Done Foundation has received significant national media attention and has become one of Montana’s most high-profile conservation NGOs in its mission to identify and plug orphaned oil and gas wells and restore the adjacent surface area to its original state. There are some 200 orphaned oil/gas wells in Northern Montana, each of which, left open, emits as much methane as 1,500 cars in a year.

The Visitor Center Open House and Reception will take place at the WDF Visitors’ Center from 4 to 7 p.m., 333 Main Street Shelby, Montana 59474.