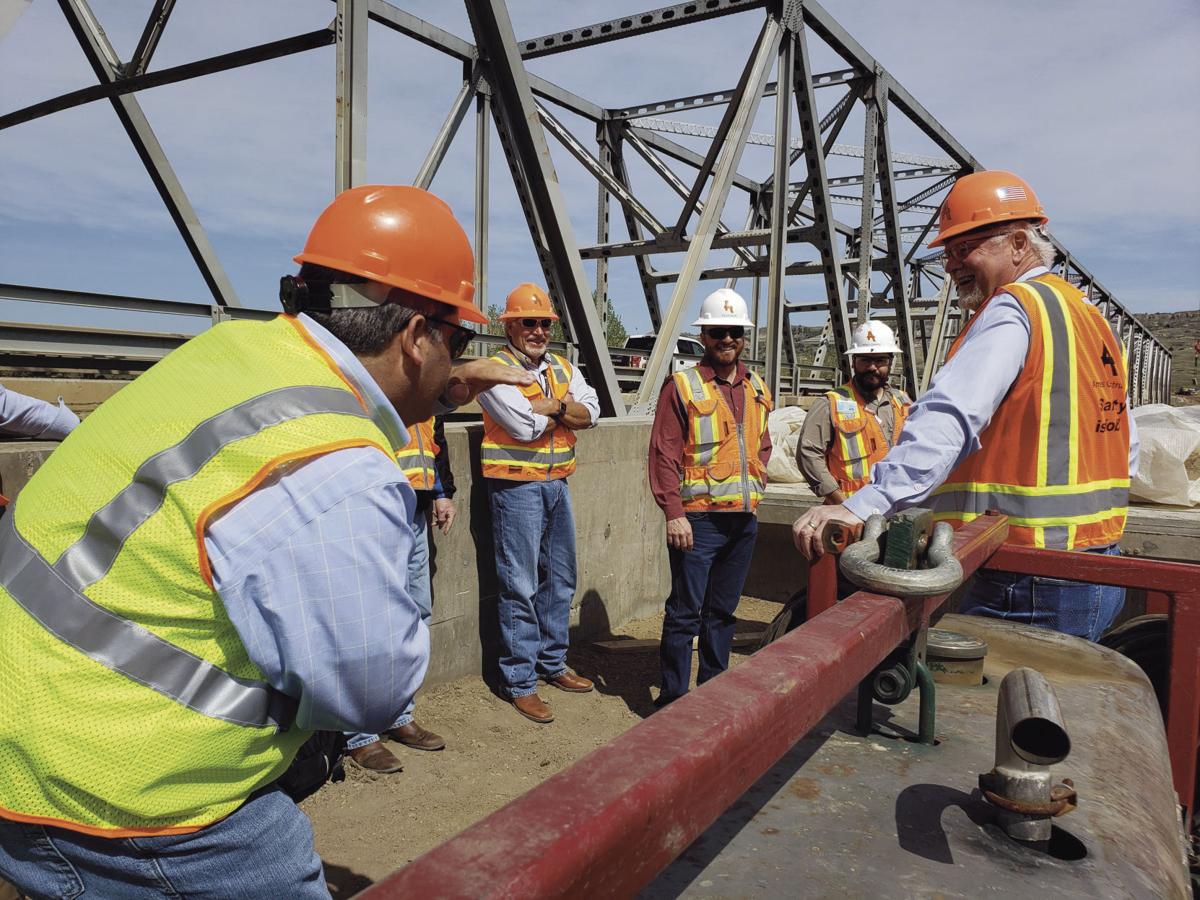 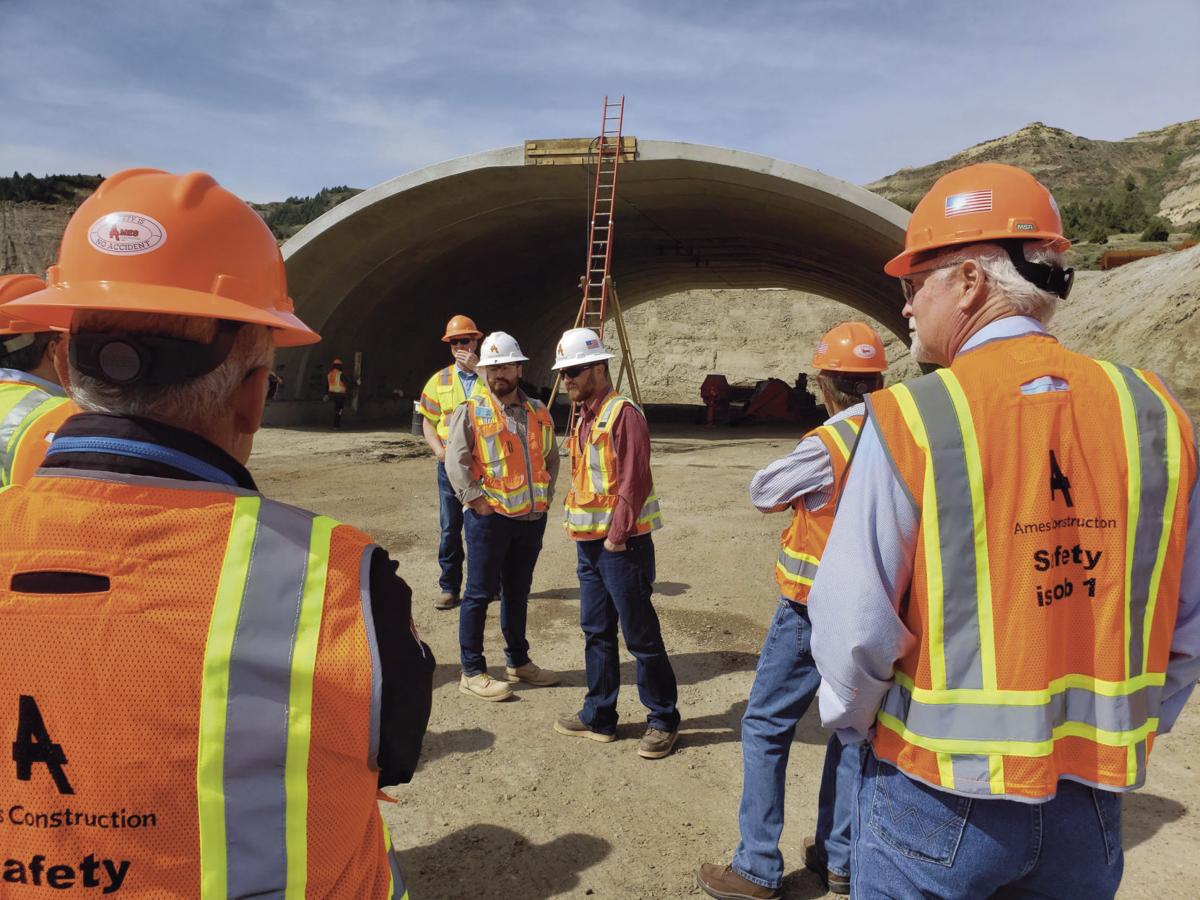 Sen. Dale Patton, right, listens to workers talk about installation of a wildlife underpass near the Long X bridge.

Sen. Dale Patton, right, listens to workers talk about installation of a wildlife underpass near the Long X bridge.

Fifteen concrete arches have been put in their places at the Long X bridge, part of a wildlife underpass that will help protect sheep and other wildlife in the area that might otherwise be compelled during their migration season to brave a highway frequented by overweight trucks.

Bill Panos, Director of the North Dakota Department of Transportation, told a group of lawmakers touring the site on Wednesday that the wildlife tunnel will cost about $3 million. The point of this expense is not solely to take care of wildlife, however. It is also safety for human beings.

“We’ll do more of these, I’m sure,” he said, indicating that federal programs are making more funds available for wildlife passages. Data is showing how well they work to protect both humans and wildlife from what is often a potentially fatal interaction for one or both parties.

The decision whether to go over or under is based on biological surveys that take into account the preferences of the animal in question, as well as the logistics at a particular site. The wildlife biologists will also watch the passage and tweak things to ensure everything is working as intended.

Work is now well underway for the 2020 construction season at the Long X bridge. The historic span is being replaced with a newer, wider structure. A portion of the old bridge will be salvaged by a Linton-area rancher, who has told media outlets he plans to install it over Beaver Creek on his land.

Three cranes are on site to lift large concrete structures and gently set them into place. Some of these concrete pieces are as high as a person, and appeared to be a football field or so in length.

The concrete arches that make up the wildlife tunnel are $80,000 per pair, and included 15 of them.

Panos said the state is advancing all $320 million or so of its highway projects in the state by about two months. Gov. Doug Burgum announced the initiative a few weeks ago. It’s part of an effort to provide job opportunities for the thousands laid off amid the COVID-19 pandemic.

The Long X bridge replacement is a $34 million project, and expected to be completed late this year. The project is part of a multi-phase project to improve the safety of Highway 85, which at times during the boom led the state in fatalities.

Steve Selwei, director of Transportation Programs for North Dakota Department of Transportation, told the Williston Herald the state is still trying to procure funding to convert Highway 85 to four lanes from Watford City to the Long X bridge.

They’ve put in another application for $45 million from INFRA, which is a federal grant program. That would be about one-half the cost of four-laning the 30-mile stretch.

“We are hoping they will announce something this spring,” Selwei said. “But it is strictly up to the U.S. DOT.”

This will be the third go for an INFRA grant for North Dakota. Last year, the state was again denied funding for a $40 million infrastructure grant from what was then an approximately $900 million pot of money.

Panos said he has talked about that with the DOT this year about the grant earlier this year.

“Matter of fact, they mentioned to me that North Dakota is one of only 13 states that hasn’t received one of those grants,” he said, indicating he believes the state has a good chance of getting funds this time.

The Long X portion of Highway 85 is used by 4,200 vehicles per day, according to state traffic counts.

Cal Klewin, executive director of the Theodore Roosevelt Expressway Association, has long been an advocate for four-laning Highway 85.

He has compiled figures showing that Highway 85 is carrying most of the state’s oversized and overweight permits.

“That pretty much tells what the need is to have this in a four-lane system,” he said. “We will continue to push forward and do whatever we can to complete the project. It is a high priority corridor on the national highway system and it is a very high priority in North Dakota as far as our transportation system.”