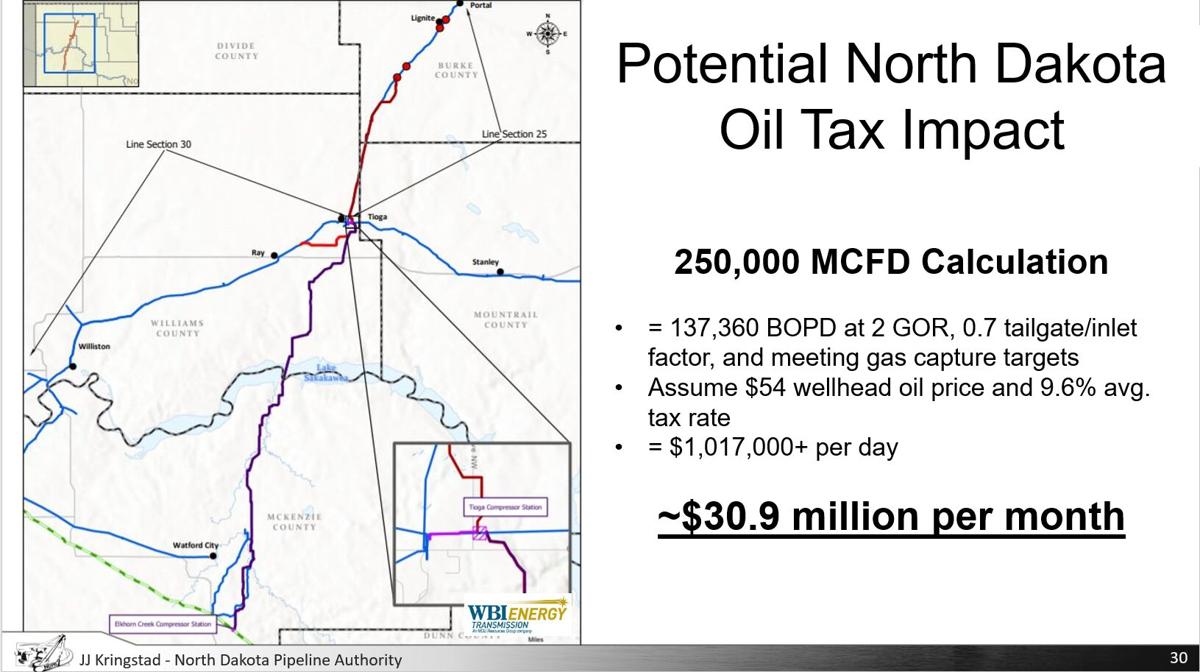 A new natural gas line that will transport up to 250 million cubic feet per day of natural gas and help reduce flaring in the Bakken is now a go.

The Federal Energy Regulatory Commission has issued a certificate of public convenience and necessity for the North Bakken Expansion project, submitted by MDU subsidiary WBI Energy last year in February.

According to WBI’s application with FERC, the North Bakken expansion project would connect WBI Energy’s Tioga Compressor Station to a proposed new Elkhorn Creek Compressor Station in McKenzie County with a 62-mile, 24-inch diameter pipeline, and from there build a .3-mile long new interconnect with the existing Northern Border Pipeline.

WBI had hoped to complete the expansion project by November of this year, but the line was one of 14 projects that appeared to stall in October of 2020 in the waning days of the Trump administration.

Subsequently, a new chairman came on board as part of the Biden administration, Chairman Richard Glick, who has implemented a new greenhouse gas review for projects like WBI’s.

North Dakota’s Congressional delegation, meanwhile, were among a group of 25 senators pressing FERC to act on stalled pipelines without applying Glick’s new guidance retroactively to projects filed before he came on board. The group was led by Sen. John Hoeven, R-N.D..

“FERC’s approval of the North Bakken Expansion Project is excellent news for North Dakota. This project will help Bakken producers improve their natural gas capture rate, which will reduce flaring and increase our supply of American energy,” U.S. Representative Kelly Armstrong, R-N.D., said. “Pipelines are essential infrastructure, and this approval is an integral part of maintaining American energy independence.”

“If a new gas transmission project was not developed, the region north of the lake would continue to see depressed activity levels, since the gas capture infrastructure is not available to meet the flaring guidelines,” he said.

According to Kringstad’s calculations, each day the system is operating at its starting capacity means $1 million per day in oil tax revenue for the state. That prompted the North Dakota Industrial Commission to also send letters to FERC urging a timely decision.

In its order, a majority of FERC’s Commissioners said that they disagreed that greenhouse gas emissions must necessarily be a consideration, incremental or not for the WBI project, and rejected calls by the Institute for Policy Integrity to monetize such impacts using a social cost metric.

Natural gas produced in the Williston Basin is a byproduct of oil extraction, FERC noted, which gets flared at the wellhead if there is insufficient infrastructure to take that gas to markets which will use the byproduct for other purposes — not all of which are necessarily combustion.

Nonetheless, FERC did look briefly at the total potential for greenhouse gas emissions in its order, in response to comments from the Institute for Policy Integrity. According to that analysis, the maximum potential GHG from the project would be 85,666 tons of carbon dioxide equivalent annually, FERC said. Downstream emissions, meanwhile, assuming 100 percent of the gas is combusted, would be 4.83 million metric tons per year of carbon dioxide equivalent.

To put that in context, FERC said that would increase CO2 emissions .000014 percent over 2019 levels in 2021. In subsequent years, that figure could potentially increase to .085 percent.

“The foregoing analysis of greenhouse gas emissions is offered for information purposes only,” FERC added. “(It) does not inform any part of this order’s holding and shall not serve as precedent for any future order.”

In their dissent, Glick and FERC Commissioner Allison Clements wrote that they believe the Commission was required by NEPA to prepare a supplemental EIS that would fully examine the greenhouse gas emissions caused by the project. The two cited the Standing Rock Sioux’s case against the U.S. Army Corps of Engineers permit for Dakota Access to support their reasoning.

“We note that an EIS is particularly appropriate here in light of WBI’s contention that the project will back down flaring associated with oil production from the Bakken and Three Forks Formations in the Williston Basin,” they wrote. “An EIS would allow the commission to assess the net effects that the project will have on GHG emissions.”

The two also noted that a finding that GHG emissions are significant wouldn’t necessarily mean the project dies.