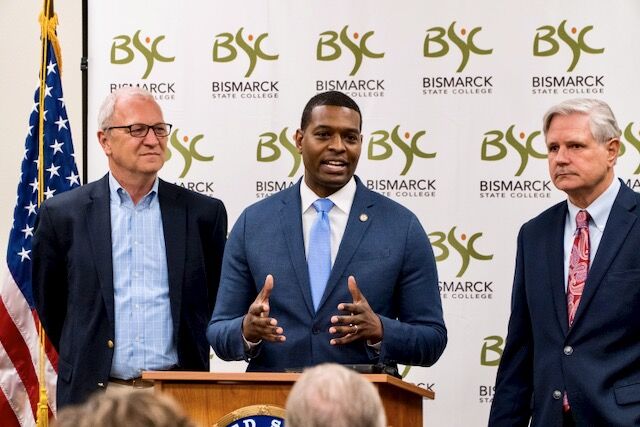 The Biden administration’s EPA administrator Michael Regan was in the state last week to talk with North Dakota officials about carbon capture, storage, and utilization for its fossil fuel and ethanol industries.

“As a former state regulator, Administrator Regan understands that a one-size-fits-all federal policy doesn’t work for our country,” Gov. Doug Burgum said. “North Dakota is an energy and agriculture powerhouse that feeds and fuels the nation and the world, and no one cares more about the quality of our air and water than the people who live here. With states leading the way, our nation should be trying to maximize agriculture and energy production, not minimize it, and the federal government can help us do that by investing in research dollars to innovate carbon management technologies.”

North Dakota has room for 250 billon tons of carbon dioxide, Burgum has said before — a “geologic jackpot” when it comes to a future low-carbon world. North Dakota is also the first state in the nation to receive approval from the EPA to regulate geologic storage of carbon dioxide.

The North Dakota legislature this year created a Clean Sustainable Energy Fund to support innovations in low-emission technologies that can build a long-term viable path forward for its all-of-the-above energy strategy.

A companion bill to Sen. Kevin Cramer’s REGROW ACT is making its way through the house, cosponsored bv North Dakota Republican Rep. Kelly Armstrong and Texas Democrat Lizzie Fletcher. The bill takes North Dakota’s Bakken Restart model and scales it up nationwide into a $4.7 billion program that will plug and reclaim orphaned oil and gas wells, while providing jobs to thousands of workers in an oil and gas industry that was hard-hit by the coronavirus pandemic.

“North Dakota has long been at the forefront of responsibly developing our oil and gas resources, and excels at reclaiming orphaned wells,” said Congressman Armstrong. “With more than fifty thousand abandoned oil and gas wells in the United States, cleaning them up is not only the right thing to do, but it will create and retain tens of thousands of jobs for workers in the oil and gas sector across the country. I am grateful to work with Congresswoman Fletcher in this bipartisan effort.”

Many groups are endorsing the idea, ranging from Ron Ness, with the North Dakota Petroleum Council, who touted the jobs aspect of the program, to state regulators like Lynn Helms, who said it would incentivize states to review regulations and seek solutions to prevent more orphan wells.

A group of 12 state governors including Gov. Doug Burgum have also endorsed the plan, and urged Congress to act promptly on the legislation.

“North Dakota’s energy producers are leaders in carbon capture, and the 45Q tax credit plays an important role in spurring this technology,” Congressman Armstrong said. “This bipartisan bill will help the country follow our lead, making utilizing carbon capture more accessible and ensuring that the US remains a leader in energy production and environmental stewardship.”

The bill would establish an $85 per metric ton credit for industrial and power generation facilities seeking to securely store captured CO2 in saline geologic formations,, and a $60 per metric ton credit level for storage in oil and gas fields and for beneficial utilization of captured carbon to manufacture low and zero-carbon fuels, chemicals and building products or other products of advanced value.

Another of Ryan’s bills seeks to offer ways to finance carbon technology capture. The Carbon Capture Improvement Act would allow state and local governments to open up tax-exempt bonds to pay for carbon capture projects. It would be a boost for direct air capture projects, too.

The Biden administration has suspended oil and gas leases in Alaska’s Arctic National Wildlife Refuge, and directed the Department of the Interior to determine whether the leases should be reaffirmed, voided, or subject to additional mitigation measures. The order affects nine 10-year leases on 430,000 acres.A previous order had directed Interior to review oil and gas activity in the Arctic Refuge. Interior said it found defects inn the underlying Record of Decision supporting the leases, including lack of analysis of a reasonable range of alternatives in the EIS conducted under NEPA.

The NEPA analysis is one in a string of reviews the Biden administration has implemented in the oil and gas energy space.

The cyberattack on Colonial Pipeline attack, followed by a similar attack on meat-producing giant JBS, has prompted the U.S. Justice Department to elevate ransomware attacks to the same priority level as terrorism. TSA, meanwhile, is now requiring pipeline operators to report cyberattacks to the Department of Homeland Security’s Cybersecurity and Infrastructure Security Agency within 12 hours. To this point, cooperation with cybersecurity officials has been largely voluntary.

Pipelines in The Bakken have been targeted by cyberattacks in the past, including the Dakota Access Pipeline.

Teacher Education Seminar — North Dakota Petroleum Foundation seminar for teachers to learn about the oil industry and bring new STEM ideas back to their classrooms. June 21. Visit https://ndpetroleumfoundation.org/programs/tes/ for details.