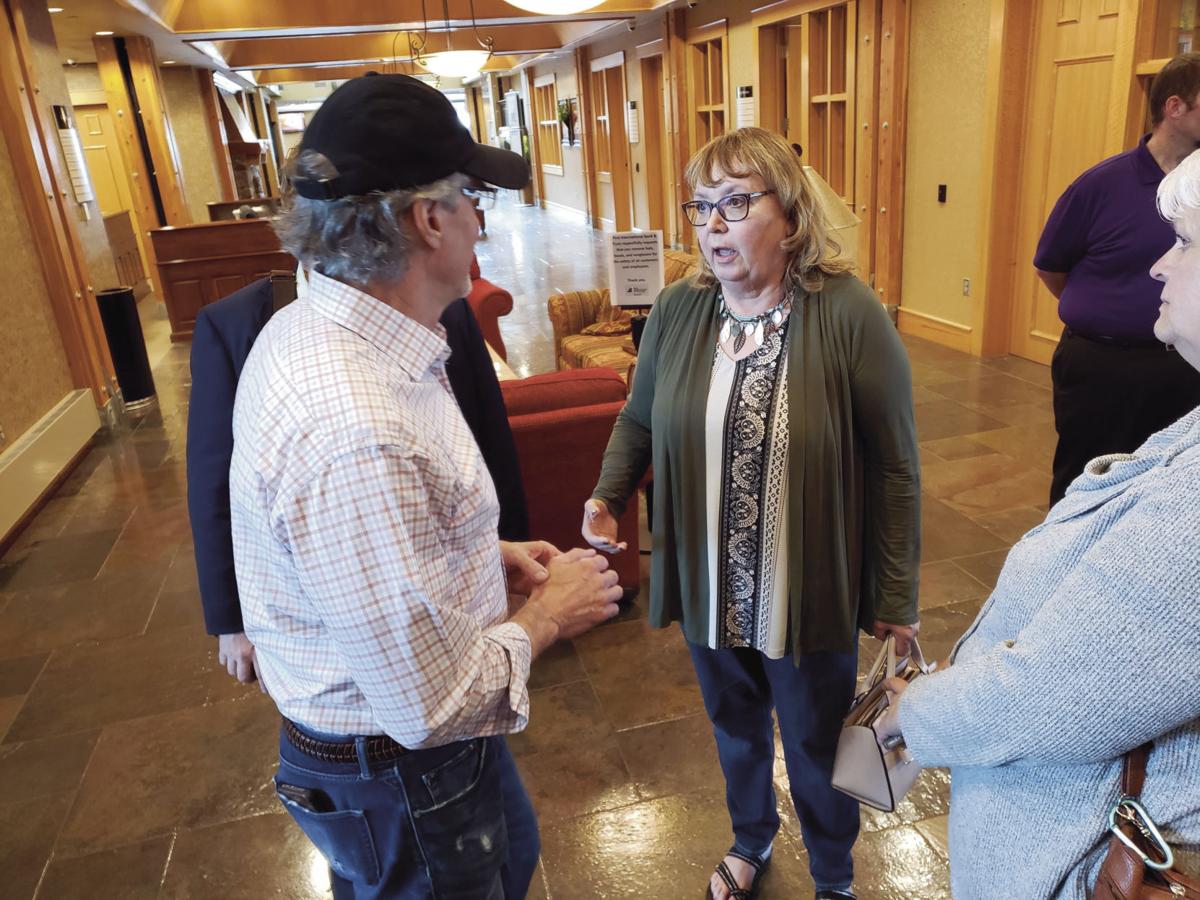 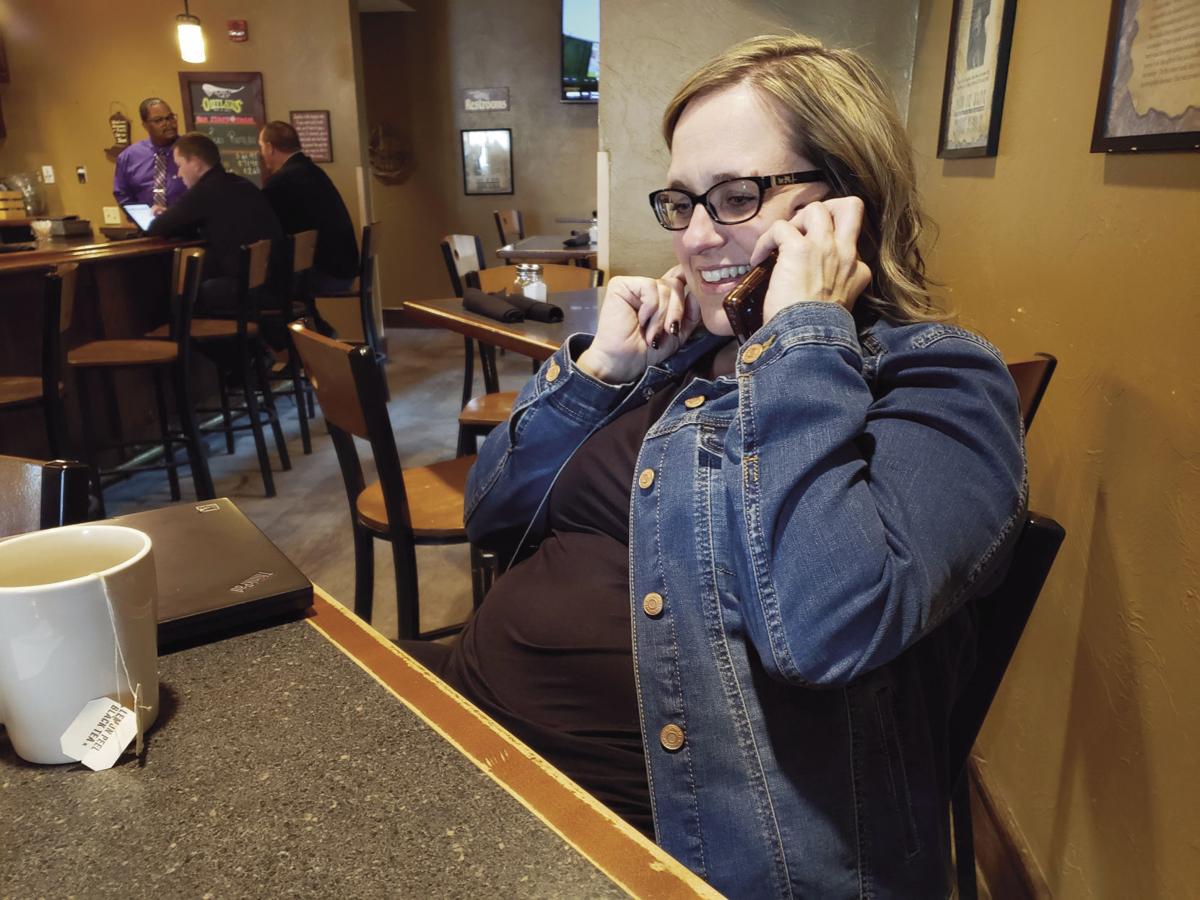 Jennifer Brown, California, was in Watford City Thursday to try and find housing. She wasn’t having much luck, but she did happen across discussion of affordable housing while Gov. Doug Burgum was in town. The topic hit home. 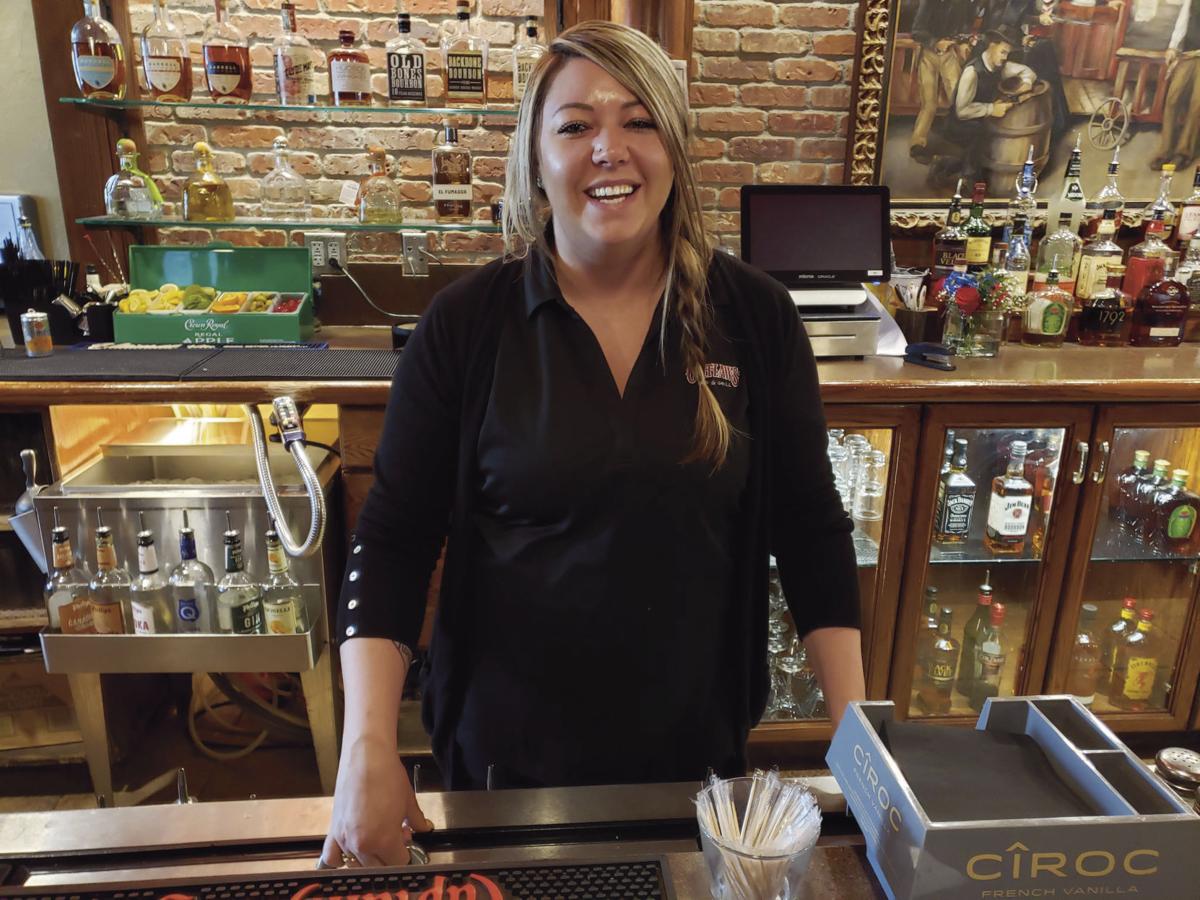 Lexi Jasmann, a bartender at Outlaws in Watford City, came to North Dakota on a “two-year plan.” Seven years later, she’s still here. A successful hunt for a house, however, was essential to her decision to stay.

Jennifer Brown, California, was in Watford City Thursday to try and find housing. She wasn’t having much luck, but she did happen across discussion of affordable housing while Gov. Doug Burgum was in town. The topic hit home.

Lexi Jasmann, a bartender at Outlaws in Watford City, came to North Dakota on a “two-year plan.” Seven years later, she’s still here. A successful hunt for a house, however, was essential to her decision to stay.

A labor crunch that has left 30,000-some positions open, many for high wages, and a big thorn in the side of hiring efforts in the Oil Patch — affordable housing.

“When we talk about Main Street, it’s not about the literal physical main street,” Burgum said. “It’s about workforce. We have 30,000 job openings and we cannot fill them if we don’t have places (those workers) want to live.”

Health care, parks, recreational opportunities, good schools — all that and more are on the list for today’s millennial workforce, Burgum said. Communities that don’t have those things, as well as affordable housing, are not likely to attract today’s workers.

The discussion just happened to catch the attention of Jennifer Brown of California, who listened in the background. Her husband has just taken a truck driving position in the Bakken.

“I’ve spent the last four weeks trying to find a place to live and we still don’t have anything,” she said. “I think the problem here is the ebbing and flowing resources. How do you dedicate resources to building when it might be a bust down the road?”

She said the company her husband is going to be working for does offer housing, but there is a healthy paycheck deduction. Too much to make it worthwhile.

She’s not looking for a house at this point, just an apartment or one-bedroom studio would do.

“This is a five to seven-year plan for us,” she said.

The couple hope to save the additional salary he will be making to buy a couple of trucks and start a trucking business.

She’s been frustrated, however, to the point of giving up.

“The apartment guides aren’t accurate,” she said. “I’ve spent 25 hours just waiting on returned calls and emailing. Not having one actual source of accurate information is defeating.”

The costs of housing, too, have been discouraging.

“It’s almost the same as in California,” she said. “It’s hard for families to come here, when you are trying to have a better life, but your cost of living might be the same or more, and you are giving up things like being close to the beach or the mountains and good weather, those kind of things.”

The other obstacle to filling the state’s labor crunch, Brown suggested, is the cost of flying into the area to look for a position.

She’s seen comments at online sites from others who want to come to the Bakken to seek employment, but they can’t afford that for an in-person appearance at a job fair.

“if you are trying to attract a more tenured employee, with experience, which a lot of them want, you have to make it make sense,” she said. “You have to make the housing and everything make sense.”

How 2 years become much more

While Brown is sure the couple’s stay will be limited, many of Watford City’s newest homeowners said much the same thing when they first came.

Among these is Lexi Jasmann, a bartender at Outlaws, which is housed in the same bank where Burgum was speaking.

Ultimately, she told her husband that if they were going to stay any longer, it was time to get out of the apartment they were staying in and buy a house.

A successful house hunt was key.

“My husband ended up getting a really good job,” she said. “They give him $2,000 a month for housing, which pretty much pays for our mortgage.”

Meanwhile, her son is eyeing a career in welding, and Jasmann sees that opportunities here are “endless” for that.

“Our stepson also really likes the school,” she added. “He transitioned from getting Ds and Fs to getting straight As the first two years that we were here. That helped a lot in our decision to stay.”

Jasmann added that she has enjoyed the community in Watford City, and found friends. That helped seal the deal.

“There’s lots to do here, especially if you like outdoor stuff,” she added. “We go to the lake. There’s hunting and fishing.”

Those are the kinds of stories that Pat Bertagnolli, with MBI Energy Services, says have helped him sell the Bakken to prospective employees.

He’s taken that a step further lately, outright asking for volunteers attending the high school, who say their experiences here have been great.

He has about 50 or so willing to help new students make a successful transition to living in Watford City and loving it.

Joel Brown, president of McKenzie County Job Development Authority, meanwhile, has been working on a pilot program, funded with $1 million from McKenzie County, to offset some of the costs of infrastructure for new houses.

The idea is to buy down some of the infrastructure costs so that new homes won’t exceed $315,000, the cap on FHA loans.

In the first round, Brown is hoping 20 to 30 houses can be built using the subsidy.

“We know we need a lot more than that,” he said. “But we are looking to jump start the development of more housing.”

Sanford, after the meeting, said programs like that, if successful, could help make the case at the state legislature for more funds for affordable housing.

“From a state standpoint, we looked at many different solutions,” he said, noting that there were efforts to put $40 million into the Housing Incentive Fund. Ultimately, the legislature approved just $7.5 million.

“It didn’t map for the legislature,” Sanford said. “They need a little bump. If we can show there is this much less oil production, this much less GPT for your budgeting process because we cannot fill the jobs, and that companies are reducing production and tax flow as a result, we can show that this will be an investment that is needed.”

Pilot may not be going deep enough

Karen George, a realtor at Horizons Realty, shows many arriving workers apartments and homes in the Bakken.

“I tell everyone that Watford City is the best small town in America, without a doubt,” she said.

But at the end of the day, for families considering jobs in North Dakota, it’s all about the bottom line.

“To get that guy here with his family, to buy into what we are trying to sell, we have to give him a place to put his family that is not going to cost his entire paycheck from that great job just to keep a roof over head,” she said.

She held up a cell phone with a list of pre-approved buyers, along with the price point they are seeking.

All of them are below that $315,000 mark for an FHA loan, which is what McKenzie County is targeting with its pilot.

“I don’t know if it is beyond the city, I don’t know if it’s something you can help us with,” George said to Burgum. “There are a lot of people who can afford a $450,000 home, don’t get me wrong, but there are a lot who can’t and who love this town. And we have to figure out what it is going to take to get it here for them.”

The “shiny” Rough Rider Center, the great jobs, and the one-of-a-kind recreational opportunities at the Maah Daah Hey trail, which are being developed by people like Nick Ybarra, are great, George said.

“But if we don’t have them a home they can go to that they can afford, they are not going to stay,” she said.

Affordability might also just be one facet of the problem, suggested Matt Schults, a father of three and a financial advisor in the area.

“We have enough to anchor people as a community, but it’s not just not having decent-priced homes,” he said. “It’s not just funding the bills either or subsidies to get it below $315,000. It’s finding contractors. So what do we need to do to make it so it’s attractive for the builders to stay here and make this their home as well?”