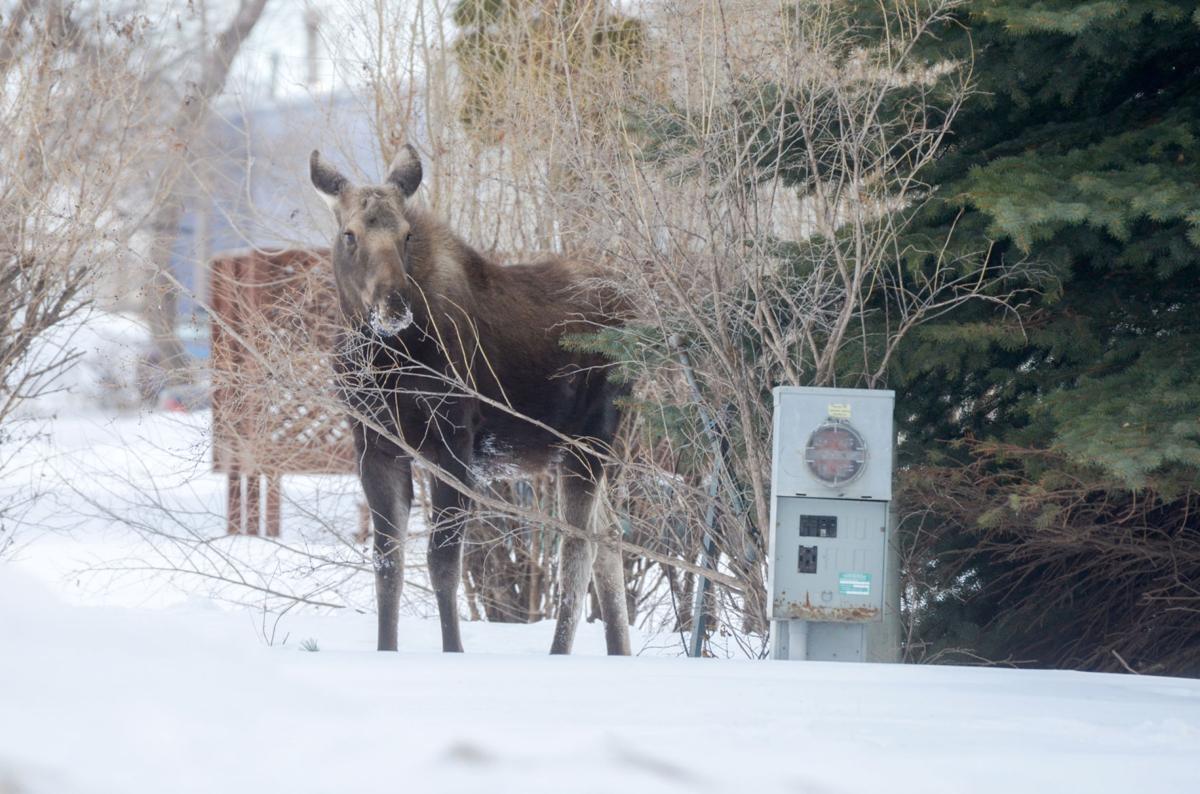 A moose calf in a yard in a backyard on Sixth Avenue West in Williston in late January. Moose have become more common in populated areas, leading the state’s Game and Fish Department to suggest increasing the number of hunting licenses available in an effort to curb the population. 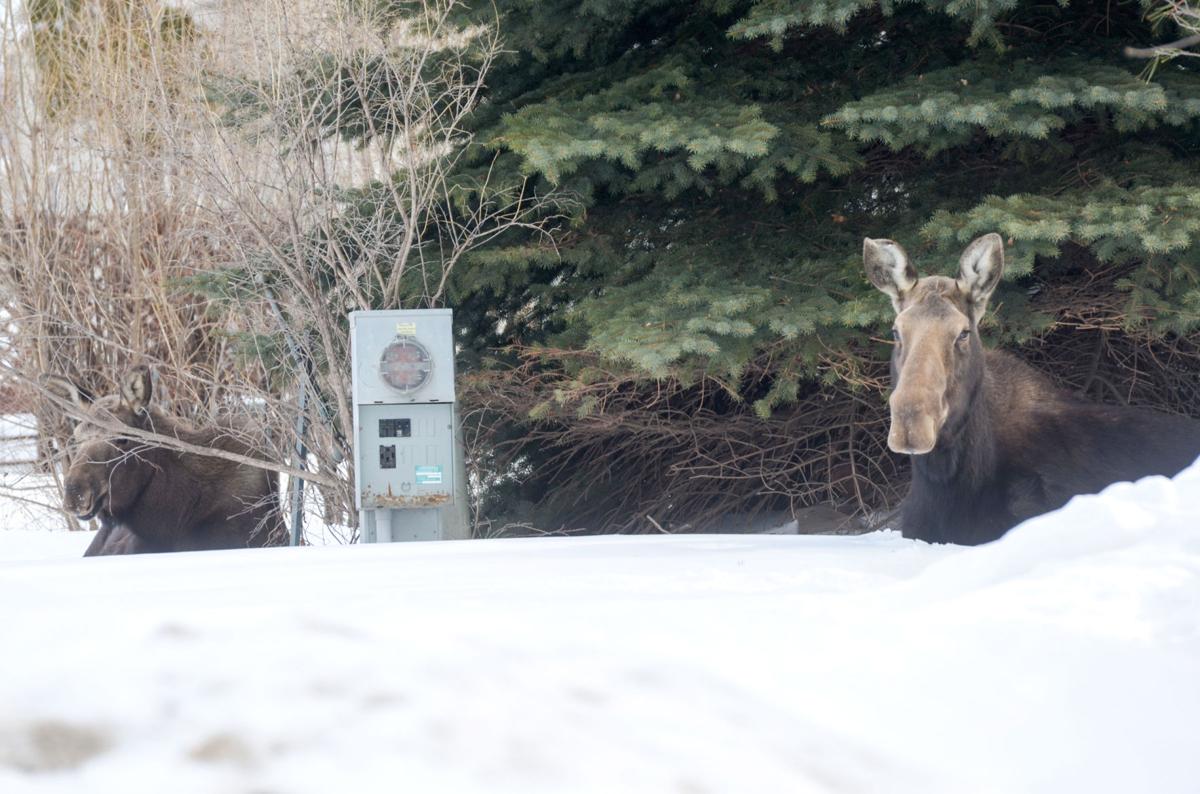 A moose calf and its mother rest in a snowy backyard in Williston in late January. 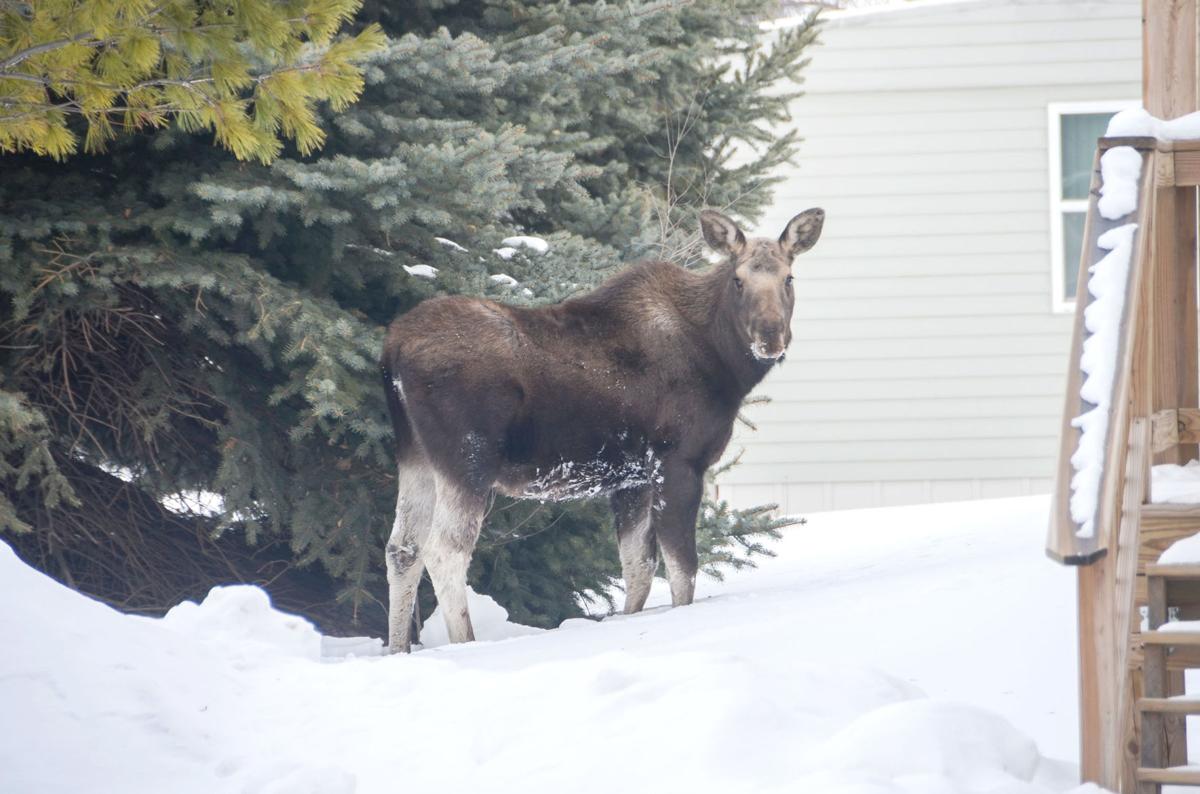 A moose calf in Williston in late January.

A moose calf in a yard in a backyard on Sixth Avenue West in Williston in late January. Moose have become more common in populated areas, leading the state’s Game and Fish Department to suggest increasing the number of hunting licenses available in an effort to curb the population.

A moose calf and its mother rest in a snowy backyard in Williston in late January.

A moose calf in Williston in late January.

Moose numbers are dwindling in forested lake regions but are now thriving in a nontraditional habitat — northwest North Dakota.

Moose populations are on the rise, according to recent aerial surveys, and their frequent ventures into city limits has prompted the North Dakota Game and Fish Department to propose modest increases to big game licenses to regulate moose numbers — even splitting a large unit to direct hunting in congested areas near Williams county.

“This is something very new to us,” Kent Luttschwager, wildlife resource section leader for Williston said. “Moose management is difficult because they are a fairly new phenomenon on this landscape. What’s really bizarre is moose numbers continue to decline in their strongholds of northeast North Dakota, Minnesota and Wisconsin.”

“Mild winters are not good for this,” Luttschwager said. “ It’s a challenge for us because they blend into their surroundings. We look for a minimum of 12 inches of snow. We need a consistent white base for the survey.”

Their 2017 surveys were completed and verified 86 percent increases in some areas, as well as shifting populations.

“We’ve also seen (the) number of moose west of Highway 85 increase from nine to 43,” Luttschwager said. “They’ve moved across the highway and there has been some shifting.”

Lack of predators and illnesses are the lead assumptions as to why moose are now thriving, though biologists cannot say yet with certainty, Luttschwager said.

Without any means to regulate the population other than hunting, Game and Fish has proposed 247 moose licenses for the 2017 hunting season, an increase from the 200 licenses in 2016. The large hunting unit referred to as M10 was split into a new unit, M11 near Lake Sakakawea.

The tags for “the big three” as the department puts it — moose, elk and bighorn sheep — are once in a lifetime tags and the deadline to apply is March 22.

Neighboring regions have noted significant concerns of diminishing moose populations and in some areas, have halted big game hunting seasons. With the time that buys, wildlife biologists are hopeful they can determine the cause, according to Luttschwager.

Moose are a state-protected species in Wisconsin and in 2016, Department of Natural Resources moose researchers used radio-collars to determine the loss in Minnesota. They found a smaller percentage was killed from predation and the largest contributor was brain worms, ticks and bacterial infections, Luttschwager said.

While northwest North Dakota is seeing a population boom, Luttschwager said it wouldn’t be beneficial to move surplus individuals to suffering regions. And without large predators to reduce the population naturally, moose have been encroaching on areas where people live.

“Moose mortality here is divided into vehicle collisions and hunter success,” he said. “We live in a state that doesn’t have any large carnivores like grizzly bears or wolves.”

As a result, calls to law enforcement and the local Game and Fish office have reflected the constant moose sightings throughout the winter.

“They’re browsers and they like to nibble on tree tips,” Luttschwager said. “Our biggest concern is how to act around moose. They are not overly aggressive but at times get aggressive.”

He stressed the importance of giving them their space and referenced the Alaska Department Fish and Game website for applicable decorum when coexisting with large animals. Many calls have been in regards to their appearance or their mien of hunger.

“What we don’t want to see is people getting too close or thinking they’re starving,” Luttschwager said. “They don’t herd like cattle and could move into a defensive posture. It’s best to leave them alone and hope they head outside of town on their own.”

Most phone calls the local Game and Fish office has received has regarded tranquilizing the animals and manually transferring the moose outside of town.

“It’s fairly problematic to determine the drugs for that large of an animal,” he said. “It’s not like the movies where they drop right away. It would be a moment before the tranquilizer would take effect and in the meantime, you could have a potentially angry animal charging through backyards where children play.”

His biggest concern with tranquilizers if they miss their shot.

“If there is a dart we couldn’t recover laying in somebody’s backyard that’s strong enough to sedate a 1,000 pound animal, what if somebody steps on it?” Luttschwager asked.

Moose may continue to be regular visitors until the population is brought to a manageable number and the Game and Fish could not stress enough to enjoy their presence but to leave them be, he said.