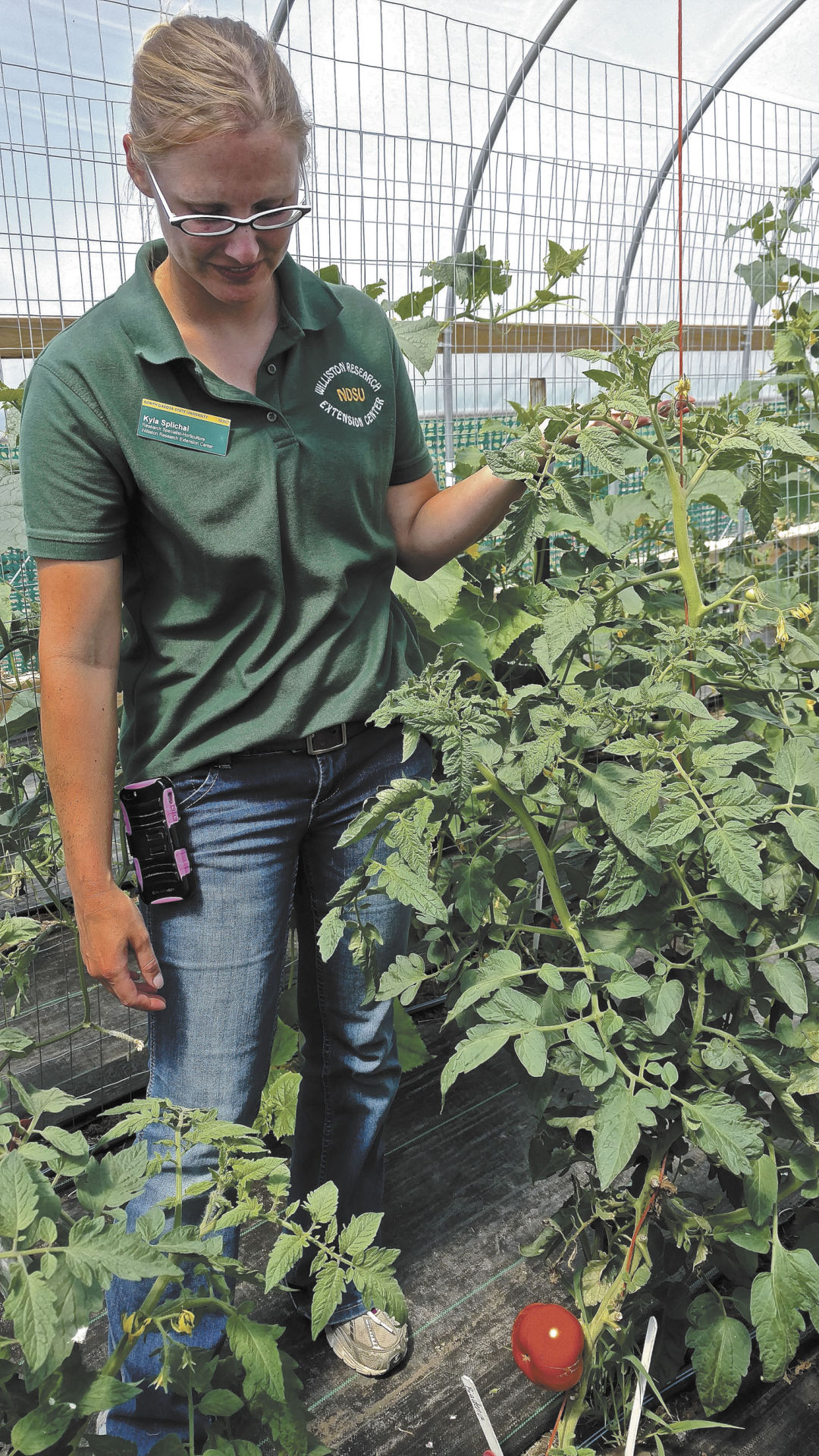 Kyla Splichal checks on tomato plants in the high tunnels at Nesson Valley. 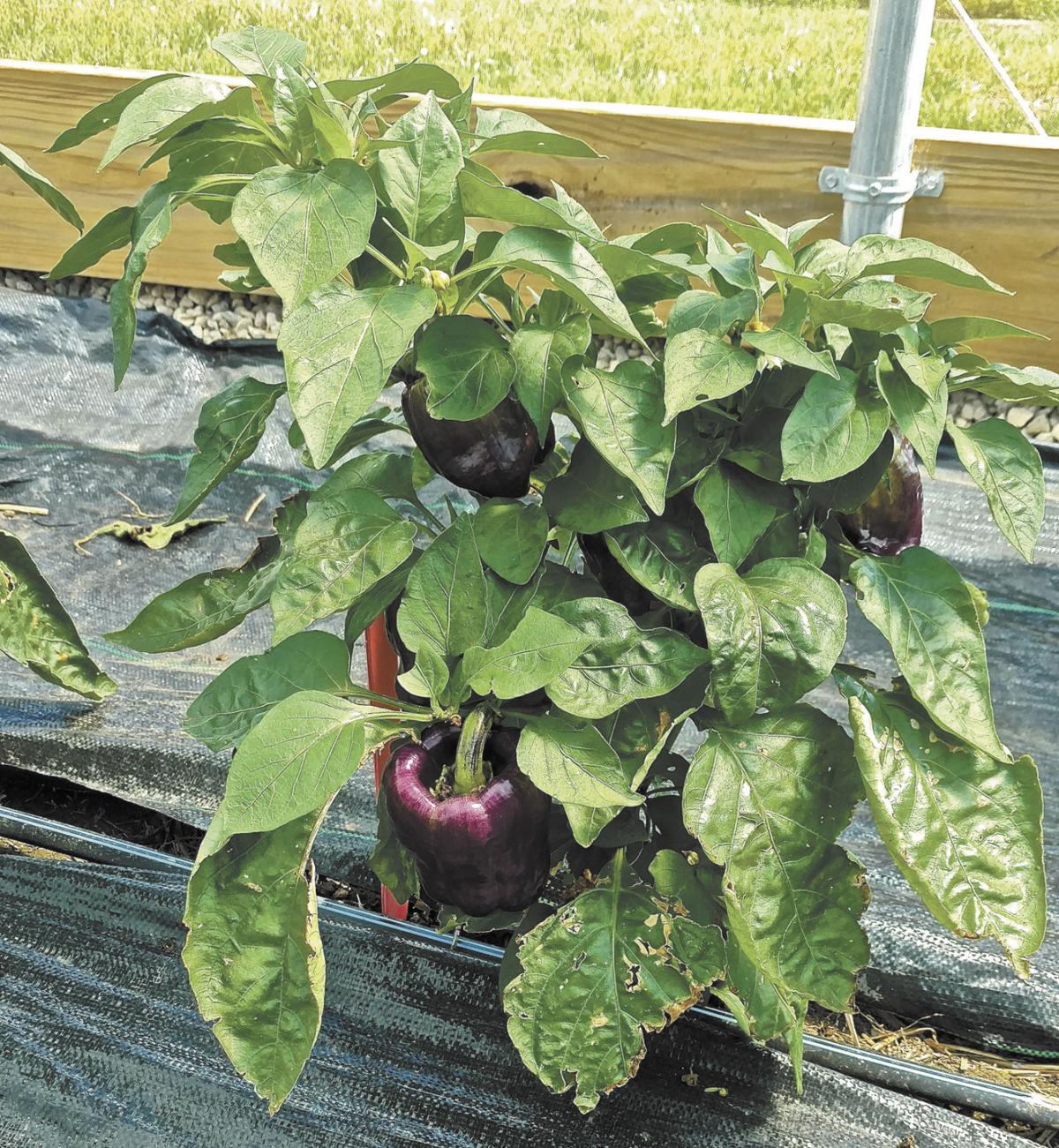 In addition to season extension, hoop houses can result in both better quality and more quantity of produce from plants.

Kyla Splichal checks on tomato plants in the high tunnels at Nesson Valley.

In addition to season extension, hoop houses can result in both better quality and more quantity of produce from plants.

Flowers, tomatoes and peppers are still going strong in the high tunnels at Nesson Valley, and hopes are high that this happy situation will continue through October and maybe even into November.

Nesson Valley is one of three test sites across the state exploring just how much season extension is possible in a high tunnel or hoop house. The other two locations are in Bottineau at the Dakota College and in Absaraka at the Dale E. Herman Research Arboretum, where a new tunnel was just built this spring. The $173,000 grant for the three test sites came from the North Dakota specialty crop block grant program.

Hoop houses, unlike a greenhouse, are generally inexpensive, but unheated spaces. Heavy plastic, sometimes double-walled with an air space in between, is stretched over metal or wood frames anchored in the ground with cement. The plastic with its air space in between traps heat from sunlight when it is cold, extending the season in the spring and fall. However, in summer, temperatures can get about 10 degrees or so too warm, so there must be a means for venting to keep production optimal. In the Williston tunnel, that is accomplished with roll-up sides.

The Williston tunnel has already successfully extended the season for vegetables considerably longer than the neighboring, open-air side plot, according to Kyla Splichal, horticulture research specialist overseeing the project for the Williston Research Extension Center.

“The frost we had two weeks ago really stopped all outside vegetable production,” she said. “Although the cut flowers outside still seem to be producing.”

While the peppers, flowers and tomatoes are still growing strong, the cucumbers in the hoop house have unfortunately slowed down — not due to weather, however.

“We’ve had some disease issues,” Splichal said. “That has affected production, although I think cucumbers kind of tire out after a while anyway.”

The high tunnel looks not only at how well season extension does in North Dakota but which varieties will work best. Production economics will also be evaluated, to see if cut flowers or other specialty crops can be grown profitably in them.

Williston’s structure is 20 by 96 feet and located at Nesson Valley, where irrigation is available. Tyler Tjelde, director of Nesson Valley Research Farm, has been instrumental in the upkeep of the structure, which he says can withstand 60-mph wind and up to golfball-sized hail. The double-walled structure has already successfully weathered a few storms, Tjelde said during this year’s Field Day at Nesson Valley.

Jacob Kluza has been in charge of the cut flower part of the operation, which includes delphiniums, snap dragons, and Lisianthas, a blue and beautiful forest flower rose that is advertised as able to beat the heat. He spoke about the cut flower project at the Nesson Valley Field Day this year.

“North Dakota is a little behind the farmers market,” Kluza said. “I come from Wisconsin, where every farmers market already has cut flowers.”

He’s hoping to change that with his cut flowers, which he believes could prove a valuable niche crop for someone in the area to grow, pointing out enthusiastically, “Who doesn’t love flowers?”

Such an operation would at the least be geographically advantaged, giving them an edge on at least transportation costs. But the tunnels have been shown in other states to improve overall quality and quantities in production operations, suggesting there may be other advantages as well.

Jacobs believes the tunnel will allow them to overwinter perennials that would normally be too tender for North Dakota. The houses are also protecting the crop from wind and weather damage, and can help create a more steady state for environmental humidity and temperatures, all of which could help contribute to the margins for a profitable specialty crop.

“If we can produce here on site, the cost is reduced,” Kluza said. “The impact on earth is reduced. It’s all around better to produce here and sell locally, and this is a great alternative crop to the normal agronomy.”