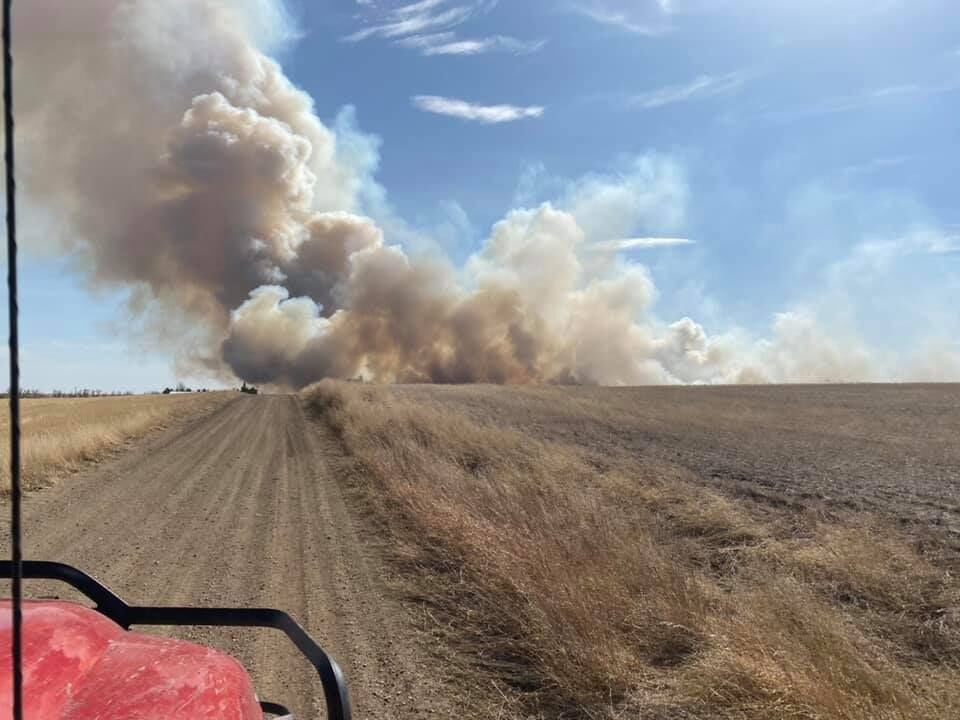 The view out of a Williston Rural firefighter's truck Saturday afternoon. 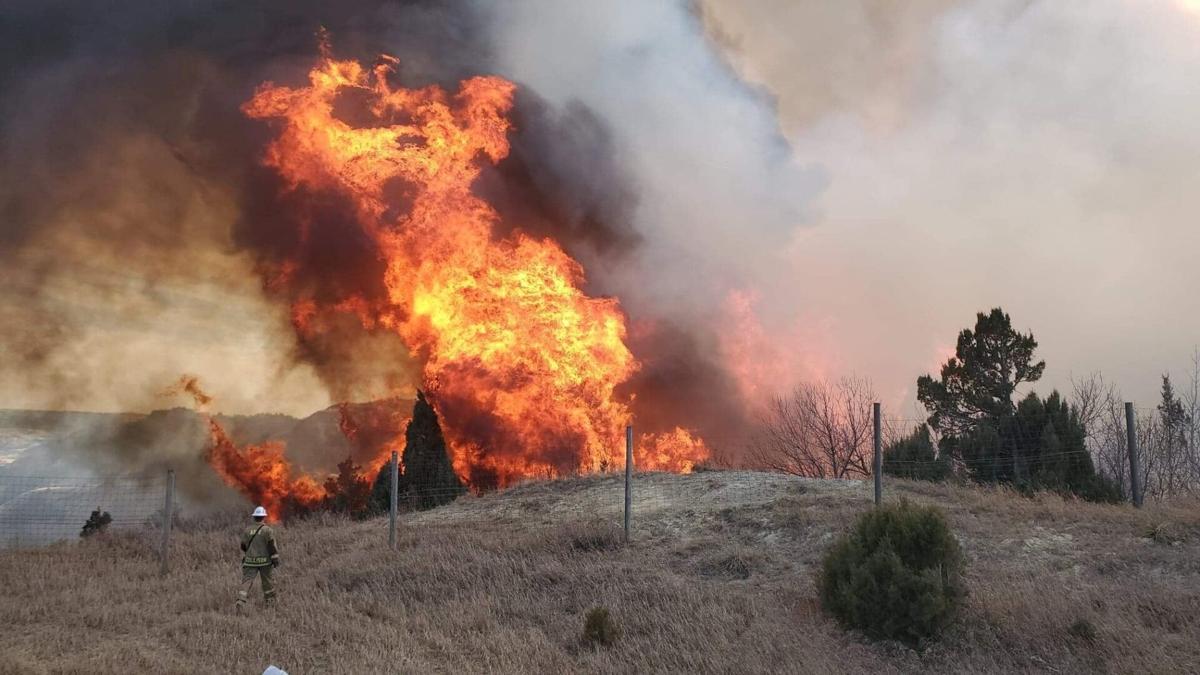 A pillar of fire reaches for the sky as a firefighter looks on at TRP. 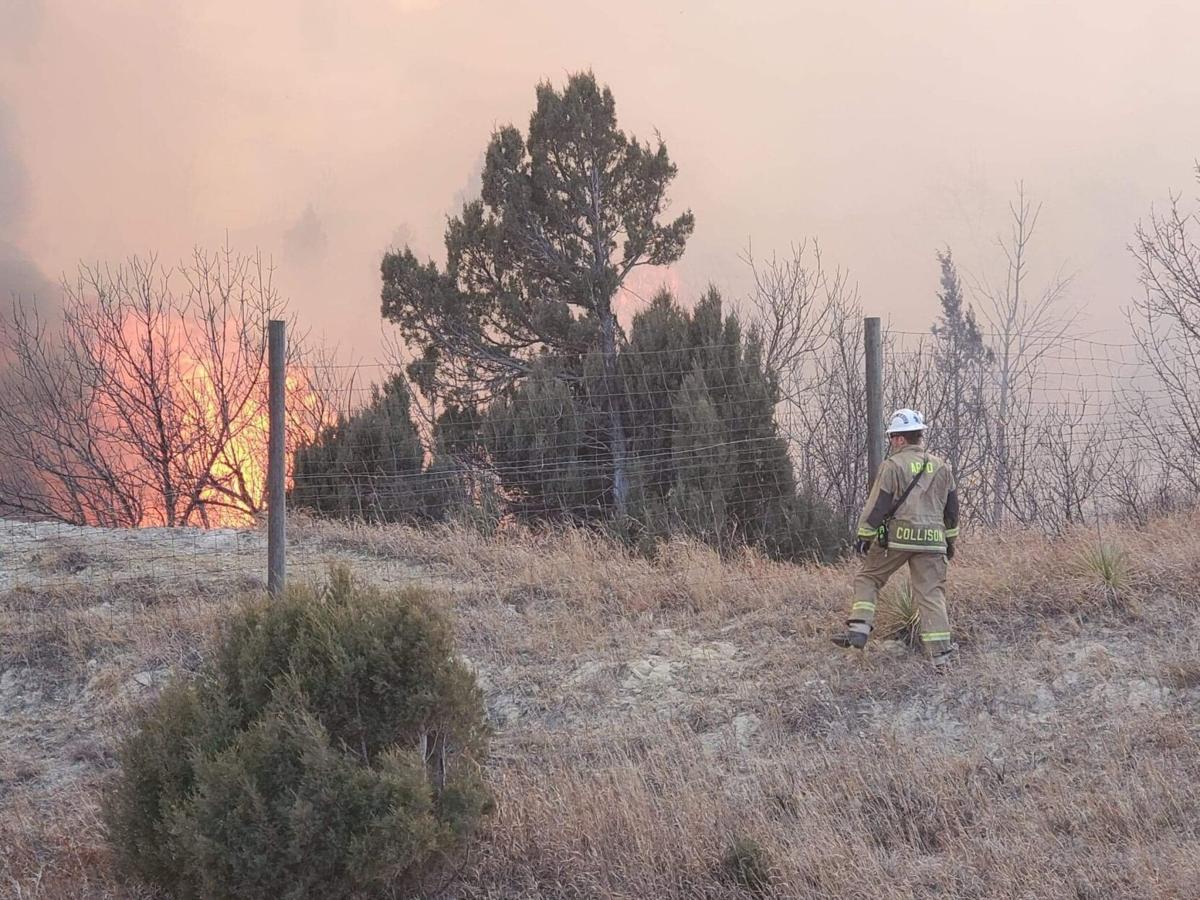 A firefighter stands at a safe distance from a wildfire in TRP's north unit. 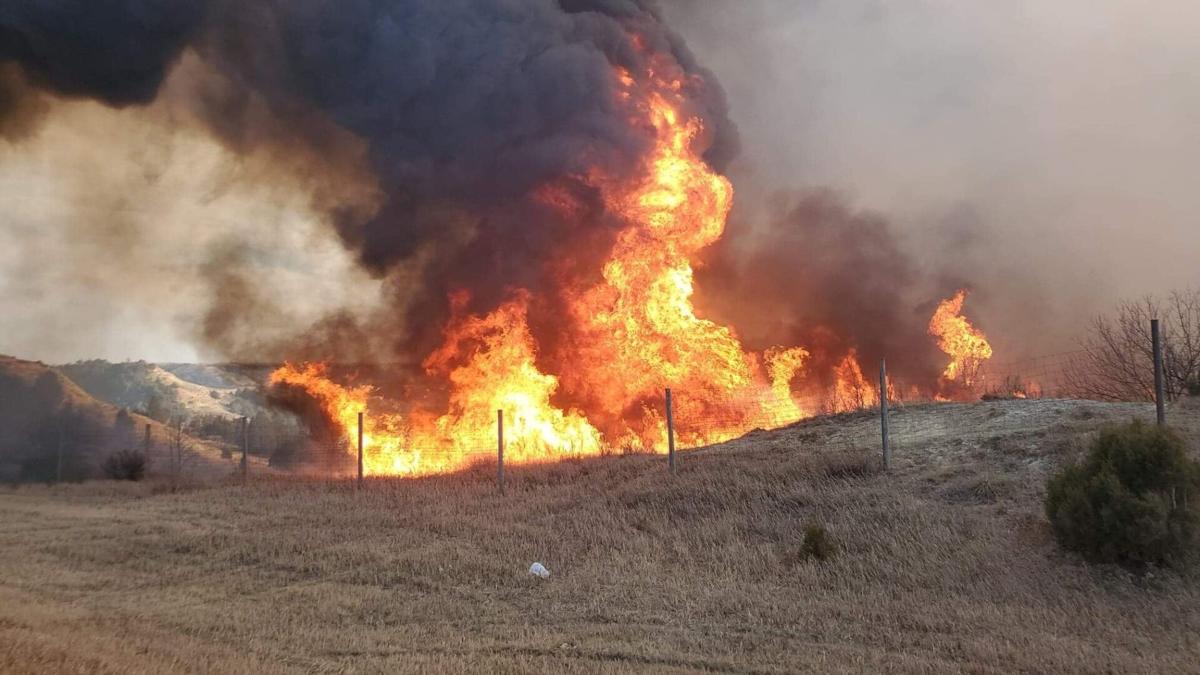 Wind is pushing wildfires at a faster than usual pace.

The view out of a Williston Rural firefighter's truck Saturday afternoon.

A pillar of fire reaches for the sky as a firefighter looks on at TRP.

A firefighter stands at a safe distance from a wildfire in TRP's north unit.

Wind is pushing wildfires at a faster than usual pace.

Wildfires kept area firefighters busy throughout the region over the weekend, with a fire north of Williston that consumed more than 2,000 acres and another fire in the north unit of Theodore Roosevelt National Park that did likewise.

The wildfires moved faster than usual and were bigger than any firefighters could recall from recent memory. The one north of Williston consumed a brush fire truck — firefighters got out just in time — but the truck is a total loss.

Chief of Operations for Williston Fire Department Matthew Clark told the Williston Herald the truck will be replaced as soon as possible.

“Needless to say, we need all the brush apparatus that we currently have due to the conditions in the area,” he said. “So we’re kind of venturing out there trying to figure out some options to replace that unit.”

The burn ban in the county is something everyone needs to take seriously, he added.

“There is no open burning, no fires, no campfires or anything like that for the county itself,” he said. “If they do see any fires or anything, report those fires in so we can get them taken care of before they get out of hand.”

The fire north of Williston appears to have been accidental, Williston Rural Fire John Laqua told the Williston Herald.

“We’re about 90 percent sure it was started by a bird that got electrocuted on a transformer box and fell to the base of the pole.”

Due to dry conditions, however, the fire that resulted spread much faster than usual.

“The fire was exhibiting extreme behavior, due to strong wind and extreme drought conditions,” Laqua said. “Fire breaks were helping but not stopping it like we’d typically see.”

Five homes were potentially at risk during the fire. Containment measures were immediately taken to keep the fire away from them, and none were lost, Laqua said.

No civilians were injured during the fire, and no vehicles other than the brush fire truck were lost. Three or four firefighters did suffer minor injuries during the battle.

“We’re asking people to be careful what they’re doing,” Laqua said. “Follow all the burn bans in place. Check the fire index rating each day. Avoid off-road travel if not necessary.”

Laqua said his department was paged out to the scene at 2:25 p.m. April 3, and did not reach containment until 8:30 p.m. that night.

Laqua said he has volunteers who are monitoring the grass fire area, and will do so for about a week, to ensure no hotspots or embers can start things back up again.

The wildfire in the Horse Pasture of the North Unit of Theodore Roosevelt Park continues to expand. The fire is estimated at 30 percent containment, with 3,000 acres burned so far.

Rough, inaccessible terrain and high wind have made the blaze difficult to corral, but firefighters from Montana, South Dakota, USDA Forest Service, North Dakota Forest Service, local farmers and other local fire departments are working around the clock to get the wildfire under control.

No structures have been damaged so far, but the North Unit housing facilities, CCC campground, and other infrastructure remain at risk, and the North Unit continues to be closed at this time.

Arnegard Fire Chief Rick Schreiber and his wife Michelle, were among those helping in Theodore Roosevelt Park. He and his wife were both in Wyoming for the Easter break, trying to celebrate both the holiday and their mother’s birthday.

They made the decision to return ahead of schedule, however, as the blaze in Theodore Roosevelt National Park expanded, and were among volunteers responding to the scene of that fire.

The cause of that fire is under investigation. It appears it may have started from a single spark, from a gunshot by people who were out target practicing.

“It is incredibly, incredibly dry,” Schreiber said. “It is no joke out there.”

Variable wind and the dry conditions have kept the fire moving incredibly fast, and enhance the danger of breakout fires. Schreiber said he clocked a fire at 25 miles per hour at points on Sunday, and he could feel the intense heat through the windshield from several feet away.

On that fire, aerial assets are dropping a red “slurry,” a fire retardant dropped ahead of the fire’s path of travel.

“Essentially this stuff, it saturates the ground and the weeds and the trees and the brush,” he explained. “when the fire gets to it it can’t continue to burn.”

Many of the fires in TRP are in deep ravines that are inaccessible.

Karolin Jappe, McKenzie County Emergency Manager, said many fire departments have been on scene, including volunteers from Sidney and Fairview, as well as Alexander, Grassy Butte and Watford City.

“We’re just hoping the winds calm down down,” she said. “the wind is just nasty. That is the worst part of the whole day.”

Jappe has been coordinating donations to the scene. She can be reached at 701-580-6936 if you would like to arrange a donation.