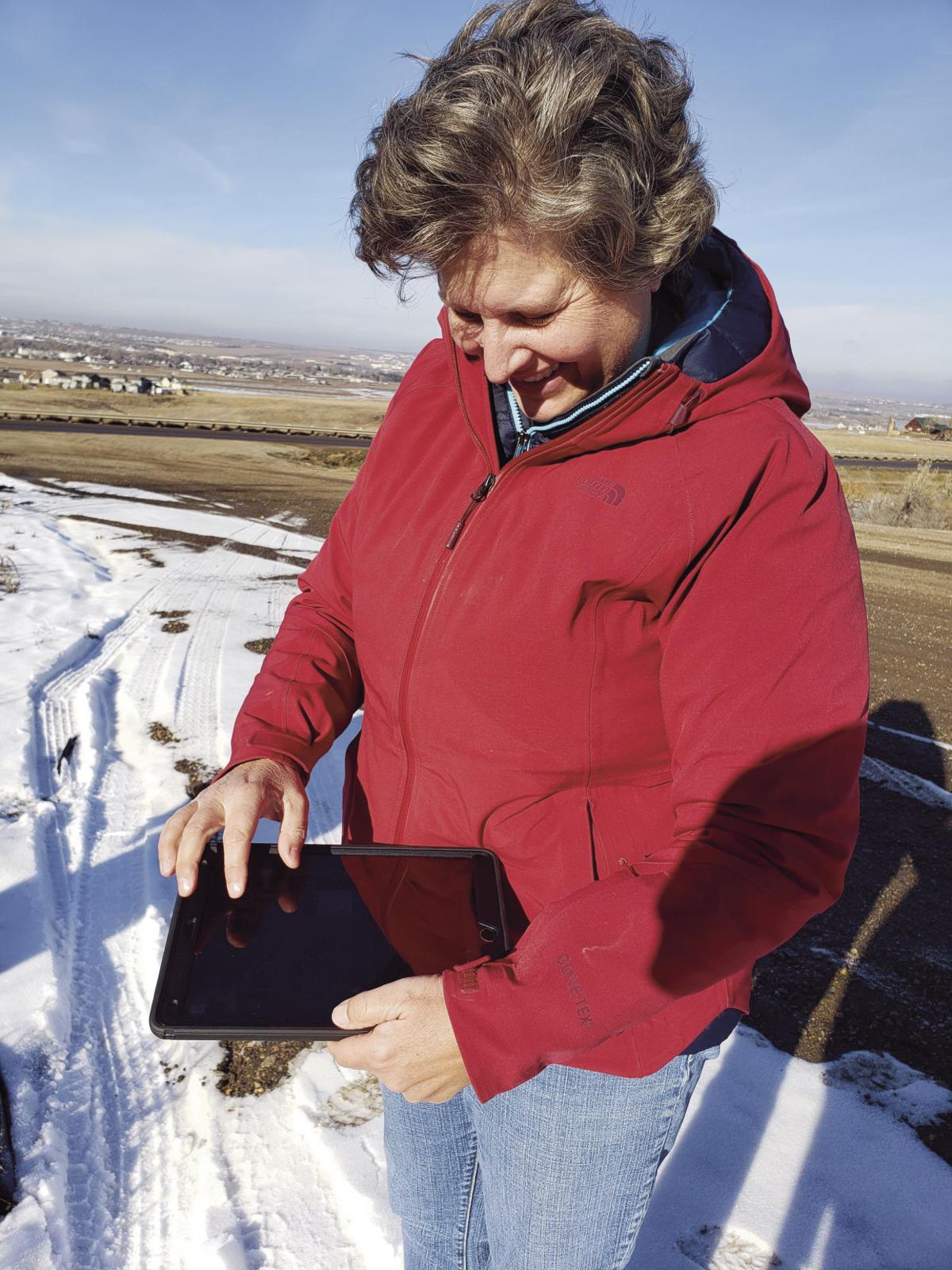 Joan Breiner uses an iPad to look at maps of exploratory drilling sites to find potential sinkholes at the Shift Services business along County Road 9 in Williston. 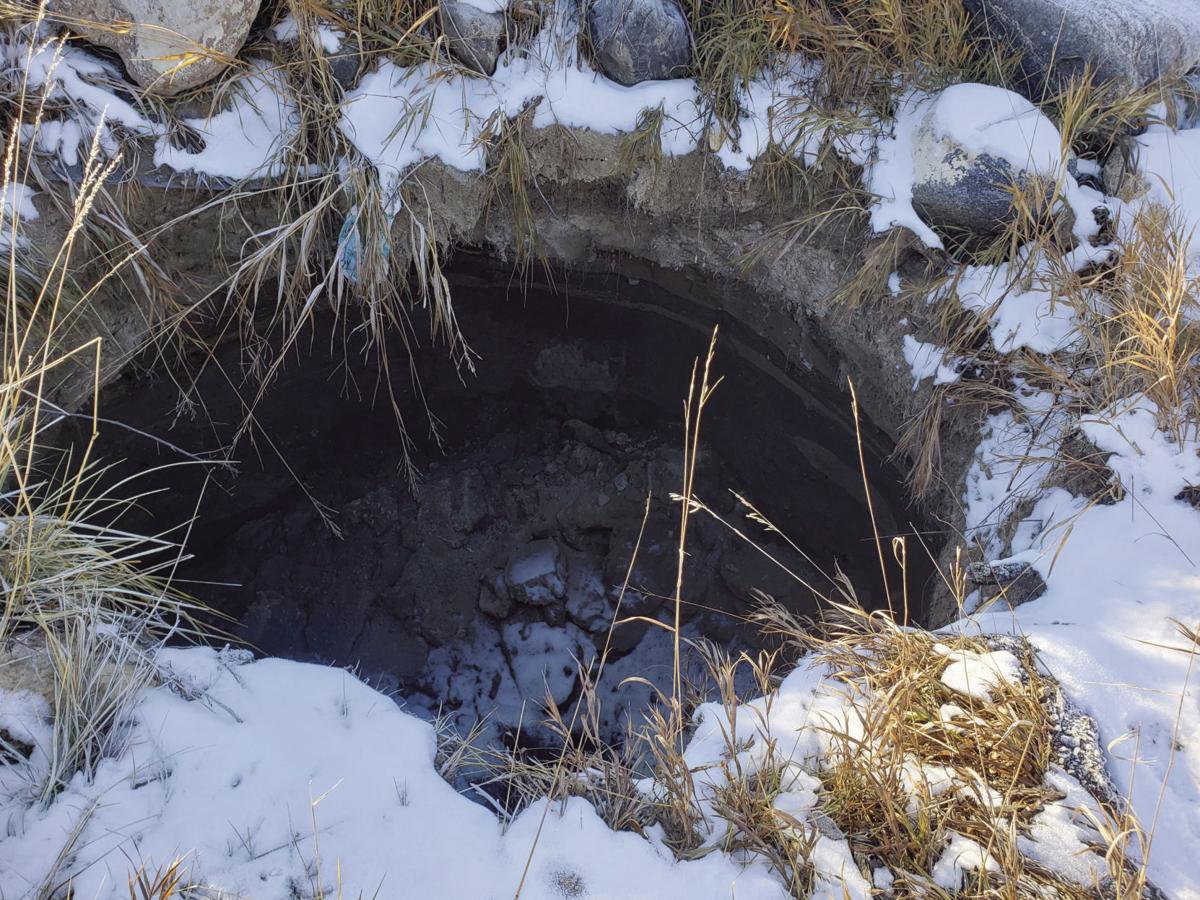 One of the sinkholes at the Shift Services site in Williston along County Road 9. This hole was large enough to cripple a small car, and almost as tall as a person. Northwestern North Dakota has 1,700 abandoned mines that run underneath properties in the West. 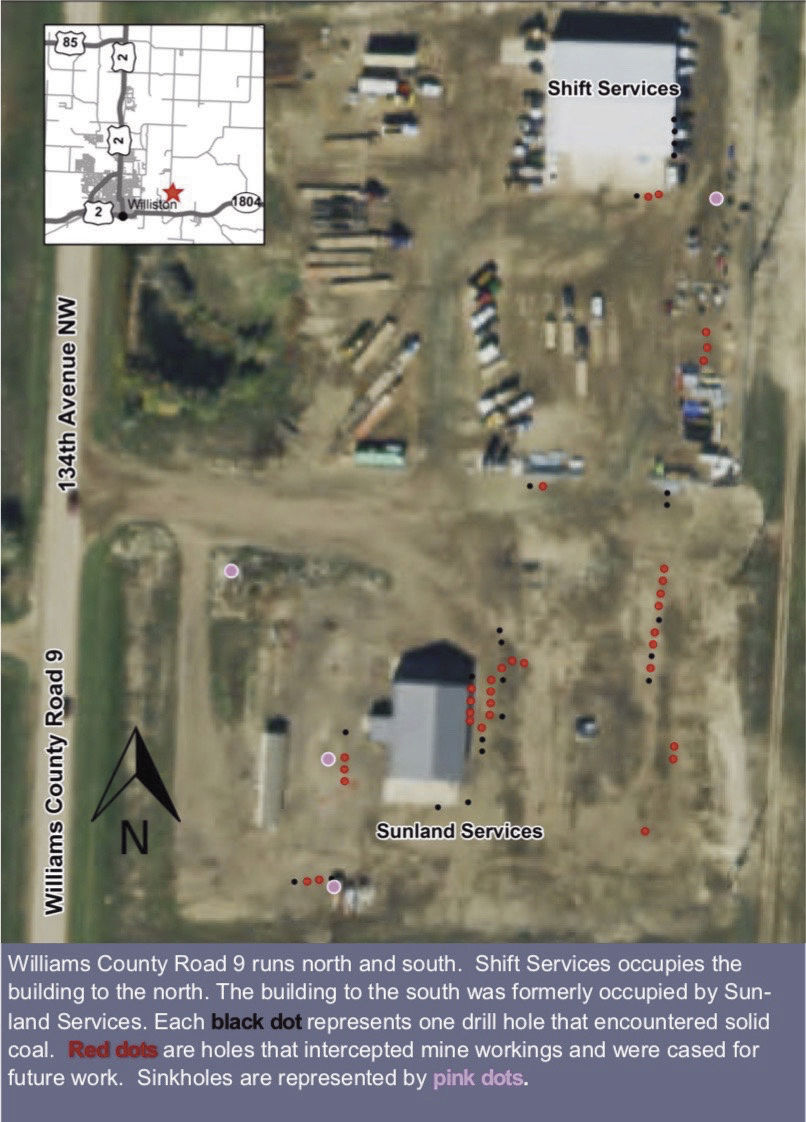 An aerial view of Shift Services and Sunland, where exploratory drilling is finding a trail of sinkholes under and around the businesses, whose owners purchased the properties during the boom.

Joan Breiner uses an iPad to look at maps of exploratory drilling sites to find potential sinkholes at the Shift Services business along County Road 9 in Williston.

One of the sinkholes at the Shift Services site in Williston along County Road 9. This hole was large enough to cripple a small car, and almost as tall as a person. Northwestern North Dakota has 1,700 abandoned mines that run underneath properties in the West.

An aerial view of Shift Services and Sunland, where exploratory drilling is finding a trail of sinkholes under and around the businesses, whose owners purchased the properties during the boom.

A couple of oil and gas-related companies got a little more than they bargained when they purchased properties along Williams County Road 9. It turned out there was an abandoned coal mine underneath the properties. That has led to several sinkholes opening up not only around the businesses, but even underneath them.

The properties were purchased during the boom by different individuals. Incomplete records at the time meant the purchasers were unaware of the land’s problematic history, according to officials with the state’s Abandoned Mine Lands Division, a federally funded program under the Public Service Commission.

The first sinkhole appeared at Shift Services, located at 5140 13th Ave. NW. It was reported to the state’s Abandoned Mine Lands Division in 2017, which focuses on legacy coal mines built prior to 1977 laws that require bonding and insurance for the end of a coal mine’s lifespan.

The funds for the AML program come from an 8-cent per ton fee paid by coal companies. Generally, the funds are not used in cases where a property’s hazards were known or should have been known at the time of purchase. But, these properties were sold during the boom, and the records for this particular coal mine were incomplete. Given the additional hazards to lives and livelihoods of the sinkholes at the location, it was decided to include the site in the program.

The first sinkhole that was reported, however, turned out to be only the beginning. Exploratory drilling has found a long trail of sinkholes following the path of the abandoned Williston Coal & Ice Company, which operated between 1913 and 1936. The company mined two coal seams, producing an average of 14,000 tons of coal annually. The bottom seam was 140 feet below the surface of the earth, and doesn’t appear to extend under any of the site properties.

But the top seam is 65 to 75 feet below the surface. According to a grid pattern of exploratory holes — more than 300 and counting — that part of the mine is collapsing, and the voids are all moving to the surface.

In fact, even as the Abandoned Mines Division work was ongoing, new holes kept appearing, one inside the Shift Services building, and others at neighboring Sunland Services. On a wintry day in November, more sinkholes had appeared alongside a driveway into the facility.

Owners were contacted for further comment about the situation, but did not return the call.

Some of the holes are big enough to swallow a car. They would present definite hazards to life and limb if a person didn’t see them in time, AML Division Assistant Chief Joan Breiner said. Sinkholes also present particular hazards in winter, when a covering of snow can effectively hide their presence.

“(Sinkholes) can give way at any time,” she told the Williston Herald. “A former employee had gone to a site in Beulah and had driven out in the field to look for some sinkholes. She didn’t find any that day, but when she returned the next day, there was a sinkhole in the same place where she had driven.”

Filling in all the holes at the Shift site will be a multi-year, multi-million project. It wouldn’t be possible at all without the 8-cent per ton fee that coal mines pay into the Abandoned Land Mines fund for reclamation projects.

So far, $2.2 million has been spent at the Williston site, and more than 7,500 cubic yards of grout have been pumped into voids that could threaten life and property at the site.

The program, however, is set to expire in 2021, unless Congress agrees to extend it.

“I am personally a big advocate of reauthorizing this program,” Public Service Commissioner Randy Christmann told the Williston Herald.

Not only does the program help with sinkholes after the fact, but the funds can be used for preventive measures, Christmann said — an ounce of prevention that is far less costly than waiting for something to collapse.

However, some in the legislature have proposed using some of the funds for social programs in areas like West Virginia and Pennsylvania, where there have been big economic impacts from the closure of coal mines.

“While I don’t object to those kinds of programs, I do not think the Abandoned Mine Lands program is the proper place to get funding for that,” Christmann said. “This money came in with a commitment to use it for these abandoned mine lands.”

Ask before you build

With 1,700-some abandoned coal mines in northwestern North Dakota it is crucial to ask about the history of any property you plan to purchase in Williams, Mckenzie, Divide and other northwestern North Dakota counties. In general, cities or counties will have records that can help make clear whether a property includes any abandoned mines under them. However, many mines are poorly documented, or records may be incomplete or nonexistent. A site evaluation is the surest way to determine if an area has any mines under them.

To report a sinkhole

To report a sinkhole or get more information about sinkholes in northwestern North Dakota, contact:

The Abandoned Mine Lands program is set to sunset in September of 2021, unless Congress authorizes legislation extending it. Northwestern North Dakota alone has 1,700 abandoned coal mine sites. It will take an estimated 20 years to address the highest priority AML problems in the state.