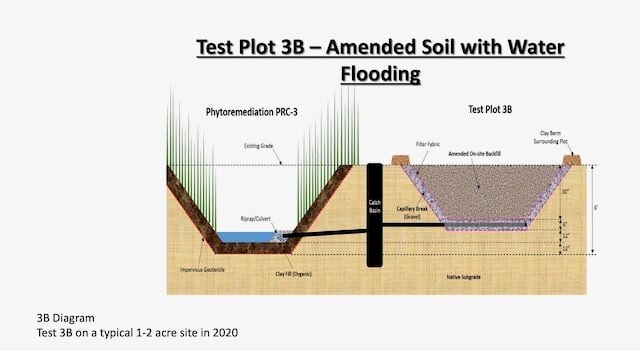 Before and after shots of a phytoremediation technique that could solve North Dakota's legacy brine pond problem.

Before and after shots of a phytoremediation technique that could solve North Dakota's legacy brine pond problem.

North Dakota’s legacy brine ponds have been a blight on the land for almost 70 years now, creeping outward from relatively small pits, slowly but surely spreading — and blighting — acre after acre of once fertile, agricultural soil.

Nature has not been able to reclaim very many of these sites on her own. She has needed help, and, now, decades later, she is about to get it.

North Dakota Department of Mineral Resources Director Lynn Helms told lawmakers on the Energy Development and Transportation Committee recently that he has identified a viable solution for these brine pits, a dubious legacy from the beginning years of oil and gas extraction in the state.

The solution will marry a bit of old-fashioned plant power with a little modern engineering for a process that Helms said will benefit agriculture in both the short and long term.

Helms had a company called Terracon test nine different methods for reclaiming these brine pits over a two-year period from 2017 to 2019. The method performing the best used salt-tolerant cattails in a man-made wetland that was constructed near the area as a trap, to collect the salts over time and remove them from the land.

For this method, the top 3 feet of salt-contaminated soil was excavated and amended before being replaced and irrigated with fresh water to remove salts from it.

“They found if you put two years of normal precipitation through the sprinkler system, you can get the top layer of soil back to productivity within a year,” Helms said.

The amended, excavated soil was placed back over a geotextile membrane that has been topped with a layer of pea gravel. This capillary break puts a little bit of physical chemistry to work, keeping the salt plume from rising up into and spoiling the freshly amended soil.

The large salt plume is still there, of course, and will still continue to percolate upwards. But when it hits the pea gravel and geotextile membrane, drain tiles move it instead into the nearby phytoremediation pond, planted with salt-tolerant cattails. They will take up the salts as they grow, slowly but surely removing them from the soil, season after season after season.

The cattails must be harvested each year, but do have an agricultural use, Helms said. They can be ground up and added to silage or hay as a salt supplement, one that can be safely fed to livestock.

“If the (phytoremediation) pond gets too full and is collecting a lot of water, it gets sucked out by a vac truck and hauled to a saltwater disposal site,” Helms told the Williston Herald. “But under normal circumstances, the cattails take care of it, and it gets hauled to a livestock operation and blended into their feed.”

This technique will not only keep the salt plume from spreading upwards into the top 3 feet of soil where wheat or other crops are now able to grow again in as little as a year’s time, Helms said, but it will also put a stop to the troubling lateral spread as well, which imperils thousands of acres of agricultural soil if left unchecked.

Among the brine ponds Helms showed legislators is one that started out as a mere seven tenths of an acre. Twenty-one years later, however, it was 3 acres, and then just 12 years later, it had doubled in size to 6 acres.

“It doesn’t get into the usable underground water supply,” Helms said. “But the depth of the plume and the high concentration (of salts) in the top 40 feet make it impossible for nature to reclaim this site.”

North Dakota’s brine ponds are a decades old problem that began in 1951 when its oil and gas industry was in its infancy. The state, for a period of about 28 years, allowed oilfield companies to dispose of the briny produced water that is brought up from far below the surface of the earth in unlined pits that had been simply dug into the earth.

The method was discontinued in 1979, in favor of salt water disposal wells, which inject the produced water back where it came from — into formations well below ground water and far, far away from agricultural soil.

Of the 216 legacy brine ponds, about 50 have gone away naturally, Helms said, remediated by time and nature. Another 52 do not show any surface impacts, and nine have court settlements addressing them.

That leaves 105 brine pits that the state needs to address on its own, Helms said.

“Waiting, in my mind, is not an option,” he added. “We need to move aggressively to remediate the problem and stop those effects.”

Helms said the sites in question followed state law at the time.

“These are sites that were released from bonding in 1980 before we had an Oil and Gas Division or any kind of real, serious bonding rules in place,” he said.

That means there will be very little bond money available to clean the sites up. Perhaps around $100,000, Helms estimated.

Cleaning all the sites will cost $8 million over five years, with an additional $2,000 or so in maintenance costs each year.

Money for the cleanup will come from the Abandoned Oil and Gas Well Plugging and Site Reclamation Fund, but the cleanup won’t start until 2022.

For one thing, Terracon’s project needs an additional year of study for complete data, Helms said. The edges of the project were not as robust as hoped, and that will be looked at during 2021, to improve the process.

For another, the fund’s resources have already been designated in 2021 for reclamation of orphan well sites being plugged with CARES Act money this year. That project is part of the state’s Bakken Restart program, which aims to keep oil and gas workers employed during the coronavirus pandemic. It and an international price war have triggered one of the worst downturns in the industry’s North Dakota history.