Sixty-some volunteers caught the nation's attention for a few moments of non-pandemic related news after they helped their neighbor and friend Lane Unhjem harvest about a thousand acres of wheat and canola. 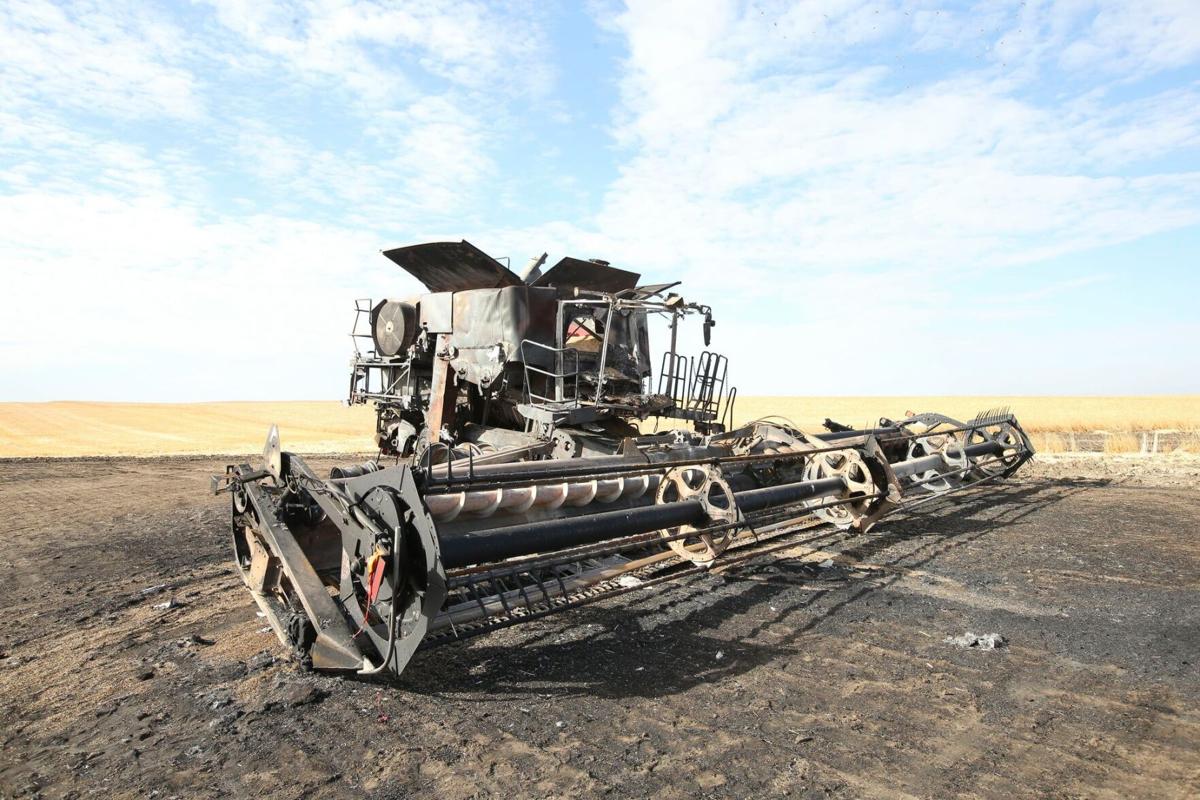 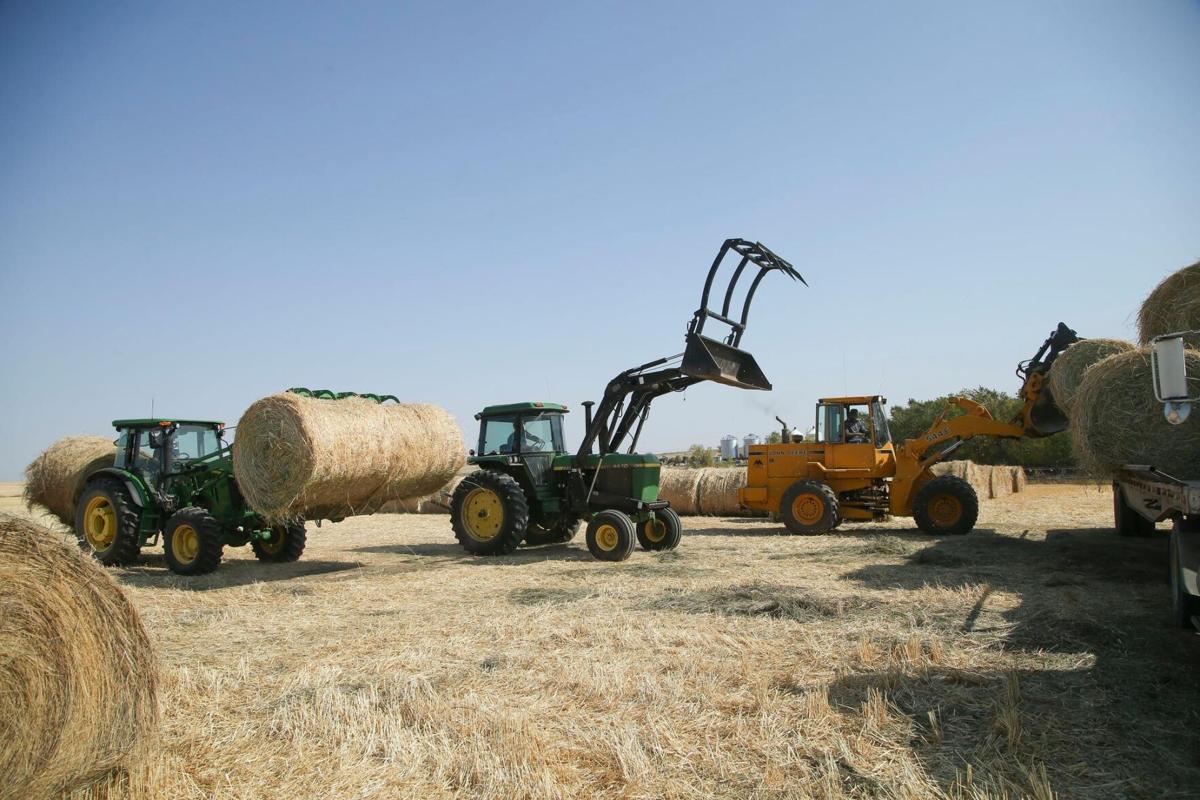 One hay bale after another, until they were all loaded up. That's 714 round bales in four hours by a group of just 20 ranchers. Whew!

Sixty-some volunteers caught the nation's attention for a few moments of non-pandemic related news after they helped their neighbor and friend Lane Unhjem harvest about a thousand acres of wheat and canola.

One hay bale after another, until they were all loaded up. That's 714 round bales in four hours by a group of just 20 ranchers. Whew!

A community is rallying around one of its own in Crosby, North Dakota, and it’s pulling on the nation’s heart strings.

Divide County farmer Lane Unhjem, 57, suffered a heart attack on Sept. 9 while harvesting his wheat and canola. The combine caught fire while he was working, and, amid the stressful effort of trying to put out the fire and save the combine, he had a major heart attack.

A friend rushed him to St. Lukes, after which he was airlifted to Trinity Health in Minot, where he has been in the intensive care unit.

His combine, of course, is a total loss, his daughter Samantha Coates wrote on a page raising money for her father on crowdfunding site GoFundMe. But, she added, her father is on the road to recovery and fighting hard to reclaim his health.

Meanwhile, the community has turned out not just once, not just twice, but three times to help the Unhjem family harvest their crops. With the combine destroyed, the help of neighbors was really the only hope of getting those crops in the bin where they belong, a fact not lost on a tight-knit community that has so many farmers.

The first gathering was the largest, and the one that got all the media attention, with articles appearing in several, national outlets.

“There were roughly 60 volunteers,” Jesse Binde, a family friend, told the Williston Herald. “They brought 11 combines, six grain carts, and 15 or so semis.”

At first, it seemed their effort might not get off the ground after all, due to fog and moisture. But by noon, the sun had taken care of that problem. Maps were distributed, and a small armada of farm equipment sailed out into the fields, harvesting 1000 acres in about 7 hours.

“If Lane was just doing it with him and a hired hand, it would have taken them about two weeks,” Cassie Bummer told the Williston Herald.

Bummer, a medical worker, is the one who set up the GoFundMe page for the Unhjems.

“We all know how fast the medical bills can add up, even if you have full insurance,” she said. “So we just figured it would be nice to start a little something for them.”

Despite the many people and numerous pieces of large equipment all in motion at once, everything went smoothly, Bummer and Binde told the Williston Herald. There were no hangups at all.

“On the last field, everyone met,” Binde said. “We had 11 machines and all the other equipment going in the same field. That was a sight to see.”

During the work bee, other members of the community were preparing a feast of pulled pork and other goodies to feed all the volunteers, a separate effort that Binde said involved a number of volunteers as well.

Binde, an agronomist for a local coop, says the Unhjems are just like a second family to her. Organizing a work bee for them was just a natural thing to do.

“A lot of area farmers know I’m close to them, so they started reaching out to me anyways,” she said. “I didn’t have to call anyone. It all just came to me.”

There have been two more, smaller work bees since that first one. One to harvest about 300 acres of soybeans, and the other, more recent, to bring in all the hay.

Unhjem is now off the ventilator, volunteers at the latter were told by his daughter Tabitha. His first words were, “How’s the weather?”

Coates thanked the community for all the help it has given the family so far on the GoFundMe page Bummer set up for them, where she has been updating her father’s progress.

“We can’t thank everyone enough for the continued prayers, harvest help, food help, helping to organizing everything and being there for us during this time. You are all so amazing and we can’t express how much you all mean to us and how much we appreciate you.”

As far as all the national attention, Bummer and Binde said they are just a tight-knit community that pulls together often. They don’t see anything unusual in what happened.

“Out in the country, someone living 10 miles away you still consider them your neighbor,” Bummer said. “Whenever any farmer or neighbor gets tangled up with something, it doesn’t take long for them to pull together to help out.”

"Whenever any farmer or neighbor gets tangled up with something, it doesn't take long for them to pull together to help out." — Cassie Bummer