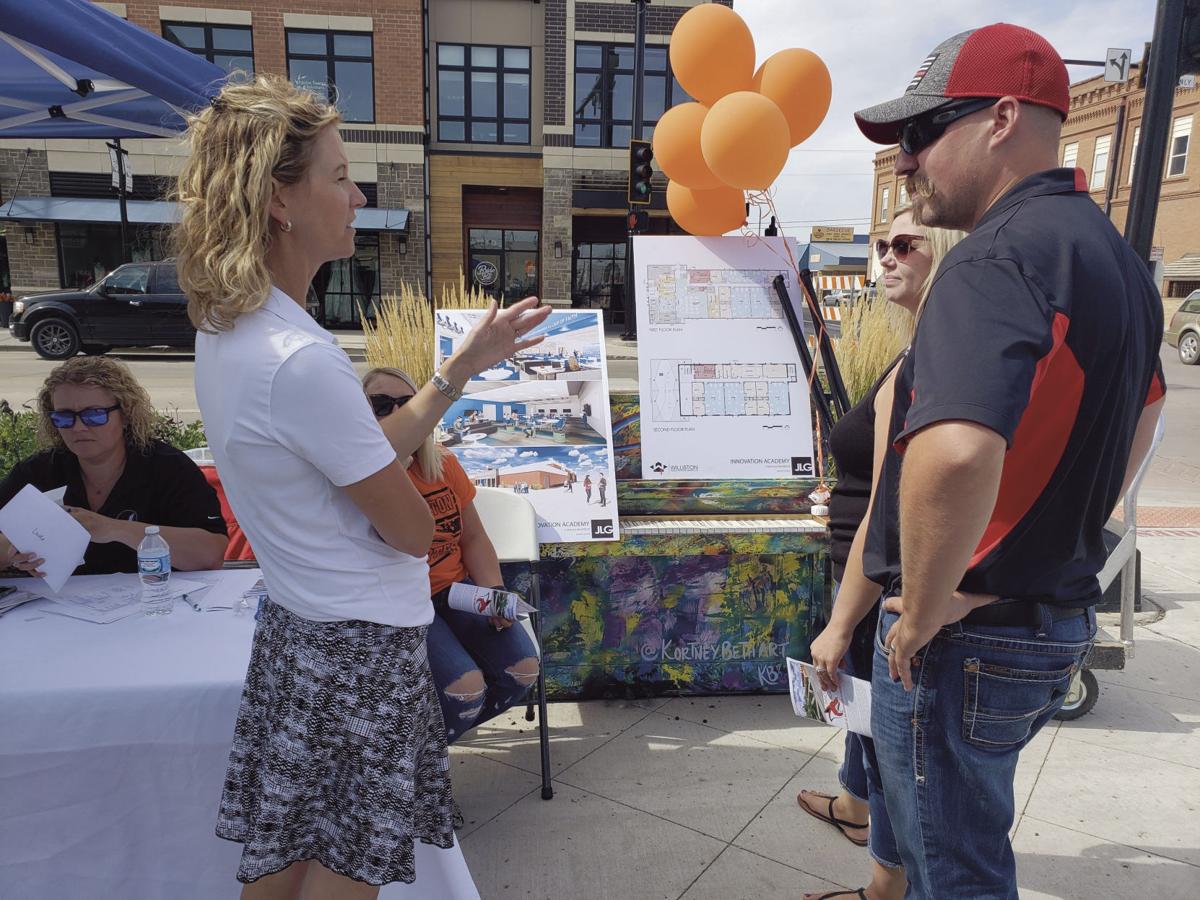 Williston Public School District No. 1 school board president Joanna Baltes speaks with Allayna and Brenden Stevens during a pop-up lunch that raised money to help the district renovate the old Hagan pool building. 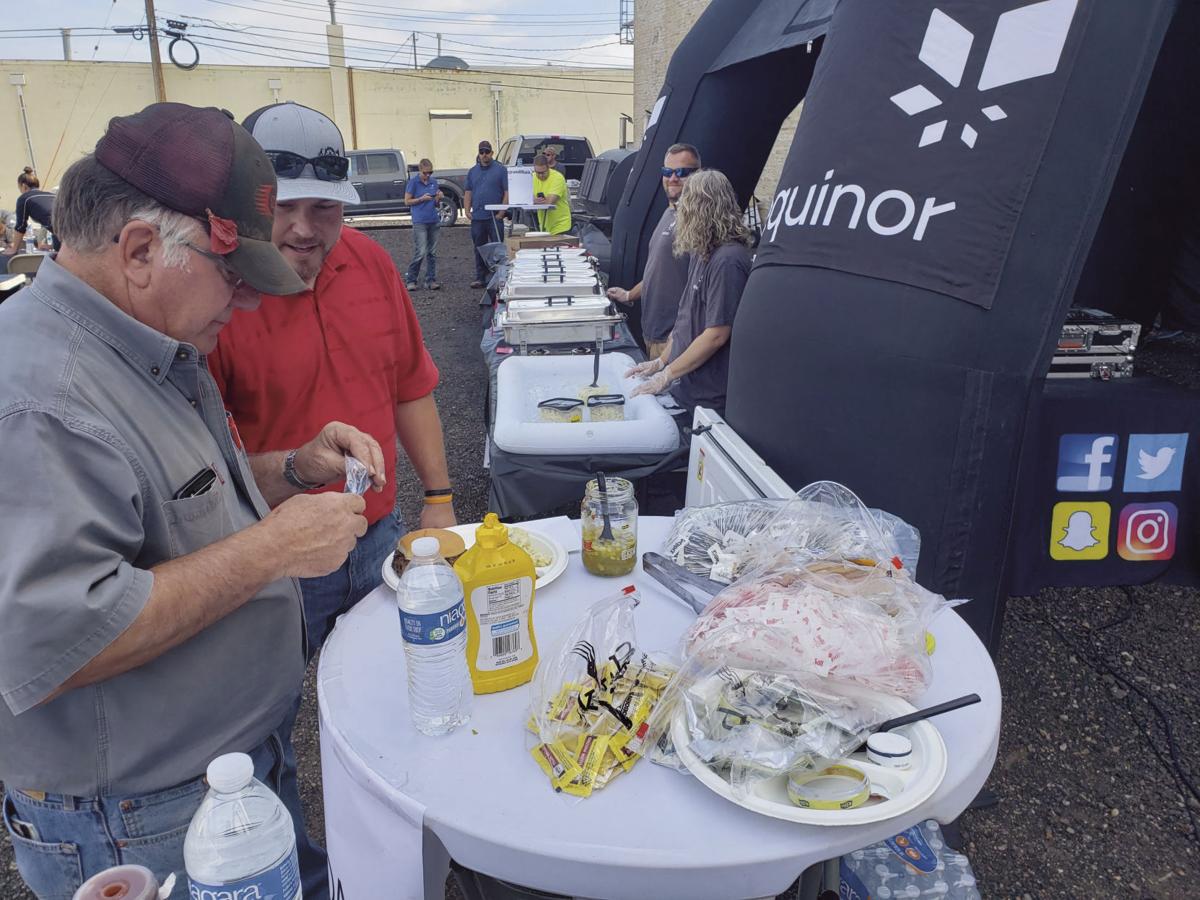 Williston Public School District No. 1 school board president Joanna Baltes speaks with Allayna and Brenden Stevens during a pop-up lunch that raised money to help the district renovate the old Hagan pool building.

Equinor’s pop-up lunch for the Innovation Academy gave Williston Public School District No. 1 a boost, and not just for its Innovation Academy. Teachers, administrators and boosters alike were buoyed by Friday afternoon’s strong show of community support, after the stinging defeat of two bond issues earlier this year that were meant to help the district alleviate overcrowding.

The district’s enrollment numbers have continued to swell, thanks to an influx of oilfield workers and their families. While the senior class has around 250 students, District 1 school board president Joanna Baltes said enrollment at the kindergarten is now 400, and freshmen are 345, indicating that the enrollment is continuing an upward trend.

Baltes said it was hard to put into words how much Friday afternoon’s sell-out event meant to her and others in the district.

“It’s super wonderful to see this many people coming out to hear about what we’re doing,” she said. “This will be a different direction than most districts, and the Innovation Academy will be the center of it.”

The idea for the Innovation Academy took off last year after a group of teachers saw the learning style in Arizona and decided it to bring it back home to Williston. At its heart is an unstructured, personalized style that helps motivate students to take charge of their own, self-paced learning. That, in turn, gives teachers more time to spend one-on-one with other students who need it.

Those who are fast learners are not held back, nor are those whose pace might be slower pushed to go faster than will work well for them.

The pilot began with a group of fifth graders, but the success and value of it was immediately apparent, Baltes said. The effort continued this year, both with last year’s fifth graders (now sixth graders) and a new set of fifth graders.

The new approach will be implemented districtwide, but having a physical location for the Academy gives the new style a central hub from which to grow and develop. The center will also help to alleviate some of the overcrowding at the district, by pulling one hundred students each from fifth, sixth, and seventh grades. Another 100 from eighth grade will be added later.

The idea for the Innovation Academy has been getting tremendous support in the community, Baltes said, and that support was nowhere more evident Friday afternoon than at the Equinor-led barbecue. The event sold out of pulled pork sandwiches right off the bat.

Big brats and beefy burgers were procured from area grocers for a quick substitute. No one minded. The event wasn’t about food, nor the great music playing in the background. It was all about the worth of the cause.

Among the many boosters attending the luncheon were Allayna and Brenden Stevens, who have a first grader in the district.

“We were both born, raised and graduated here in Williston so we want to support the school district however we can!” Allayna said. “Our kids are still young, but we are excited to see what our School District is doing to support our students now and for the future. We feel it’s important that our community gets involved in the process because our kids are Williston’s future leaders and what better way to invest our money than to invest it into our schools?”

They weren’t the only ones thinking that way. Equinor’s Linda Pittman said the event had easily served sandwiches to between 400 and 500 people. Going into the event itself, Equinor had also already lined up $170,000 in pledges from companies they’d challenged to match their $10,000 donation.

After the event concluded, Baltes said the event had raised a total of $185,000, bringing the total raised from community sources to $900,000 so far.

The goal is to raise $5 million from the community. The district will kick in $8 million from its building fund. It can also apply for a grant from Williams County if needed.

The Innovation Academy will be housed in the old Hagan pool building, which has been vacant for quite some time, and will need quite a bit of renovation.

Baltes said abatement work will begin within the next couple of weeks in the building. Restoration work is set to begin in October.

The Academy will be open next fall. Selection criteria will be developed even as the construction work is ongoing.

The criteria will be different than the set used for the gifted academy, Baltes said.

“This will focus on all or any students,” she said. “Every child has different learning styles. Some kids need it more hands-on, others are more visual. Maybe one student is at a third-grade level for English and fifth-grade for math.”

The Academy won’t just be teaching students. The Academy will be a central hub, offering a hands-on look at this new approach to teachers, to help spark new approaches for them in their classrooms.

“Once teachers see this in action they get it,” Baltes said. “They say I can do this.”

Williston Public School District No. 1 seeks to raise $5 million from the local community to support its Innovation Academy. So far, including the Equinor pop-up lunch, it has raised about $900,000 of that amount.