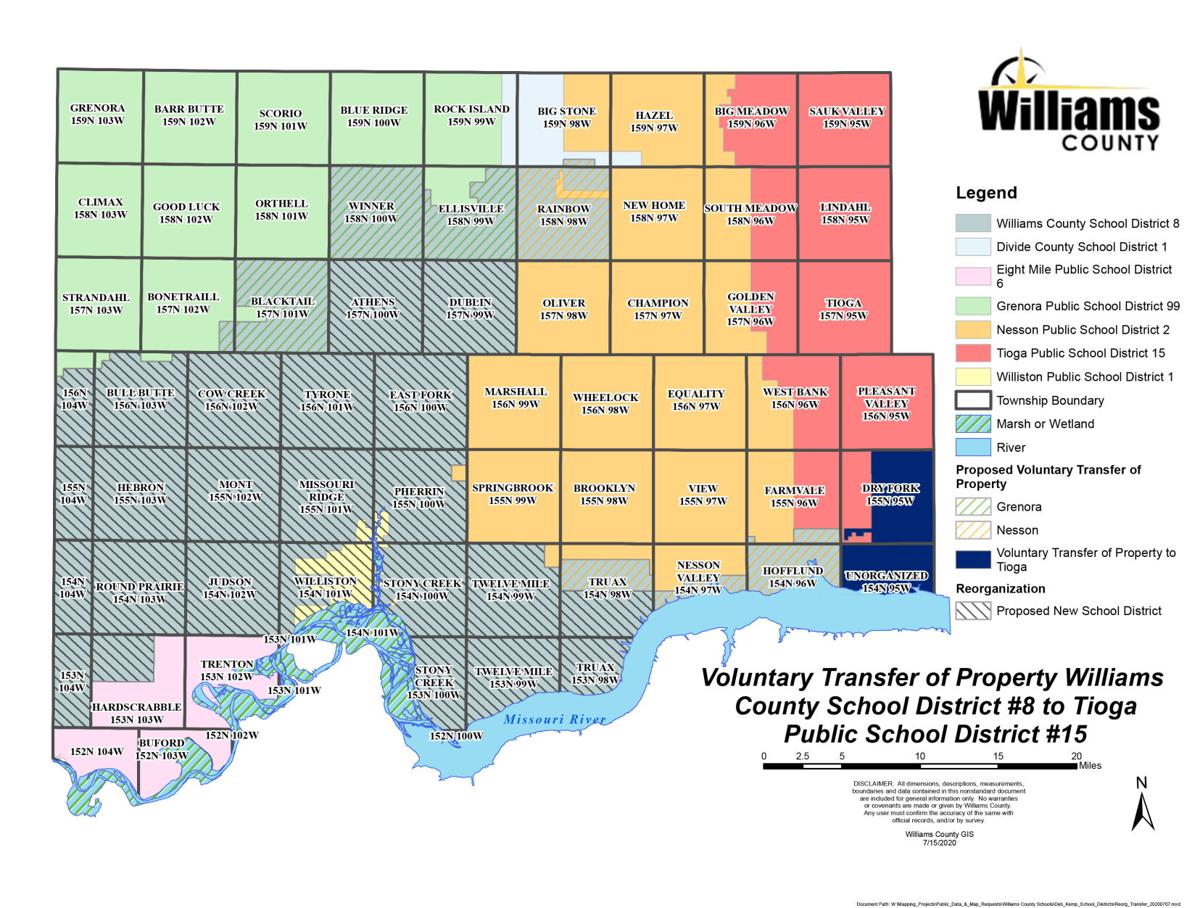 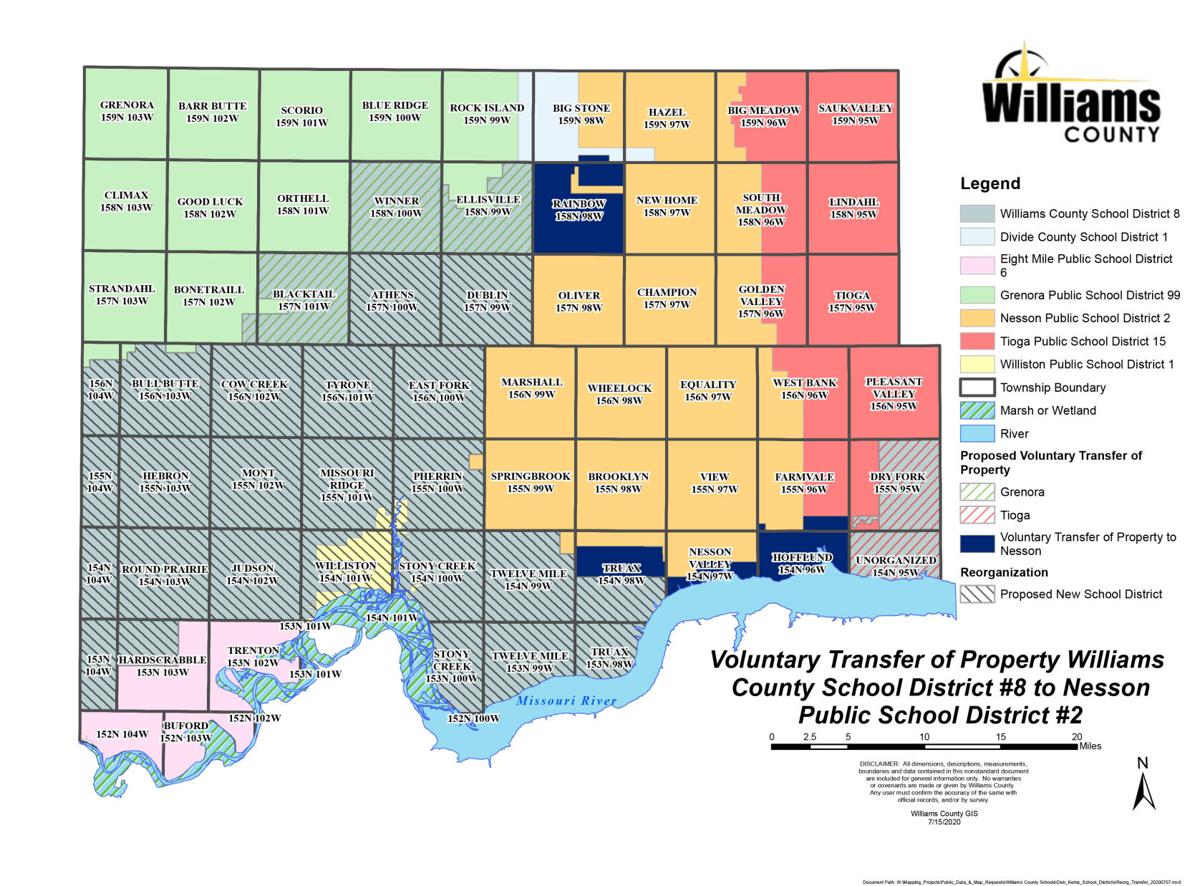 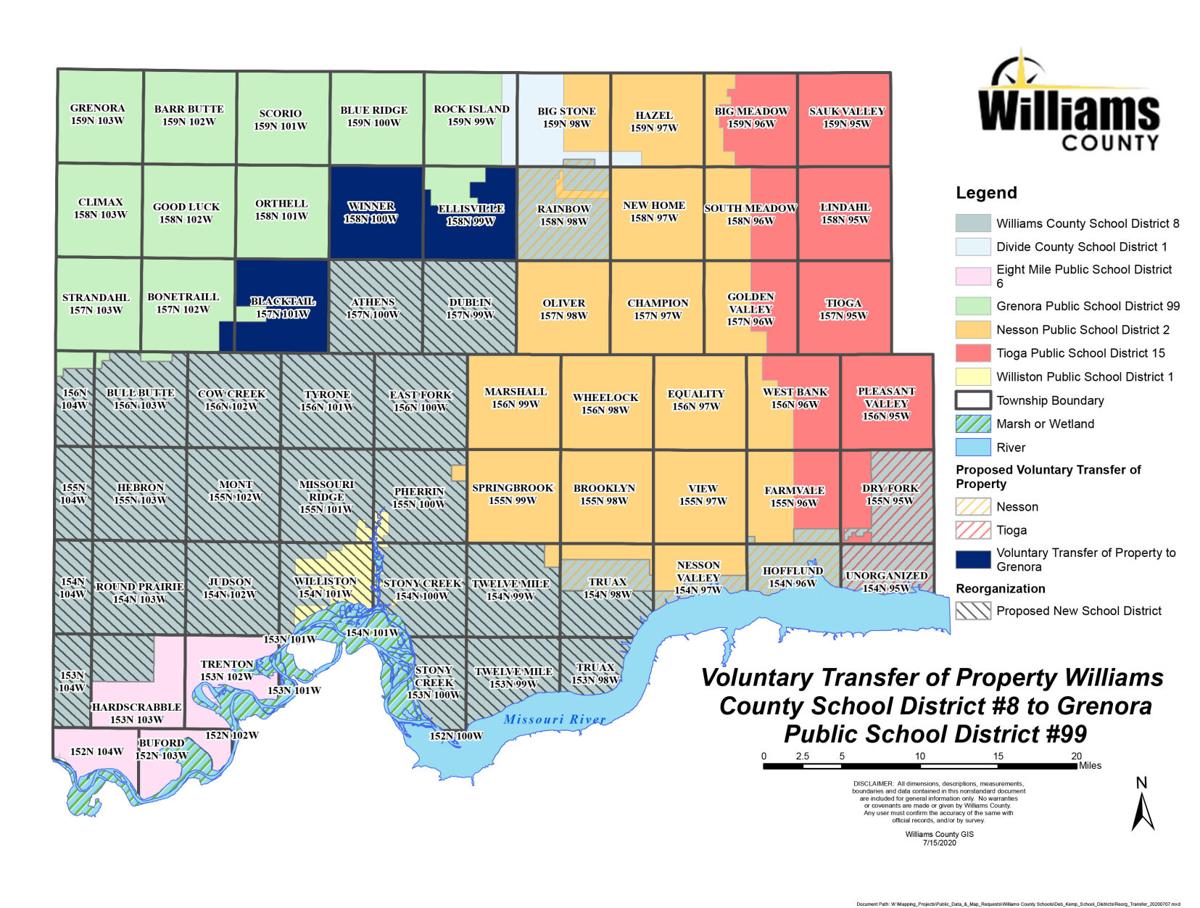 Williams County Public School District No. 8 is moving forward with giving away part or all of eight townships to other districts, about 15% of the district’s taxable valuation.

The move to transfer the property is part of the effort to develop a reorganization plan with Williston Public School District No. 1 that would go up for a vote before Dec. 31. The land transfers will move in parallel with the reorganization process, but will be approved independently.

That means if both the county and state commissions that look at land transfers approve the proposals, they would take effect July 1, 2021, regardless of whether the reorganization vote succeeds.

The board approved transfering about $8.5 million in property to Tioga and $4.8 million to Grenora without discussion at its special meeting Friday, July 17. The transfer to Ray, however, brought some disagreement.

The board approved transfering $6.4 million in property on Monday, but board member Sarah Wilson had asked to consider giving them more. Residents were concerned that only part of Truax Township would move districts under the proposal.

The students who live in the area all attend school in Ray and residents wanted to be part of that district.

Board member Myles Fisher said he knew some in Ray had wanted more.

“There’s some upset people down there,” Fisher said of residents in the Long Creek area of Truax Township. “I just want to say, I do feel what we did for Ray was a reasonable solution.”

Williams asked about changing the board’s proposal. District 8 board president Chris Jundt said in order to do that, the board would have to vote down the proposed transfer, vote to overturn its votes from Monday and then start the process over.

“I think we have to put this to bed,” board member John Kasmer said. “I think we did it for the right reason. If the transfer was hooked onto the vote, that would be different. But we can’t take the chance (on losing the $1.9 million in value from Truax).”

Board Vice President Kyle Renner said he stood by the board’s earlier decision.

“I think we got a good compromise with those sections,” he said.

The board voted 5-0 to approve that transfer, as well.

The District 1 and District 8 boards will hold a joint meeting at 6 p.m. Monday, July 20, at Williston High School, where they will vote on the reorganization plan. Public information sessions are planned for next week, as well.