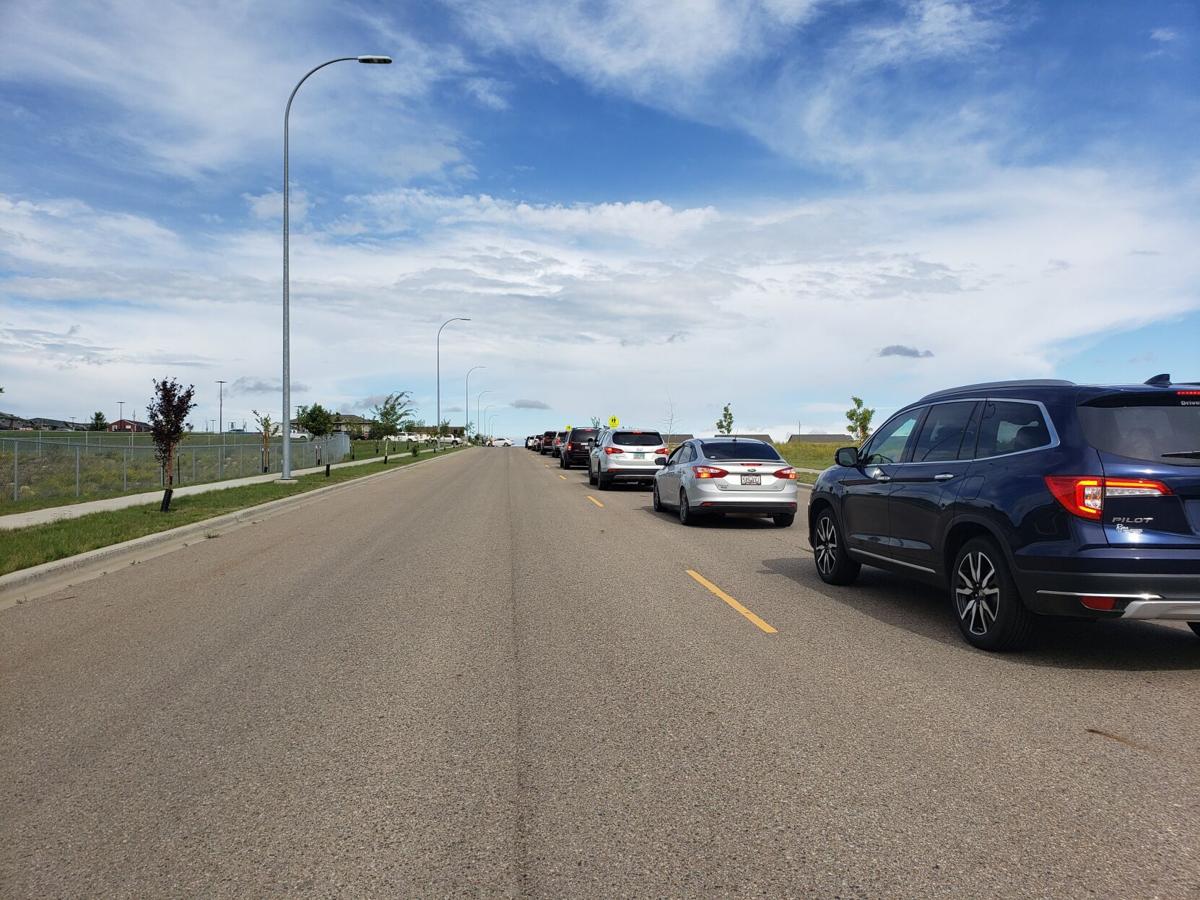 Cars line up for COVID-19 testing Monday at the Williston High School. Four hundred tests were available. UMDH officials said they hope to have another testing event next week. 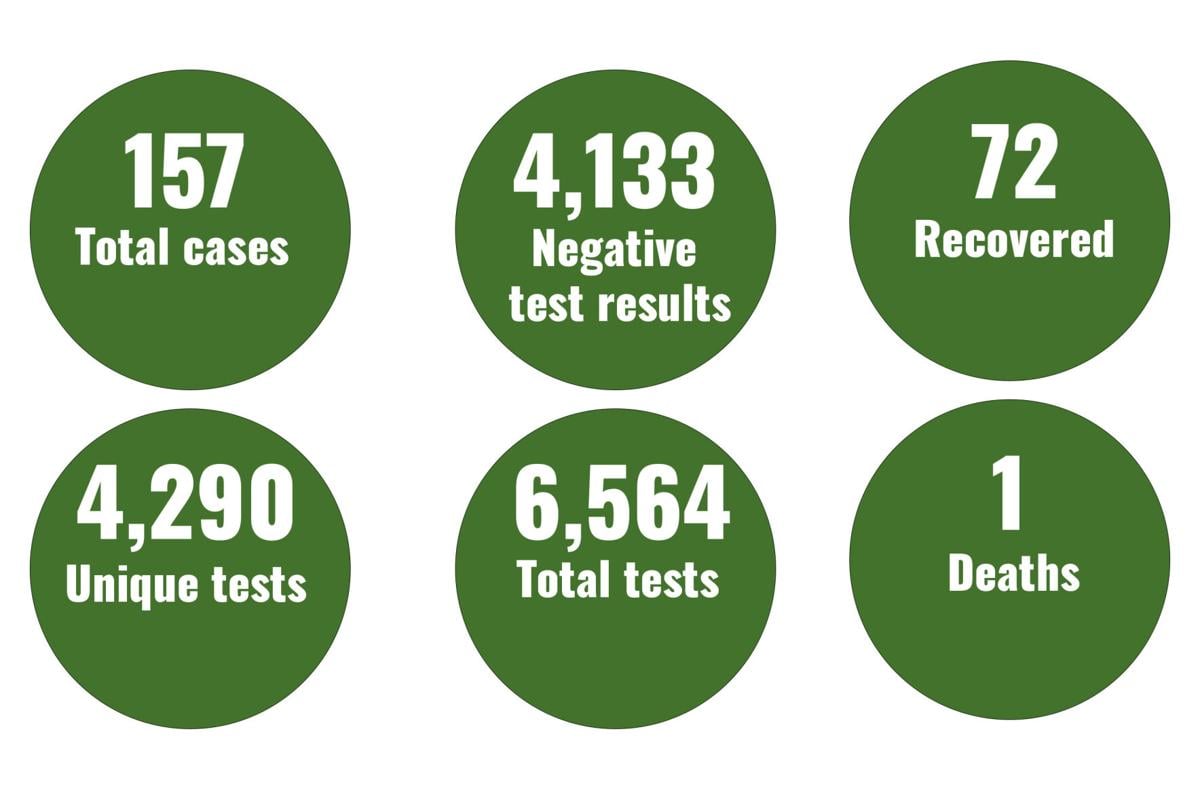 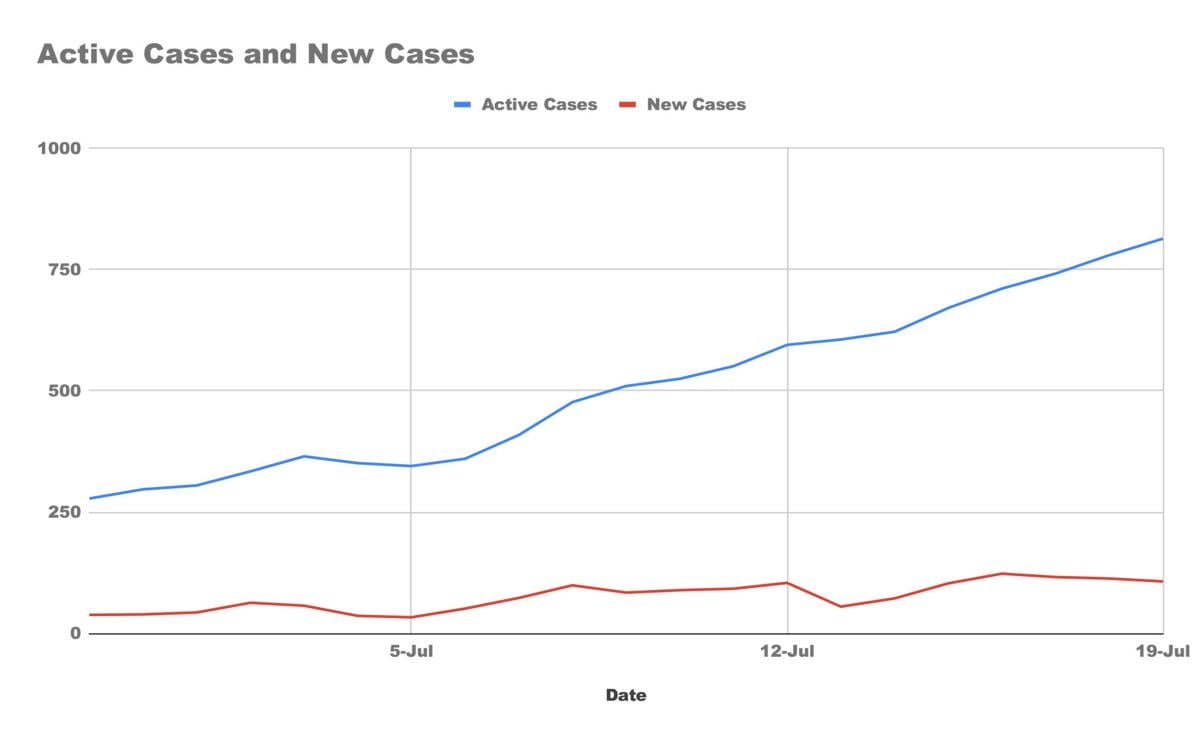 Over the last 21 days, the number of new and active COVID-19 cases has risen statewide, with 814 active cases reported Monday, July 20.

Cars line up for COVID-19 testing Monday at the Williston High School. Four hundred tests were available. UMDH officials said they hope to have another testing event next week.

Over the last 21 days, the number of new and active COVID-19 cases has risen statewide, with 814 active cases reported Monday, July 20.

North Dakota is hitting new highs for coronavirus cases, even as Williams County itself is seeing a spike in coronavirus numbers.

New coronavirus cases in Williams County have more than doubled in the past seven days, going from 55 new cases of coronavirus since July 1 to 120 new cases on Monday with 22 new cases reported that day, as well as the county’s first death.

Daphne Clark, with Upper Missouri Health District, said it was unfortunate, and reiterated the importance of everyone following CDC guidelines throughout the pandemic.

Williston High School was the site of a COVID-19 testing event Monday, which had a total of 400 tests to offer. Clark said the hope is to have another testing event at the same time and place next week.

It is not known when the static testing site planned for Williston will be opening. Gov. Doug Burgum had said in a news media conference that static sites would be opening in several locations including Williston on Monday. A request for information about the site has been sent to the state’s Joint Information Center.

The spike in cases in Williams County and North Dakota follow on additional testing in the state, as well as the state’s continued reopening, which has progressed from bars and restaurants to nursing homes, and soon, senior nutrition centers.

The state announced guidance on reopening nutrition centers on July 16. Centers are to submit a reopening plan to the state outlining how they will modify operations to meet guidelines before reopening.

The guidelines suggest that meal sites operate at only 50 percent capacity in the dining area, and that they maintain proper social distancing of at least six feet. Food is to be served by employees, rather than self-service.

North Dakota reported 107 new cases of coronavirus and 88 recoveries for Sunday, which raises the state’s active case count by 18 to 814. That beats the previous day’s record 671 cases, as compared to the peak in May of 649 cases.

Williams County has 84 active cases, according to figures on the state’s statistical dashboard, with 157 total cases, 72 recoveries and one death. It has the fifth most total cases so far and the third highest number of new cases for Sunday.

It remains uncertain, however, how many out-of-state cases are present in the west, where a two-week on, two-week off schedule is common, and construction crews for the summer may often include an out-of-state component.

People who list an out-of-state address are not counted in the daily count, Gov. Doug Burgum has said.

The recent outbreak in Tioga involving eight workers for Hess contractor Ohmstede, for example, were all out-of-state workers. It is not known if any of those cases counted in the state’s daily total. The state has refused to say whether those individuals were counted, saying it would violate HIPPA laws to clarify that point.