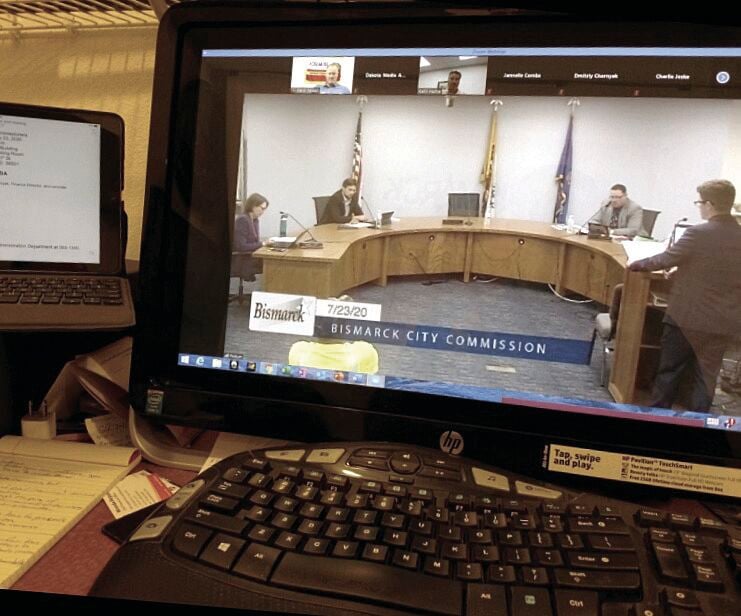 Members of the Rolla School Board last week discussed the district's preliminary plans for reopening next month. Pictured, from left: Brett McCloud, board member; Jessica Rosinski, business manager; Seth Bercier, board member; Janelle Carnahan, board member and Tim Mickelson, board member. On the computer screen joining the meeting via Zoom is Scott Gailfus, board member. (Turtle Mountain Star, Rolla) 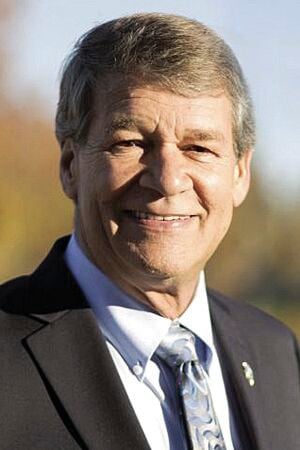 ATTORNEY GENERAL WAYNE STENEHJEM: "We have a longstanding tradition in North Dakota that's enshrined in our constitution that all of our governing meetings are open and accessible to the public," Stenehjem said. "I treat that as something of paramount importance."

Members of the Rolla School Board last week discussed the district's preliminary plans for reopening next month. Pictured, from left: Brett McCloud, board member; Jessica Rosinski, business manager; Seth Bercier, board member; Janelle Carnahan, board member and Tim Mickelson, board member. On the computer screen joining the meeting via Zoom is Scott Gailfus, board member. (Turtle Mountain Star, Rolla)

ATTORNEY GENERAL WAYNE STENEHJEM: "We have a longstanding tradition in North Dakota that's enshrined in our constitution that all of our governing meetings are open and accessible to the public," Stenehjem said. "I treat that as something of paramount importance."

When the COVID-19 pandemic started to pose difficulties for local and state officials, Attorney General Wayne Stenehjem knew it was important for meetings to remain accessible even if they could not be held in the same way.

“A pandemic is not an excuse to close up all of our government meetings,” Stenehjem said. “Fortunately, with technology they don’t have to be.”

Stenehjem kept this in mind when forming the guidance around meeting requirements across North Dakota during the pandemic. The guidance was amended March 30 to reflect the waiving under Executive Order 2020-16 of the requirement that each meeting should have a physical location that is accessible to the public.

Following this guidance, local officials across the state have been implementing new measures to open meetings such as social distancing and remote meeting conditions like live-casting meetings or holding them on Zoom.

Mayor Steve Bakken of Bismarck said while he finds it easier to meet with city staff in person, the technical aspect of figuring out remote conditions was the only hurdle to overcome.

“The ability to work remotely and from a safe manner, from an informational perspective, has been absolutely enjoyable,” Bakken said. “The virtual aspect gives people a lot more flexibility. I’ve heard nothing but positive (feedback) from that.”

Some local bodies, such as the Grand Forks City Council, had already begun implementing virtual components for meeting access. Dana Sande, the council’s president, said the city will continue to stream meetings live on Facebook as well as on the GFTV 2 station.

“This actually has been a very easy transition for us because we’ve been doing it for a long time,” Sande said. “I think people have continued to have the accessibility they’d had in the past, just not necessarily in person.”

While many continue to utilize virtual components, some governing bodies are also returning to meeting in person when possible while implementing social distancing. The Hillsboro City Commission has begun opting for larger spaces such as the Main Street Community Center for meetings to allow for more distance between those who attend.

Hillsboro City Council President Terry Sando said virtual meetings the council held on Microsoft Teams might have led to more community attendance because of the ease of joining at home, but they lengthened the process of voting on items and might have intimidated community members who wanted to give input.

“There might be that hesitance of coming up on the computer,” Sando said. “When you’re sitting out in the audience, it’s more of a free-flowing forum.”

Journalists across North Dakota have continued covering local meetings, whether they are held virtually or in person. North Dakota Newspaper Association attorney Jack McDonald said having the ability to cover meetings virtually will help the press in the long run.

“The whole idea of open meetings in the first place is to keep the public informed of what’s going on,” McDonald said. Broadcasting meetings allows citizens to observe and the press to report, he said. “If you held closed meetings, the press couldn’t come.”

Neal Shipman, editor of the McKenzie County Farmer, said part of the importance of covering open meetings is hearing the full story of what goes into city and county decisions, aside from what is later included in the minutes.

“That’s the value of having the media attending these meetings” Shipman said. “It becomes the eyes and ears of the community.”

Jason Nordmark, editor of the Turtle Mountain Star in Rolla, N.D., said while the initial social distancing and preparation for COVID-19 at local meetings had an “eerie feel” and the topic quickly dominated most coverage, local officials have been helpful with facilitating coverage during this time.

“Everybody’s been really cooperative with everything we’re trying to cover,” Nordmark said. “Rather than talking about taxes and property values or what’s going on with the city police, we’ve been talking about COVID just like everybody else.”

Cole Short, journalist for the Hillsboro Banner, said city council and school board meetings moving online has changed typical coverage in some ways, such as having to call back after virtual meetings for follow-up questions instead of having the ability to ask them in person.

Now as Hillsboro City Commission meetings return to being held in person, Short said aside from the addition of masks and social distancing, covering meetings has returned mostly to normal.

“Overall, I think all our public bodies did their best in terms of trying to get meetings online and accessible to not only us as a media organization but to the general public as well,” Short said. “The work that city officials are doing should be public. It’s important for the public to know what’s going on.”

“We have a longstanding tradition in North Dakota that’s enshrined in our constitution that all of our governing meetings are open and accessible to the public,” Stenehjem said. “I treat that as something of paramount importance.”