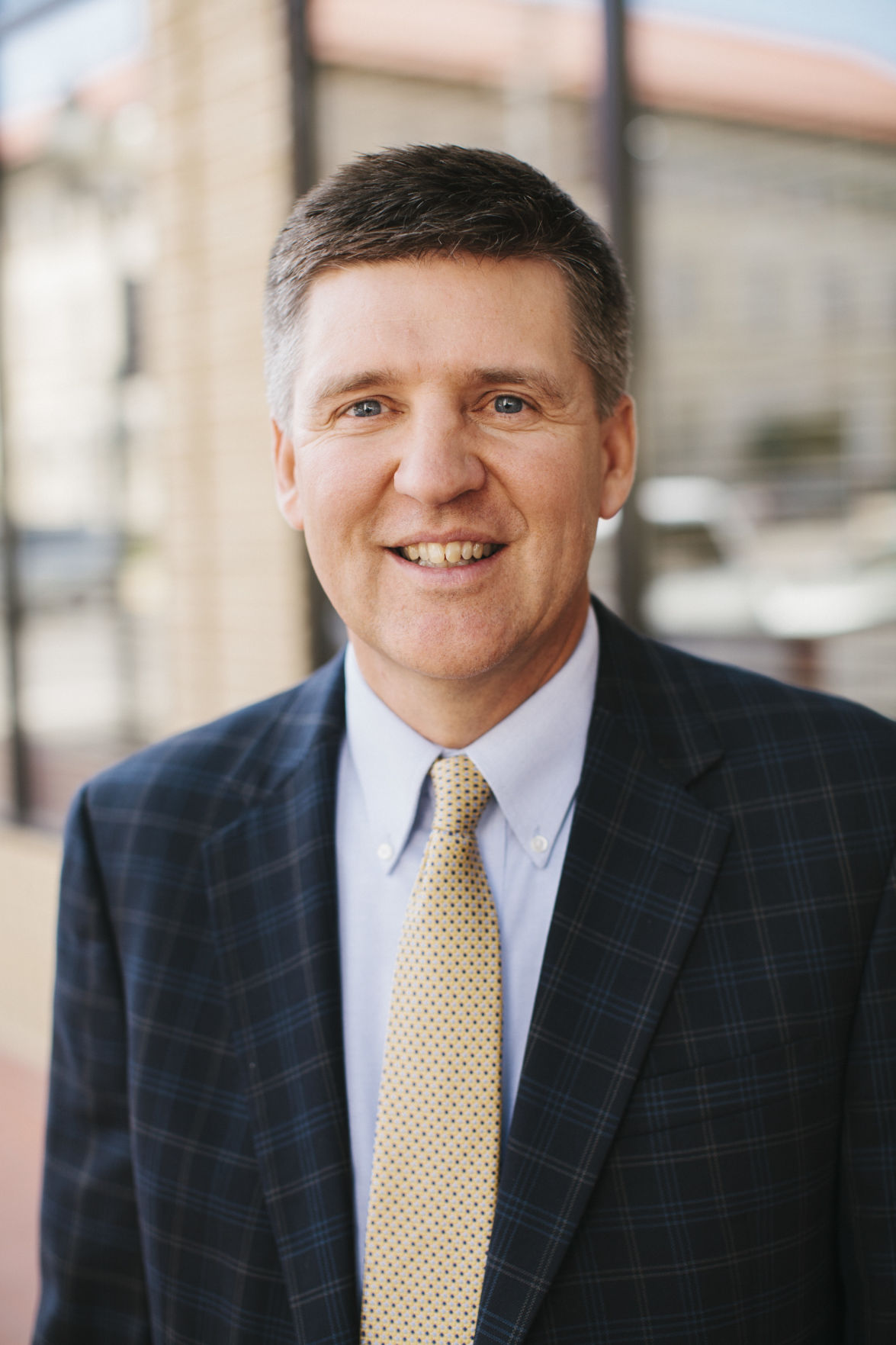 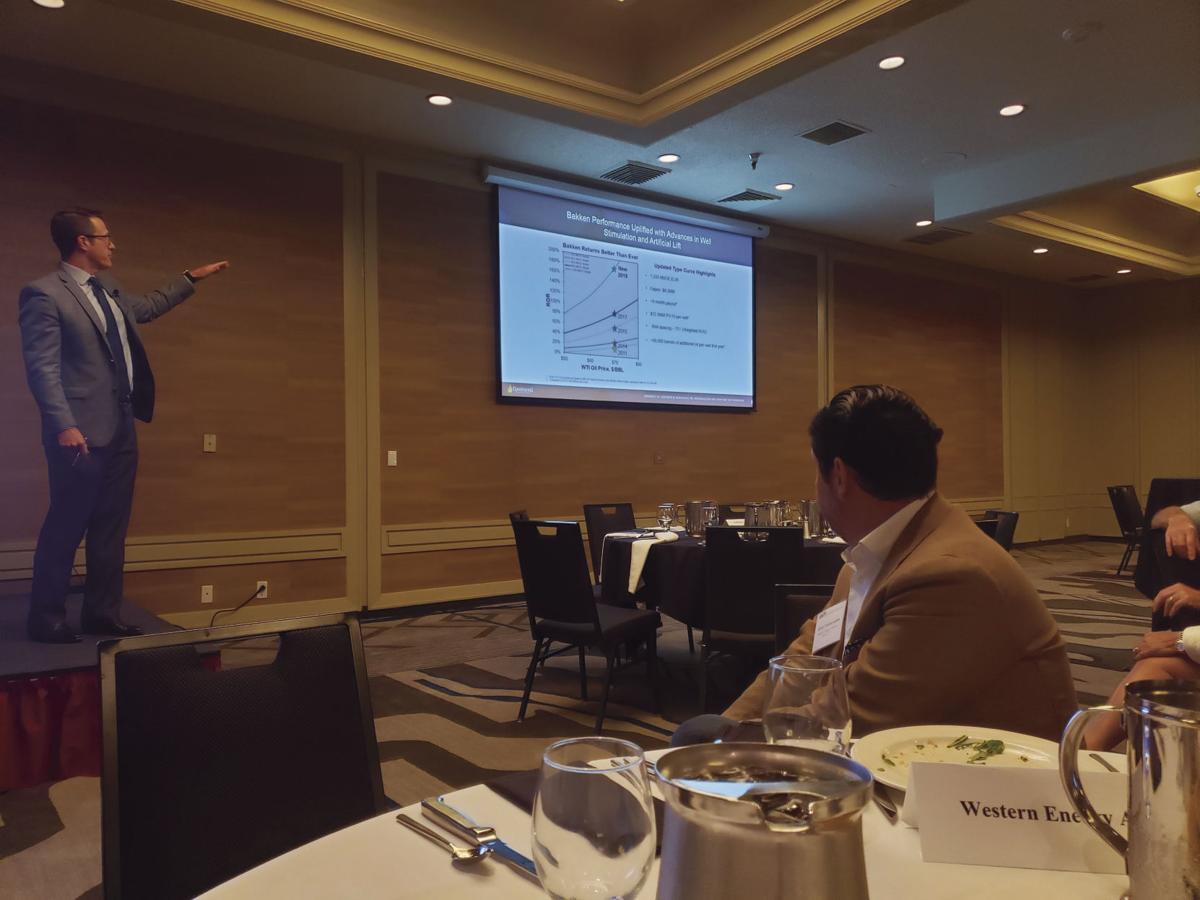 Blu Hulsey, Continental Oil’s Sr. Vice President for HSE and Government and Regulatory Affairs, gestures to a slide that shows Bakken returns continuing to rise in this 2019 file photo take at the Montana Petroleum Association convention in Billings.

Blu Hulsey, Continental Oil’s Sr. Vice President for HSE and Government and Regulatory Affairs, gestures to a slide that shows Bakken returns continuing to rise in this 2019 file photo take at the Montana Petroleum Association convention in Billings.

A hearing Wednesday examining whether to declare crude oil production in the current market scenario a waste drew opposite opinions from the state’s No. 1 oil producer and its No. 1 oil and gas industry association.

The North Dakota Century Code defines waste as production of oil below market cost and in excess of market demand, and requires the state to take action to prevent it, Continental Resources Senior Vice President of HSE and Government and Regulatory Affairs Blu Hulsey told the North Dakota Industrial Commission on Wednesday.

“As the second largest producer of oil in the United States and at the current market prices, North Dakota operators are contributing to waste by producing in excess of reasonable demand and in excess of global storage capacity,” he said. “When you apply the above cited North Dakota statutes to the current situation, waste is clearly occurring and is expressly prohibited by law.”

But the North Dakota Petroleum Council had an almost exactly opposite opinion on the matter. The industry association represents 650 oilfield companies in North Dakota, South Dakota, and the Rocky Mountain Region that collectively account for 98 percent of the Bakken’s oil production.

NDPC President Ron Ness said many oil producers in the United States and in the Bakken have already curtailed production voluntarily, based on their individual circumstances and contractual obligations.

Those are in general too varied for a one-size-fits-all approach, Ness said. He credited early action by the North Dakota Industrial Commission to allow waivers to shut in wells as a smart step. That has allowed some 6,900 producing wells to voluntarily shut down, and it’s saving around 550,000 barrels of oil per day for a better market.

“The number of shut-in wells and foregone production continues to increase daily, signifying that a market-driven, operator-by-operator determined response to unprecedented market indications is the correct approach, as opposed to government intervention,” Ness said. “NDPC believes a one-size-fits-all approach from state regulators on this issue is problematic and potentially harmful as the industry struggles to stabilize and recover.”

“Some producers have been more disciplined in their operations and have voluntarily shut in production, but this practice has not been uniform across the basin,” he said. “Clearly, what is needed now is the allocation of production volumes among producers through a reasonable temporary proration schedule set by the NDIC. Continental supports some form of oil proration in North Dakota as a broad-based solution and in compliance with North Dakota statutes.”

He added that while Continental believes in free markets, the oil and gas market is not one.

“Continental has consistently championed free market principles and causes, but a free market has never existed in the oil and gas industry, and as long as countries are manipulating supply based on geopolitical concerns, we will not have free energy markets,” he said.

Nor are hedges the correct solution, Hulsey suggested.

“The majority of corporate oil and gas hedges are financial in nature and do not require immediate production and sales of the hedged barrels to realize the benefit,” he said. “The benefit of the hedged price will be realized at the time the hedge is called or at the expiration of the hedge and is usually realized without actual barrels being sold. It should also be noted that royalty owners and the State of North Dakota get no benefit from the corporate financial hedge.”

Ness agreed with Hulsey’s point about market manipulation in his testimony — to a point.

“We do acknowledge the complexities of the global crude oil market and the political effects various oil-producing nations can have on the Williston Basin,” he said. “However, proration by the state will not address the current imbalances we face in the COVID-19 pandemic. Additionally, we are already seeing market fundamentals realign as stated earlier, with companies making capital and production cuts on their own. Proration is not needed for the Bakken and should not be considered by the Commission.”

Ness applauded the state’s Bakken Restart Task Force, which is looking at ways to retain workers in the oilfield service sector, as well as an incentive program for restarting well production when market conditions become favorable once again.

“Shutting in wells comes at a large cost and substantial risk to operators,” Ness said. “Potential use of federal stimulus funds toward alleviating that risk would be extremely welcome by operators as they determine which shale development assets to restart.”

Hulsey, meanwhile, disputed the idea that shutting in wells is all that risky.

“As the largest Bakken producer, Continental has not experienced any type of reservoir or production damage as a result of curtailing production,” he said. “Production interruptions are in the normal scope of business across the basin and occur often with no evidence of significant production damage.”

There was one point where Hulsey and Ness both agreed, nearly word for word. Both suggested in their testimony that NDIC should conduct a cost-benefit analysis of its existing regulations and fees, to identify those that are not substantially improving health and safety.

“At this critical time, we must look at what makes regulatory sense in all aspects of the industry, from exploration and production to transportation and refining,” Ness said, adding, “In this crucial time, North Dakota can establish the Bakken as the top basin for companies that want to put capital back to work.”