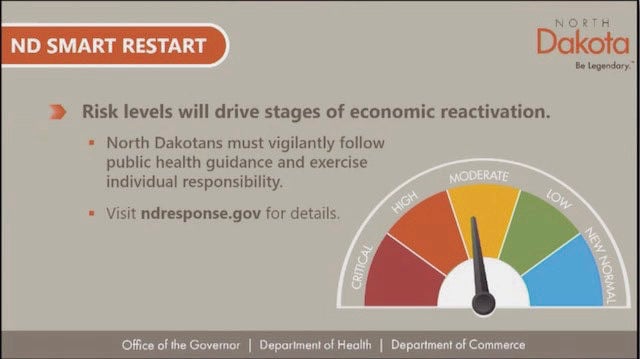 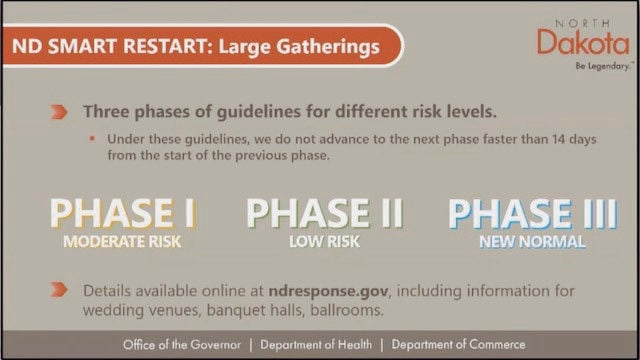 Right now, the state has entered Phase 1 or the moderate risk category. This comes with new, voluntary protocols for large gatherings, including weddings, which are posted in their entirety at state’s COVID-19 website, ndresponse.gov.

Among the suggested guidelines, Burgum said, is reduced occupancy of up to 50 percent of the venue’s original space, capped at 250 people.

Social distancing is still recommended, Burgum said, as are separated entry and exit points, so people are not facing each other as they go in and out of a venue.

Contactless payment systems are recommended, along with touch-less faucets and doors.

Burgum amended his executive orders for musical and sporting events to strongly encourage adoption of the new guidelines, but stressed the protocols he is releasing are voluntary.

While some may question the efficacy of voluntary guidelines, Burgum believes there is a strong appetite for adoption within the state.

“We know there is a strong demand (for these protocols),” the governor said. “These guys care about the safety of their employees and the individuals attending their events.”

Customers themselves do retain the right to choose where they will go, Burgum pointed out, be it for personal care services, a restaurant for dinner, or other venue such as a music concert. He believes that will drive most venues to choose safe protocols, so that guests feel comfortable enough to attend.

Burgum also acknowledged that if there is even one asymptomatic person with COVID-19 at a large gathering, it could result in a large number of people getting coronavirus, but he said, it is impossible to eliminate all risk, and is not the goal.

The state’s goal is to balance the existing risk and manage it in a smart way. Newly developed testing and contact tracing abilities should allow the state to ease some of its restrictions, so that life can proceed toward a new, if different, normal.

“Let’s be supportive of anyone choosing to wear a mask,” Burgum said. “That can help protect them and their loved ones.”

The protocols for large gatherings were developed by more than a dozen business and industry representatives, Burgum said. They balance the importance of controlling the spread of COVID-19 with the ability to proceed safely with events.

“We strongly encourage venues to follow them,” Burgum said. “They were developed by your peers.”

While the positive test rate and active case numbers continue to decline for the state overall, 83 percent of the state’s new cases reported on Friday were all in one community, Cass County, which has 428 of the state’s 648 active cases.

Burgum said a majority of new testing will zero in on that area, although tests throughout the state will also continue.