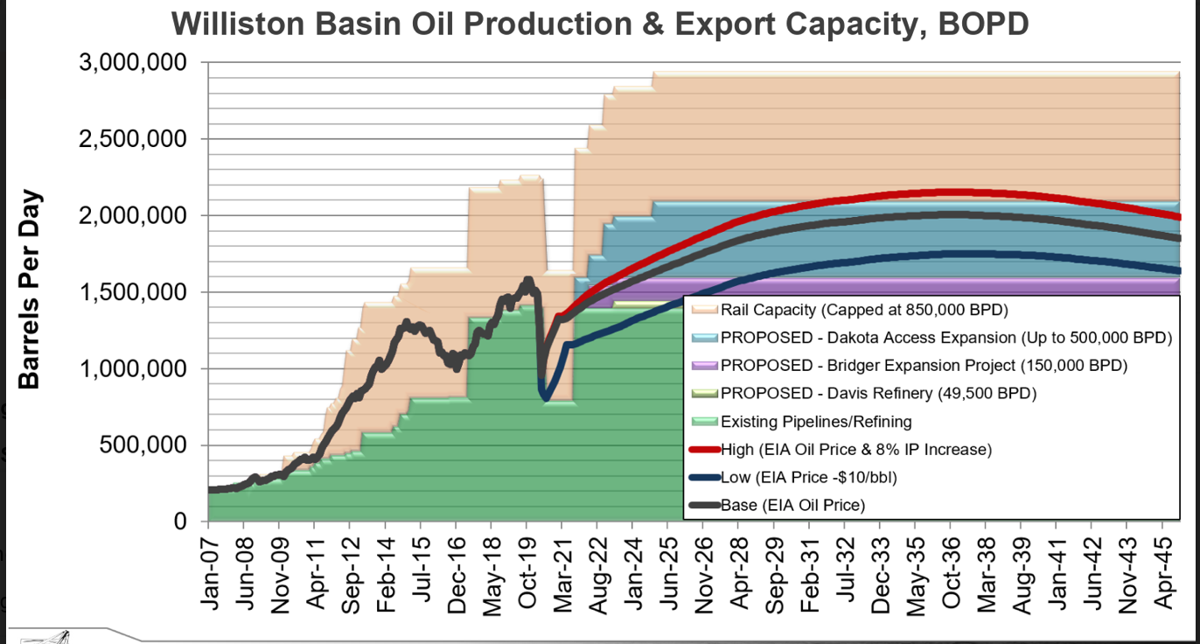 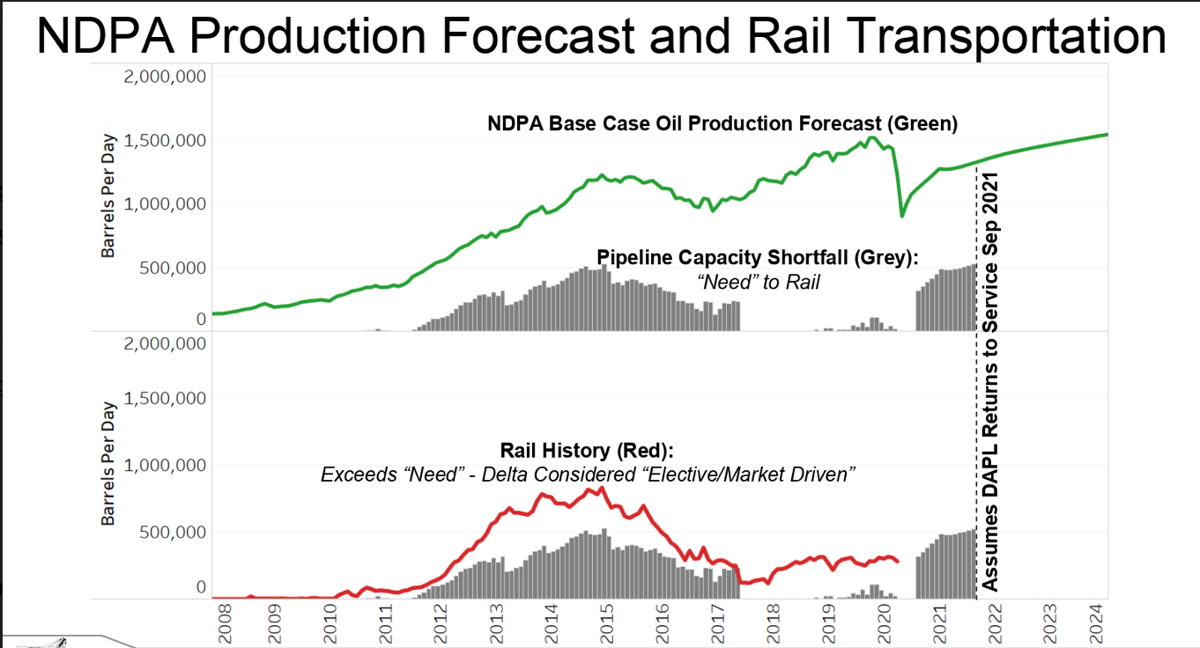 Graphic showing the estimated amount of oil North Dakota's oil and gas industry will need to send by rail if Dakota Access has to shut down while more environmental study is conducted.

Graphic showing the estimated amount of oil North Dakota's oil and gas industry will need to send by rail if Dakota Access has to shut down while more environmental study is conducted.

Without the Dakota Access pipeline, North Dakota’s new upper limit on production is about 1.1 million barrels of oil per day, according to figures from North Dakota’s Pipeline Authority, Justin Kringstad.

That 1.1 million barrels per day upper limit assumes that existing open space on the Enbridge, True Companies, and Kinder Morgan pipeline systems are all filled and that they are able to continue operating without disruption.

Rail systems, Kringstad said, have been taking about 300,000 barrels of oil per day to markets on the east and west coasts.

To get to his forecast for 1.3 million by next summer, rail would need to transport an additional 200,000 barrels per day.

“As of today, there are 11 facilities capable of loading crude,” he added. “Many of them are still able to do that and are just sitting idle.”

The larger problem, however, is the economics of the situation, and whether the market can stand for North Dakota’s newly disadvantaged transportation following a federal judge’s ruling that the Dakota Access pipeline must cease caring 570,000 barrels through it by Aug. 5, while it undergoes a more extensive environmental review.

Dakota Access is appealing the decision, and has filed for a stay. That request, as a matter of routine, went first to the judge issuing it, Judge James Boasberg, who rejected it. That goes next to the Court of Appeals.

Emptying the pipeline will take longer than 30 days, North Dakota Petroleum Council President Ron Ness told the Williston Herald on Wednesday, July 8. The pace of oil moving on the line is a brisk walk. That’s three weeks from the Bakken to Patoka, Illinois.

In 2014 the Bakken moved 14 to 15 trains carrying 800,000 barrels of crude oil per day, but today’s market is very different, Gov. Doug Burgum pointed out. Prices then hovered in the $80 range. Companies could withstand all the extra costs associated with moving oil by truck or rail. Those associated costs don’t only include direct shipping costs, but also things like loading and unloading the oil.

Prices are just beginning to teeter over the $40 threshold in a recovery many analysts are suggesting is tentative at best. Coronavirus cases continue to rise across the nation in states like Texas and California. They are rising in some places around the world as well, such as in Australia, Brazil, and Singapore.

“If we are at $40 and have existing discounts and then throw another $5 on top of that, you are pushing a bunch of production right now in North Dakota out of economic value,” Burgum said. “We might continue to see production shut in and wells shut in and activity not resume.”

Burgum said it is a “tipping point” that could constrain production in North Dakota. It’s not just the same volume of oil moving at $5 less per barrel.

“(This is) where the volume goes away, and then it is devastating,” he said.

North Dakota has always been geographically disadvantaged due to its distance to market, Kringstad added.

“We are compounding that in the current environment,” he said. “We are adding $5 to a price that was already challenging to compete with the Permian and other places.”

Department of Mineral Resources Director Lynn Helms suggested the situation could prompt shifts in capital to the Permian. While those shifts might initially be framed as temporary, large swings in capital tend to have momentum.

“The impacts to North Dakota are immediate and severe,” Helms said. “And they are also very long lasting.”

“All those conversations are off right now,” Burgum said. “So this is a significant setback, and we need to again really crunch the numbers and tell our story in a way that it is understood that while there may be theoretical alternatives to being able to transport this, those theoretical alternatives cost so much that the production never occurs in the first place. Then it is purely theoretical and the economic impact is massive.”

As appeals move forward, Attorney General Wayne Stenehjem said it is imperative the state make clear to the appeals court the true extent of the economic impact, which includes not just the state’s industry, but its schools, roads, water projects, health care, and all the other things funded by oil and gas tax revenues.

“I don’t think (Judge James Boasberg) fully appreciated the extent of the economic devastation to our economy and to our citizens,” he said.

Burgum said the case also poses broader questions for the nation as a whole. Dakota Access had obtained all the permits federal agencies required of it, and had been operating safely for three years.

“I don’t know how you raise a dime for a project ever again,” Burgum said.

Meanwhile, the nation as a whole has thousands of miles of aging pipelines that need to be updated with newer, safer pipelines.

“We have infrastructure built in the 50s, 60s and 70s that maybe should be under more scrutiny, but it is odd that the one that is being scrutinized the most is the one that is the most modern,” he said.

Shutting down oil and gas production in states like North Dakota, a stated goal of some keep-it-in-the-ground environmental groups, is “a gift” to foreign competitors, Burgum said.

“Which as we know has been one of the drivers of all of our military spending the last 40 years,” he said. “Trying to protect foreign oil production, so, when you follow the logic down, it makes no sense whatsoever.”