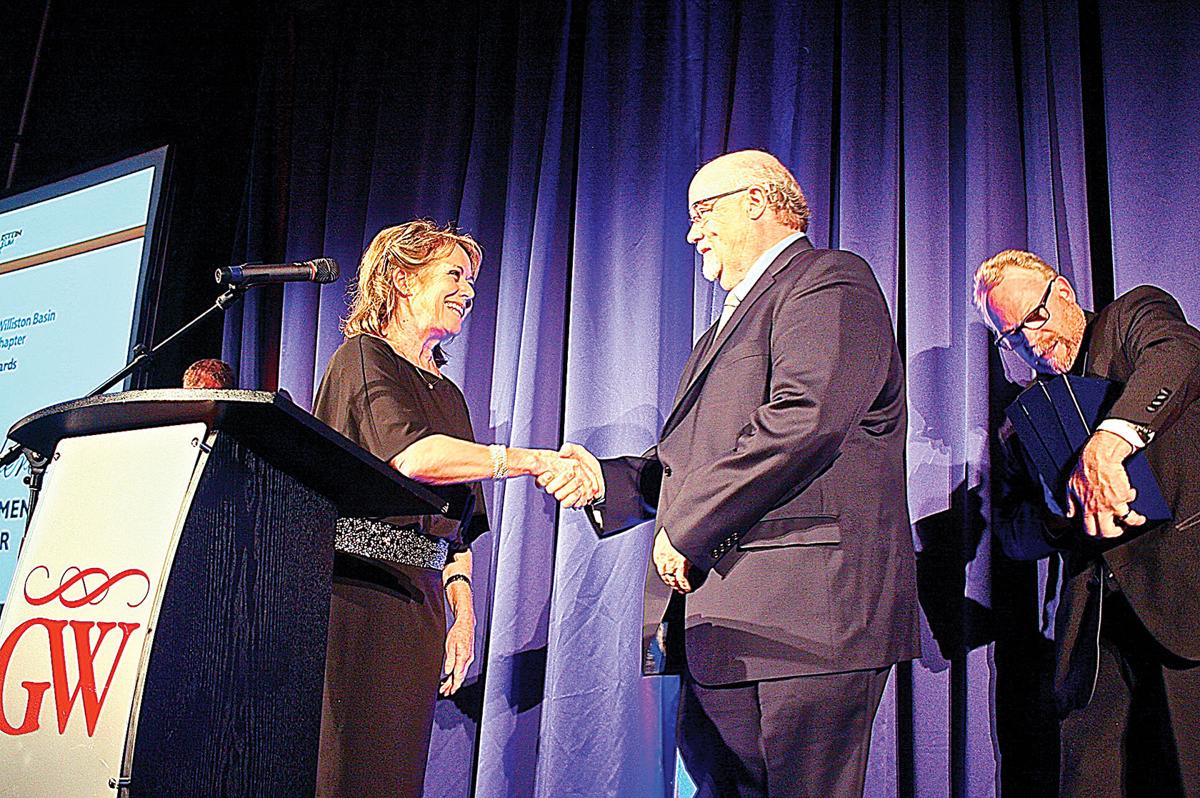 Kathy Neset, left, shakes hands with Wayne Biberdorf after presenting him with a Lifetime Achievement award during the Williston Basin Chapter of the American Petroleum Institute's 2017 awards banquet Friday night. 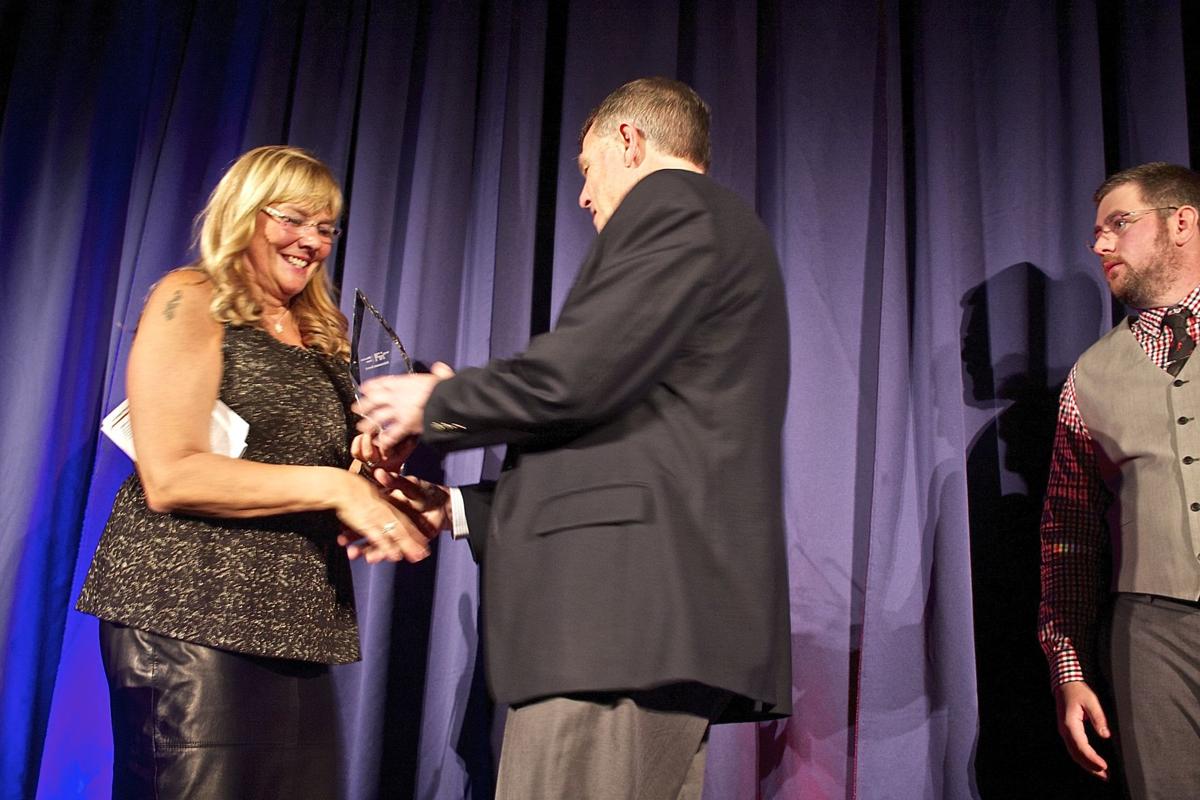 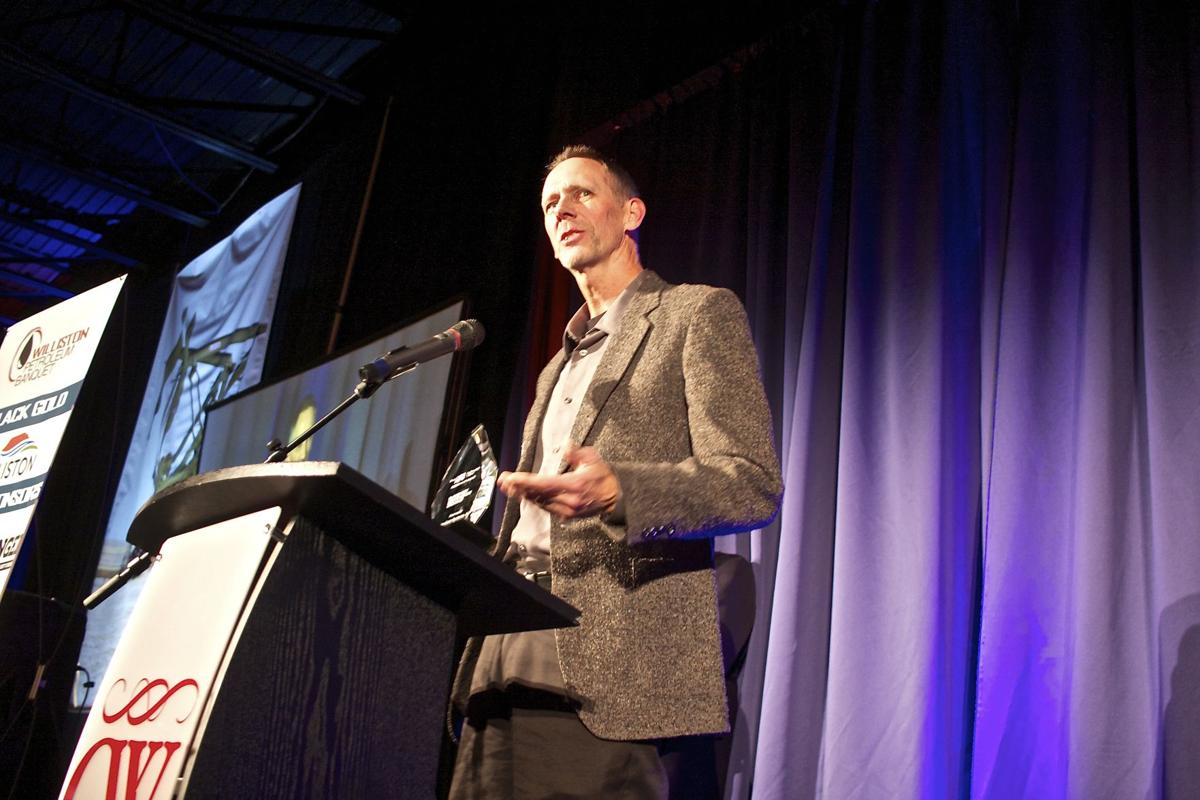 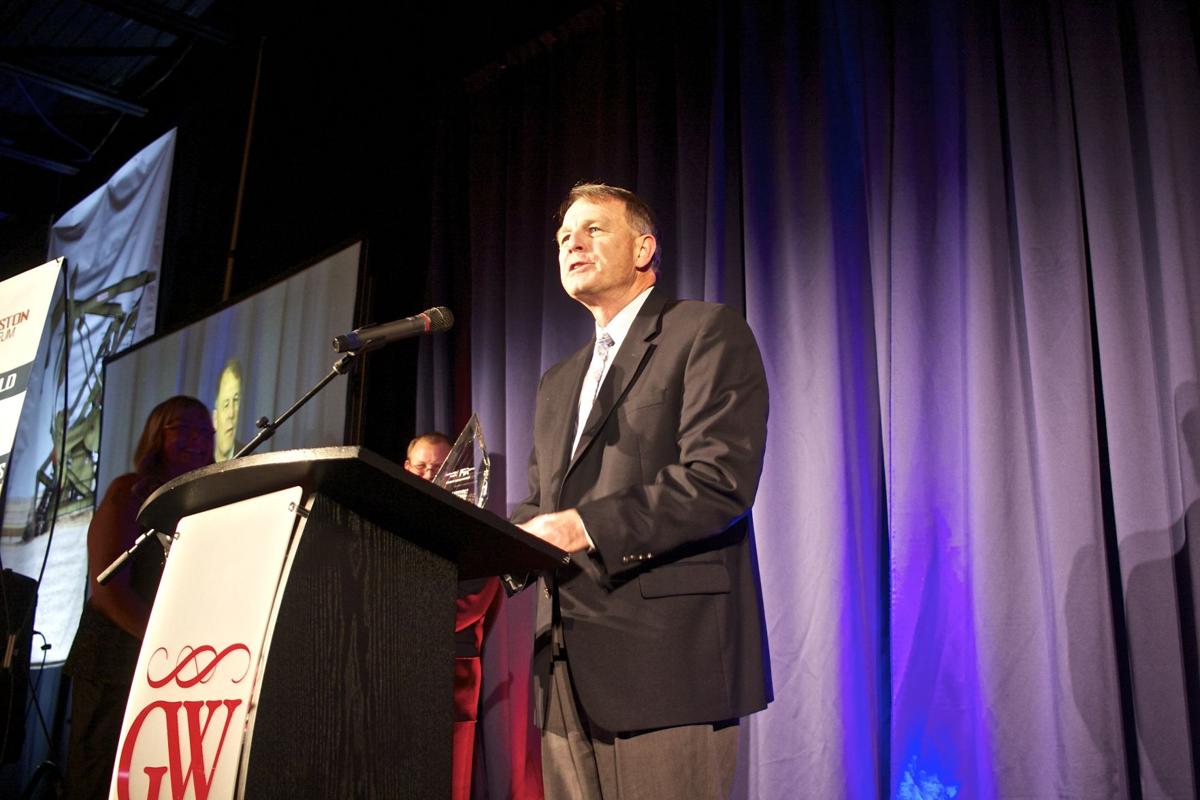 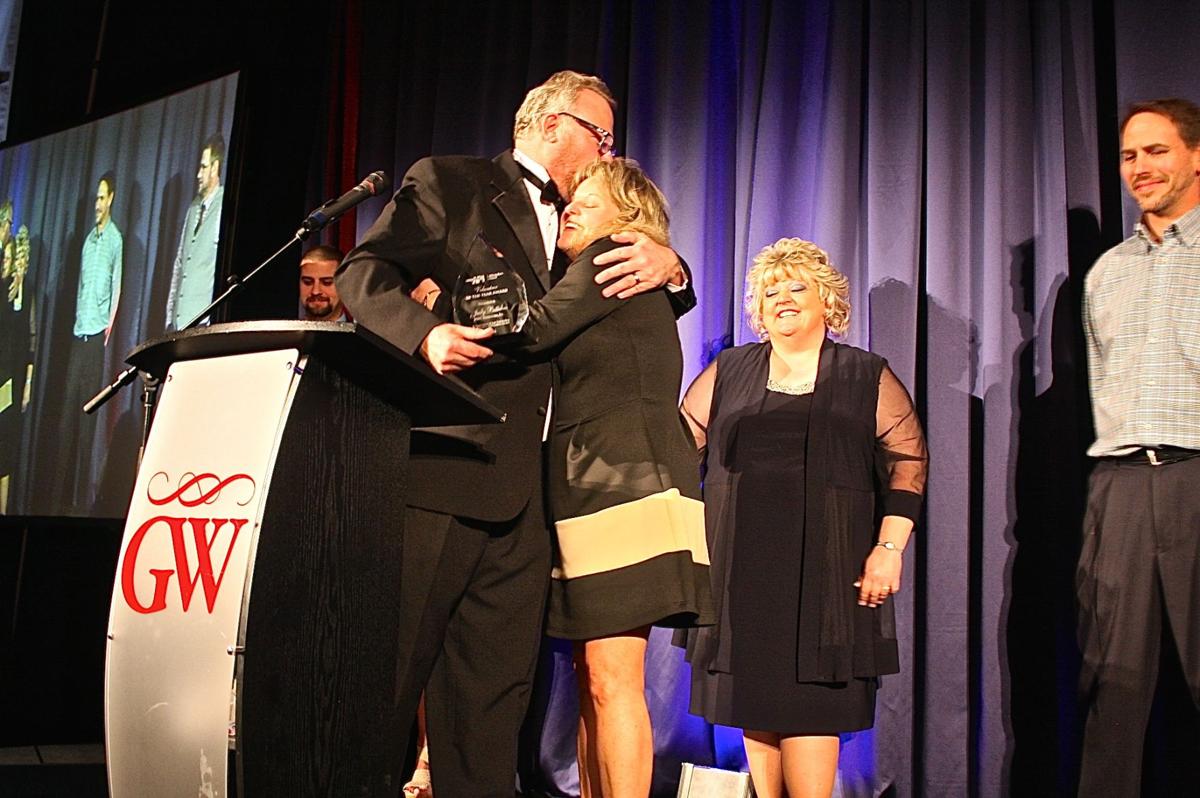 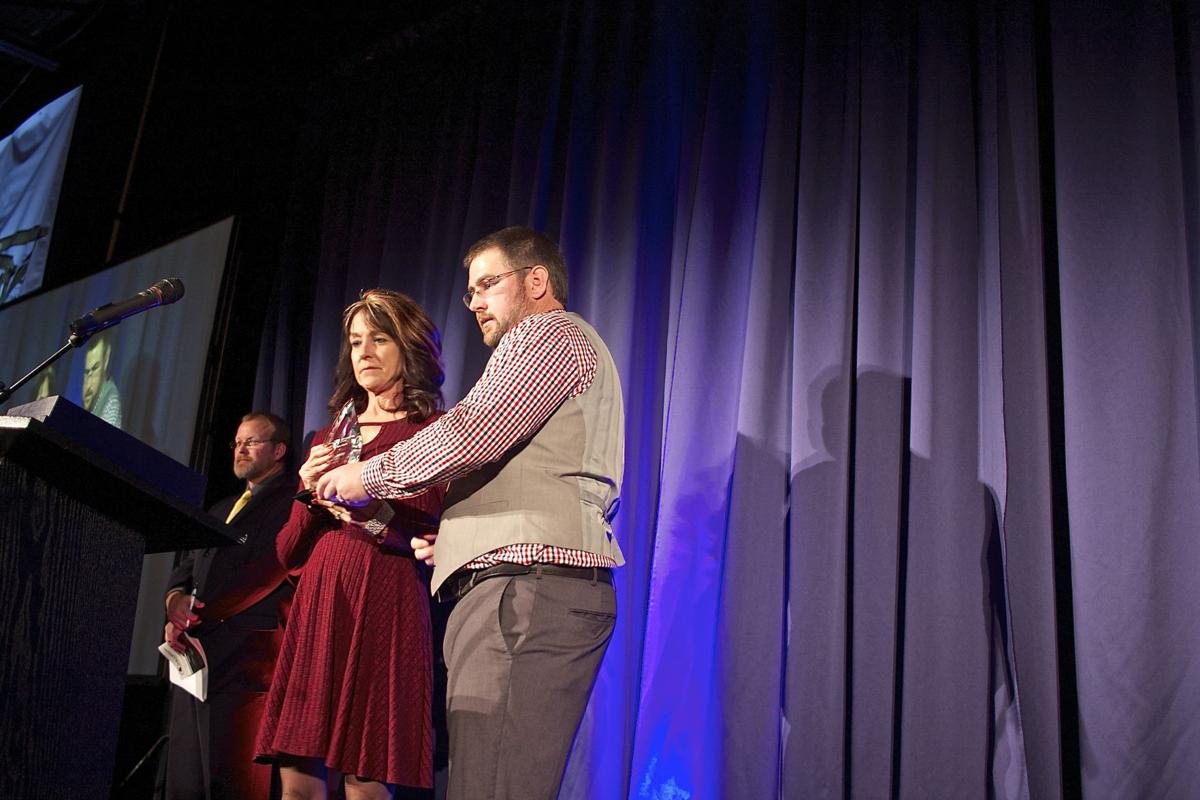 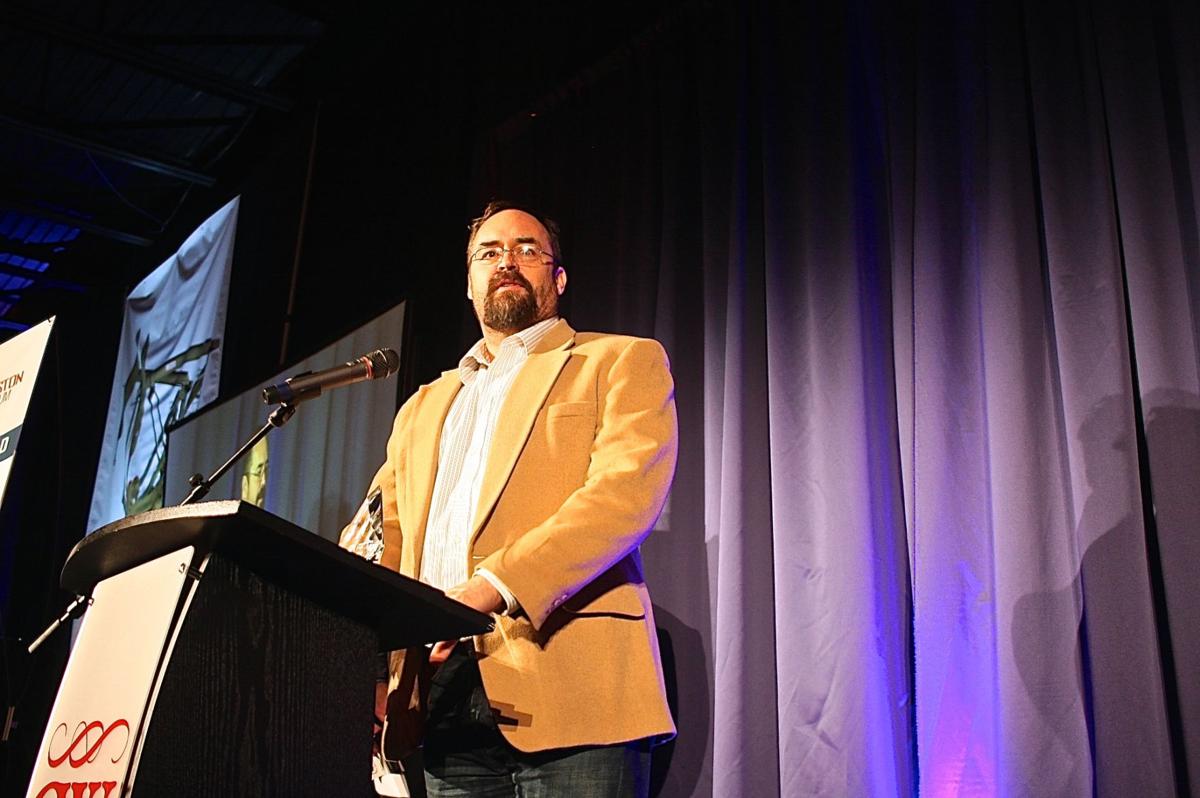 Kathy Neset, left, shakes hands with Wayne Biberdorf after presenting him with a Lifetime Achievement award during the Williston Basin Chapter of the American Petroleum Institute's 2017 awards banquet Friday night.

Wayne Biberdorf, who was most recently the state’s oil impact coordinator, was the Williston Basin Chapter of the American Petroleum Institute’s 2017 selection for a Lifetime Achievement award. The honor was presented during the association’s annual awards banquet Friday night, along with a host of other awards and recognitions. Rep. Kevin Cramer, who has long been a champion of national energy security, was the event’s keynote speaker.

Biberdorf, in accepting the award, struck a humble note.

“I am very impressed with how much the API chapter here has grown,” he said. “And just looking at all the contributions back to the community — you all are doing a fabulous job.”

Biberdorf was referring to a set of slides in a projected presentation that showed hundreds of awards to various organizations in the community. API has also raised hundreds of thousands of dollars to establish scholarships at Montana Tech and Williston State College.

Biberdorf also added that his wife, Jean, deserves a lot of credit.

“As all of you know in the oilfield, it’s not an 8-to-5 job, so a lot of support is needed there,” he said. “We are living in Billings right now, but Williston and the Williston Basin will always be my home.”

Neset was not low-key in her praise of Biberdorf as she was presenting the award.

“It’s an absolute thrill to be here and to share this award,” she said. “When you say lifetime achievement award winner, that goes to an individual who has dedicated their lifetime to our industry. And I’m absolutely thrilled by that. Not only do we end up with an individual who has done so much good, it sets something for the next generation to aspire to. I want the young people here to look at him and know what a great job he has done.”

Biberdorf has degrees in both math and physics from Minot State University, and an engineering degree from  University of North Dakota. He started out teaching, but took a job with Hess in the 1980s, ultimately working for them for 30 years, until he retired in 2010.

That was just as the boom was taking off in North Dakota, however, and Biberdorf’s blend of talents and experience were needed by the state. Gov. Jack Dalrymple appointed him as Energy Impact Coordinator in 2012 to improve coordination between western North Dakota and the Capitol and its state agencies. He retired from that position a year later, but played a pivotal role in that time.

He also served for a time on the board of directors for the North Dakota Petroleum Council, and on the Workforce Advisory Board and the North Dakota Training Board. Then Gov. John Hoeven, now a U.S. Senator, also appointed him as the first chairman of the Oil and Gas Research Council.

The Bottineau native is the seventh inductee of the North Dakota Petroleum Council, Neset went on to say, and quoted John Morrison in his induction speech.

“(Wayne) has contributed significantly to the functions and activities of the associations representing the oil and gas industry in North Dakota, and supported the promotion and development of the industry through hard work on behalf of the membership, commitment to the wellbeing of the industry, and participation in association activities. He is certainly deserving of our association’s highest honor.”

Neset paused for a moment then said, “Wayne, tonight, we are going to award you another highest honor.”

Other awards given during the event included:

Rob Harrison — 2017 Volunteer of the Year, accepted by Mike Carter. It’s the second year in a row a Liberty Oil employee was recognized with the award. “It means a great deal to Liberty to get this award for the second year in a row,” Carter said. “This is all due to the great work that API puts on and the benefits they give out to the community. It is a real honor that we are able to be part of it and have partnership that support these things to really be part of the community.”

FlowCore — Industry Innovation, for development of a freshwater management and chemical injection system that replaces mechanical pumping systems with an automated system. FlowCore is a Wililston-based company with Williston-based investors, managers and staff, but has the potential to serve the entire oil and gas industry.

W.W. Grainger — Community Service, for its strong presence on a variety of causes, including March of Dimes, Bras for a Cause and the Williston State College Endowment. In addition to monetary donations, the company has been generous with silent auction items, as well as gloves and bags for the Williston Cleanup Day.

Energy Transfer Partners — Outstanding Achievement, group, for construction of the Dakota Access Pipeline, a game changer for the Bakken oil and gas industry, that is helping Bakken crude get to the markets where it can get the best price. The pipeline has already eased the discount against Bakken crude by $2, bringing in more tax revenue for the state and more royalties for mineral rights owners.

John McCreary — Outstanding Achievement, individual, for his stewardship of JMAC, which he purchased in 2008. The company at first experienced rapid growth, then went through a severe downturn. JMAC has weathered the storm and grown to more than 500 employees, all while maintaining an active role in the Williston community.