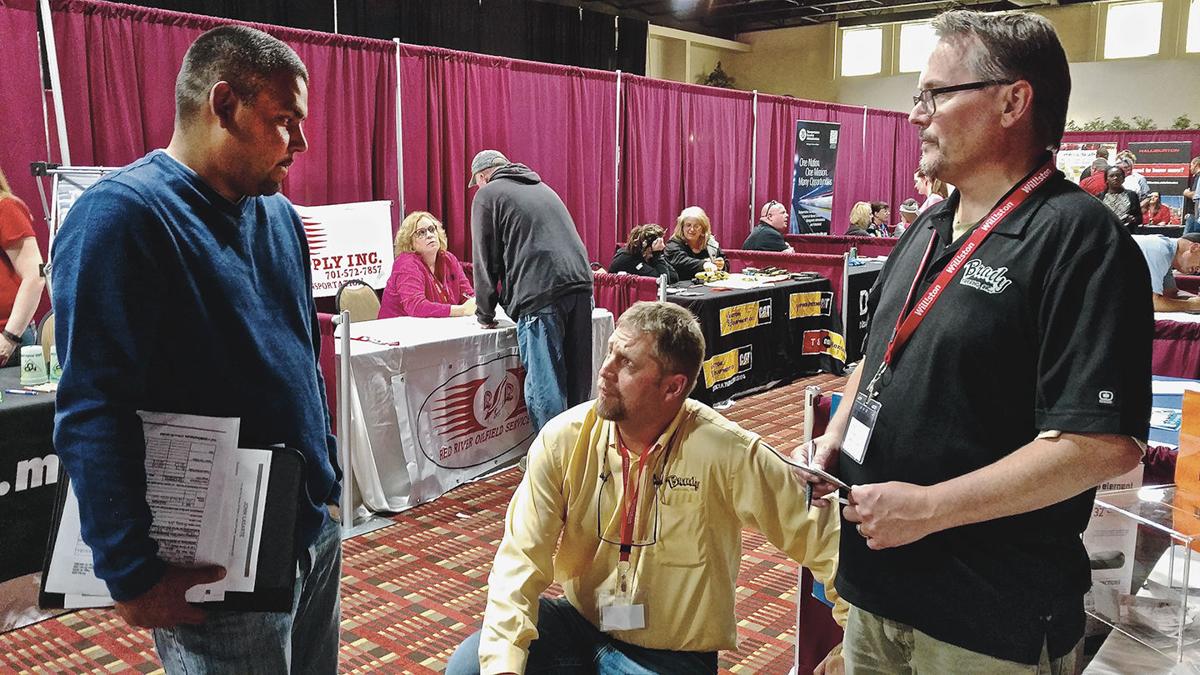 Brady Trucking's Bob Bucklin, center, and Jason Crowell, far right, talk to a prospective employee during the Job Fair at the Grand Williston. The company has about 15 positions open for CDL drivers to deliver frac sand. Download permissions 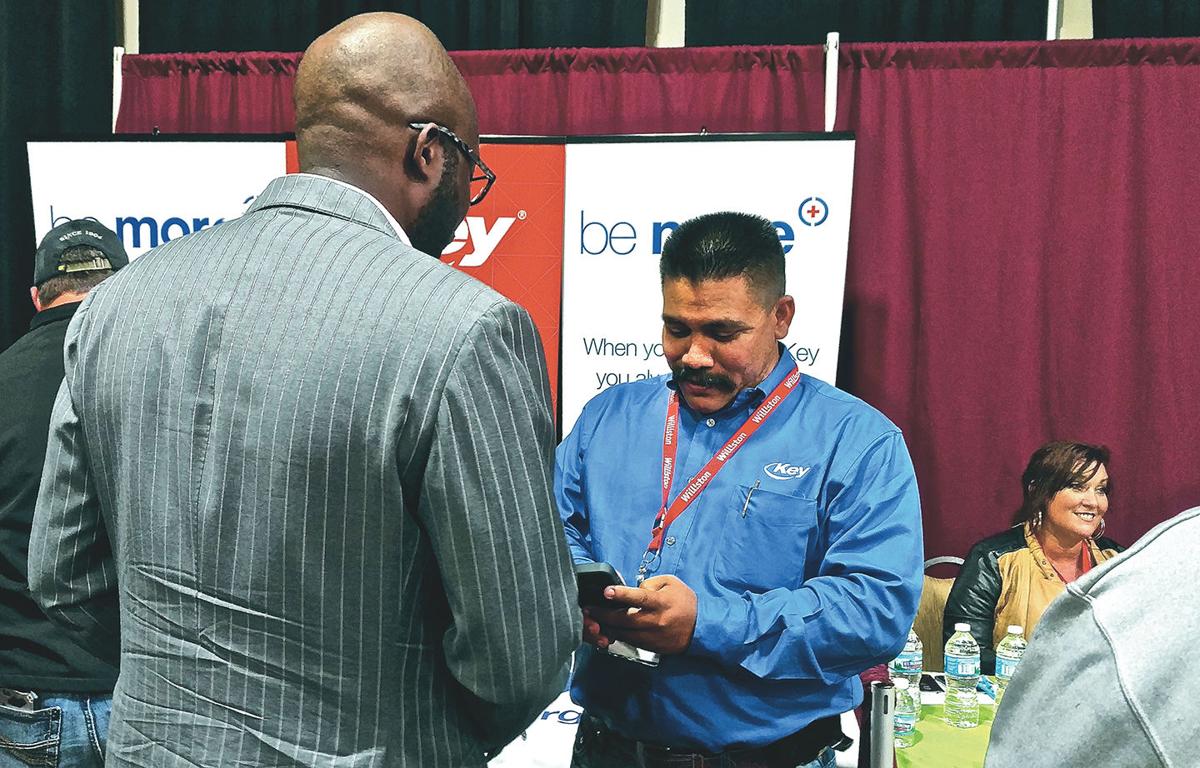 Samuel Gonzalez (right) with Key Energy Services talks with a prospective employee about opportunities the company offers. It's Bakken headquarters is in Williston, but it also has an office in Sidney. It's looking to expand both operations. Download permissions

Brady Trucking's Bob Bucklin, center, and Jason Crowell, far right, talk to a prospective employee during the Job Fair at the Grand Williston. The company has about 15 positions open for CDL drivers to deliver frac sand. Download permissions

Samuel Gonzalez (right) with Key Energy Services talks with a prospective employee about opportunities the company offers. It's Bakken headquarters is in Williston, but it also has an office in Sidney. It's looking to expand both operations. Download permissions

“The darkest part is past,” suggested Samuel Gonzalez, director of recruiting for Key Energy Services. “And we are hiring for floor hands, derrick hands and rig operators in the well-servicing industry.”

Key Energy has offices in both Williston and Sidney, and their workload has been picking up. Williston is their Bakken headquarters, but the company is looking to grow both operations.

Gonzalez came to the Job Fair from Midland, Texas. He had spoken to 50 prospective applicants, 20 of whom were experienced candidates, in the first hour of the event. More than 800 people attended the event on Thursday at the Grand Williston, put on by the Williston Job Services ND office. The event included job listings from throughout the Bakken and scattered oil patches beyond.

“We’re about an hour in, so that is good, really good,” he said. “Job Services puts the word out, and they get candidates to the event. That is what I like about it, and why we take the expense to come and sign up for this.”

Gonzalez has a particularly good selling point for applicants. He himself started at Key Energy 11 years ago as a floor hand.

“This is a company that really loves to promote from within,” he said. “I started out as a floor hand, and 11 years later I was able to make director.”

Casey Spillman with Piceance Well Service, meanwhile, had 10 to 20 positions, including workover rig positions, to offer.

“We are willing to train, but looking for experience,” he said, then quickly repeated, “We are more than happy to train.”

Work for Piceance company has been picking up over the past six months, but he expects things will take off slowly or remain flat long-term.

“It’s the end of the year, and companies want to spend their budgets for the year,” he suggested. “They have wells to work on.”

Adler Hot Oil had about 30 positions it was hiring for company-wide, 10 of them in the Bakken.

“We’re going into our busy time,” Doug Arnold said. He is regional sales manager for the company and drove up for the event from Dickinson. “We are a heating company. We heat water for fracs and the hot oil service, so when it gets cold, we are needed more.”

Bottom of the downturn passed

Many companies at the job fair feel they saw the bottom of the downturn sometime in January. Of course, they pointed out, much depends on a variety of factors beyond anyone’s control, some of them geopolitical. Many company representatives referred back to a $20 million dollar question no one can yet answer.

What will Saudi Arabia — and thus OPEC — do about Iran’s promise to ramp up production to previous levels?

Supply is already at record levels. Oil tanks in the Bakken are full. The supply glut must be dealt with. On the other hand, technology is improving all the time, lowering price points, changing the break-even and the game for tight oil plays. Where that lands, no one knows yet.

There were other questions on the minds of oil companies, too. Who will win the presidency? What about new technology in other energy sectors like wind and solar? What’s the long-term effect of all that on outlook?

Most of the companies said they hoped to snap up better than average employees, many of whom have been under-employed due to the downturn. Among these was MBI Energy Services.

They successfully navigated the downturn by being a fairly diversified company in the first place, and now that they see the workload increasing, they are looking to get staffed up for jobs that they know are coming down the line in the not-too-distant future. If they can capture a share of better-skilled employees now, they’ll be better positioned to take advantage of the upswing when it hits.

Bobby Jones and Miles Ryan said that effort seemed to be working out well so far.

“There were some tire kickers, too, seeing what is out there,” Ryan said. “But overall, it’s good. We had a few really good applicants, so we are coming away with good hires out of this.”

One thing that wasn’t in as much evidence at the job fair were all the housing and other perks — but you could still find a few if you were really looking, particularly for high-demand jobs.

Nuverra, for example, is looking to hire 30 Class A CDL drivers with tanker endorsements and two years experience — the highest demand job at the fair. Nuverra has housing and can offer it at a discounted rate to employees.

Vernette Torgerson said the event had been very successful for Nuverra.

“We had a lot of talent here today,” she said. “This is definitely one of the better job fairs to attend. It’s well-organized, it’s well-advertised, and it draws a quality

Still, she didn’t get all the applicants Nuverra needed.

“We will have to keep looking, keep going to job fairs,” she said.

A wide range of other job sectors were also represented, many of them offering above average wages and touting training and other benefits.

“We had 60 employers with more than 300 jobs,” Cindy Sanford said. She is Job Services ND’s Williston office manager. “Overall, the employers are saying it was a strong candidate base, but we need more people. In capital letters, MORE PEOPLE.”

Despite what some national media reports have suggested, many sectors besides oil and gas have continued to grow in the Bakken area, and job postings, while not as high as before, are still substantially outpacing available labor. That has been keeping unemployment low, and helping laid off oil workers who decided they want to stay in the Bakken find alternatives.

“We are continuing to see growth in all areas,” Sanford said. “Health care, retail — retail is getting ready for Christmas. And another thing we saw at the job fair this time that we haven’t seen before is part-time jobs. And we also had a lot of people looking for part-time jobs.”

Those who missed the job fair Wednesday are not completely out of luck. Many of the companies indicated they would be continuing to take applications after the job fair was over, and none said they’d hired all that they expect to need as oil continues to inch at a snail’s pace to a recovery.