A front-end loader works to stop a fire in a field near Stanley on Thursday, April 1. Gov. Doug Burgum declared an emergency this week in response to another fire in Billings County.

Gov. Doug Burgum declared a statewide emergency and Medora was evacuated this week in response to a wildfire in Billings County.

All but four of the state’s 53 counties have some kind of burn ban or restriction in place. Low relative humidity, dry conditions and strong winds led to a Red Flag warning on Friday, April 2, from 1 p.m. to 7 p.m. CT.

The Williams County Commission approved an automatic burn ban in March, meaning whenever the fire danger index is in the high, very high, or extreme status or a Red Flag Warning has been issued for Williams County. The ban is in effect through the end of the year.

It includes the the ignition of fireworks, garbage burning, campfires, burning of farm or crop land, and unnecessary off-road motorized travel.

Burning will be allowed when there is a low or moderate fire danger rating or with approval of the local fire response authority.

About 47% of the state is currently listed as in extreme drought.

The U.S. Drought Monitor lists common effects of severe drought. They include:

Soil moisture is low; pasture and rangeland is dry; crop conditions are poor; hay yields are low; cattle are sold

Fertilizer sales are low at elevators

Some common effects of extreme drought include:

The state offers a list of things the general public can do to help decrease the risk of wildfires during dry conditions:

Restrict burning to early morning and late evening hours when typically winds are lower and humidity is higher.

Extinguish and discard smoking materials appropriately, not from a vehicle.

Williston and its leaders will be featured on an upcoming episode of “Information Matrix” hosted by Laurence Fishburne.

In a segment scheduled for April 26, the award-winning program will show how Williston tripled in size due to the shale oil boom in the Williston Basin, with city leaders speaking on the growth, business, and workforce opportunities in their community. Williston has been named the fastest growing micropolitan in the last few years due to an influx of residents coming to work in the area due to the oil industry.

“Information Matrix” is a program that tackles stories and concepts that are influencing our modern-day society. Each episode breaks down things happening in today’s society, culture, and business through a long-form documentary presentation. Shared by a diverse audience, “Information Matrix” is a leading television series focusing on society, education, and industries.

“We are looking forward to the national exposure we will receive from “Information Matrix,” said Wenko. “Our segment will showcase the many opportunities available here in Williston.”

A promo for the episode will begin airing April 1 at approximately 7:15 p.m. on the Fox Business Network. The commercials will air throughout the month on a variety of cable networks. The actual segment will be distributed to over 200 Public Television stations on April 26. The stations will have the rights to air the segment for one year.

“This is a way to present Williston in a positive light after many, and often unwarranted, negative posts and representations over the past 10 years,” Mayor Howard Klug told the Williston Herald. “It also helps with economic development as it shows Williston as a vibrant community.”

Oil_and_energy
featured
Staring down the barrel of a Biden administration, one oil and gas organization makes an eye-brow raising proposal
Facebook / The White House/TownNews.com Content Exchange

President Joe Biden signs legislation in the Oval Office at the White House.

Staring down the barrel of a Biden administration, the American Petroleum Institute recently unveiled what it called a “middle of the road” strategy for mitigating climate change in a world that’s still going to continue to need a viable oil and gas industry well into the future.

Energy demands have been projected to grow 50 percent by 2050, according to figures from the Energy Information Administration. T he International Energy Agency, meanwhile, projects that even if every country meets goals under the Paris Climate Accord, oil and gas will still be 46 percent of that increased energy mix in 2040.

That means oil and gas will be around for a long time, API President and CEO Mike Sommers said, but it doesn’t mean the industry can’t continue to make enormous strides when it comes to climate change.

“America has made significant progress in reducing emissions to generational lows, but there’s more work to do, and there’s nobody better equipped to drive further progress than the people who solve some of the world’s toughest energy problems every day,” he said. “As our industry accelerates efforts to advance groundbreaking technologies, reduce emissions and drive transparent and consistent climate reporting, we urge lawmakers to support market-based policies that foster innovation.”

Among the market-based policies API proposed, however, is a buzzword that certainly raises eyebrows in the oil and gas sector. Namely, carbon pricing.

“Let’s be clear. A price on carbon is a tax on energy,” said American Energy Alliance President Thomas Pyle, in a statement reacting to its inclusion in API’s proposed action plan. “A national energy tax is an easy position for big, multinational companies to embrace because it gives the federal government what it wants (more tax revenue); attempts to appease the greens (it won’t); and compels customers to pay more in taxes to the federal government in the false hope of avoiding additional future regulations (the progressives have already ruled this out). Those who are left out of the conversation are consumers, small businesses, the poor, seniors, and those on fixed incomes — basically everyone.”

But national organizations weren’t the only groups to pan the idea. North Dakota entities representing oil and gas interests had a similar reaction.

“NDPC is concerned that any government intervention into the marketplace for carbon or any other mechanism does not solve challenges and tends to only inflate costs for consumers while hurting the ability of America’s oil and natural gas producers to compete on a global scale,” NDPC President Ron Ness said. “We plan to engage, as we always have, in the regulatory process to ensure our voice is heard and attempt to educate our government leaders on how different proposals will impact our operations.”

“We are not ashamed of producing oil in North Dakota, or consuming it,” he added. “And we will continue to advocate for this industry that has improved lives all across the world and continues to provide economic opportunity for the citizens across our state.”

Geoff Simon, executive director of the Western Dakota Energy Association, which represents oil and gas producing counties in North Dakota, said carbon pricing is really just “virtue signaling,” and will drive up the costs of energy without doing anything meaningful for climate change.

“(It will cause) undue economic harm to American businesses, boosting their foreign competitors who incur no such penalty,” he said. “Higher energy prices also harm low income citizens the most, because they pay a disproportionate share of their income on energy.”

They are also potentially unfair to states that lie in harsher climates, like North Dakota, he added, where people consume more energy per capita than other part of the country.

Monte Besler, otherwise known as the Fracn8tr, is a member of the Williston Basin Chapter of the API. He sees these types of things as mostly political fanfare that is unlikely to bring real change.

“Reality is, little will change on these controversial issues, because full compliance is likely to have an immediate negative impact on everyone in the form of higher energy costs,” he said.

Sommer, meanwhile, said API is not advocating for a specific framework, or even a specific price. It wants to see a market-based approach that is transparent, and that eliminates duplicative regulations in the sector.

“A policy that we would not support is a government-first mandated approach,” he said. “But the other side says that we don’t need to do anything. What we’re pursuing here is what we think is the policy that is in the middle, and one that harnesses the power of markets to drive innovation,” he said. “That’s the main theme of the climate action framework we are unveiling today, which includes commitments that the API member companies are making to reduce emissions. It also includes government action that should be taken, and it has a key focus on innovation and technology, which is the only way that this country is going to meet the challenge of climate change.”

Sommers also said he sees a lot of room for common ground with the Biden administration in certain areas, among them, expansion of trade for American energy commodities like LNG.

“The debate in Washington has been bogged down by factions advocating for economic growth or environmental action,” Sommers said. “And the U.S. has proven over the last decade that we can do both. Drive down emissions, we can develop more energy and we can grow the economy.”

The API's complete Climate Action Plan is online at https://www.api.org/climate. 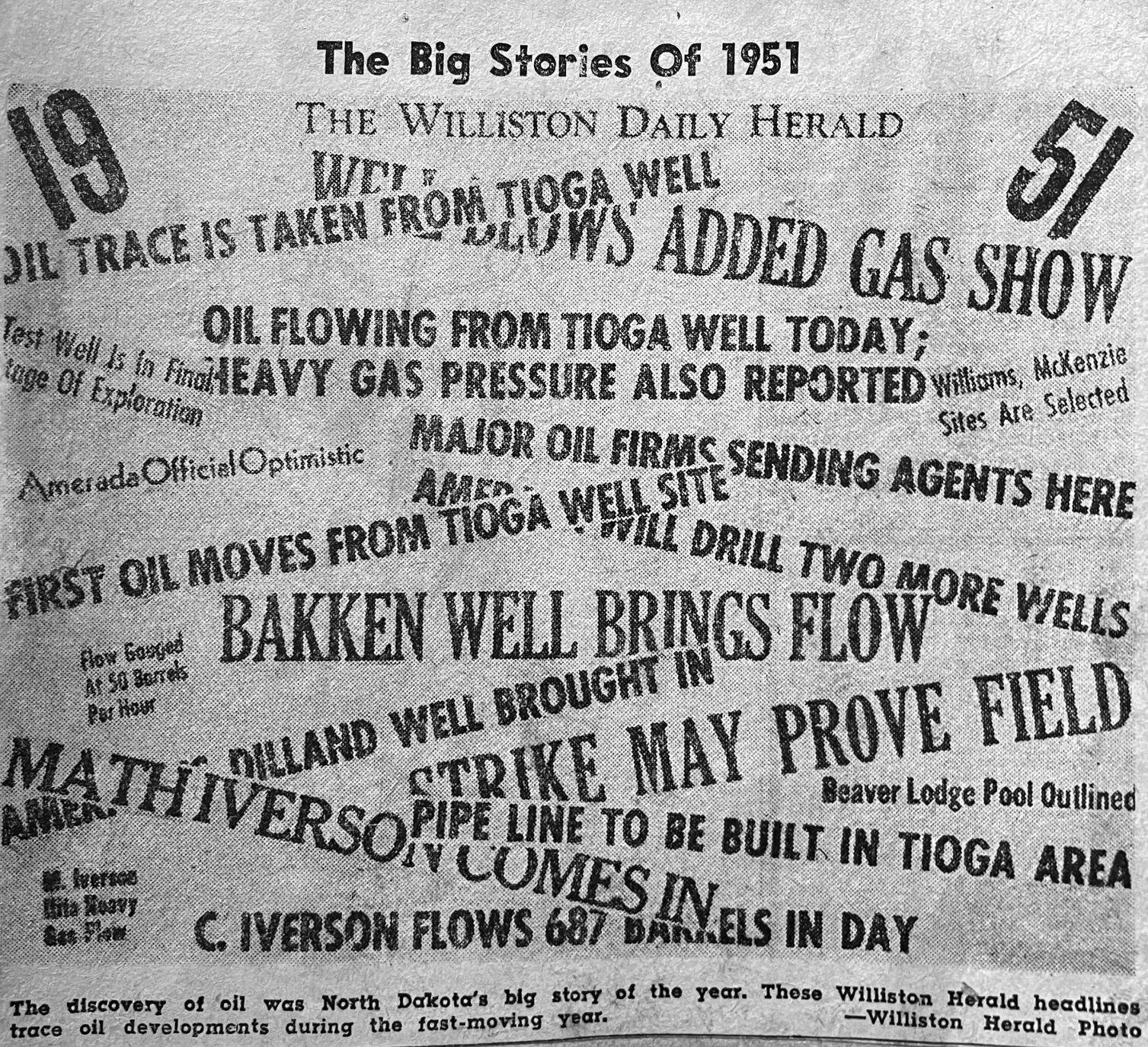 A collage of headlines from 1951 appeared in the April 3, 1952 edition of the Williston Herald, looking back at the discovery of oil in North Dakota. 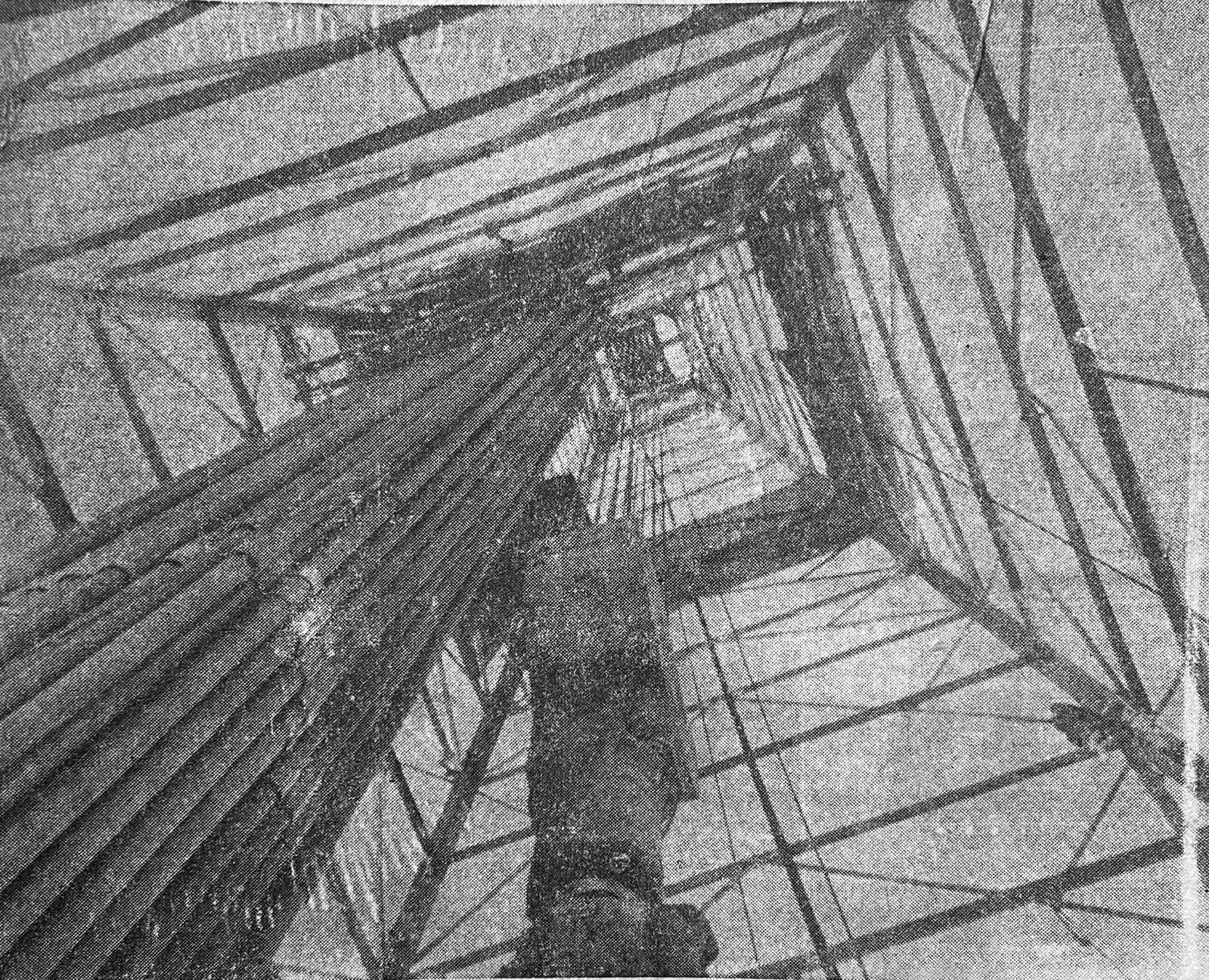 A photo published April 3, 1952 in the Williston Herald under the headline, “A Prairie Spiderweb,” gave readers a look upward into the structure of the rig that found oil in Tioga the previous year. The original caption reads: There is romance and beauty in the wildcatters life. The romance is the hope of fulfillment of new discoveries and conquests. The beauty is the outdoor life, the derrick painted against a fire-streaked sunset or primrose dawn, the voices of ancient gods speaking through the guttural roar of oil and gas belching from the bowels of the earth, the poetry of the motors’ rhythm and the whirl of the rotary table, the symmetry and perfection of design as shown in this picture of the discovery rig at the Clarence Iverson No. 1.

The Williston Area Chamber of Commerce announced that it will be bringing entrepreneurial program 1 Million Cups back to in-person meetings beginning Wednesday, April 7.

The program, organized by Williston Economic Development and the Chamber of Commerce, has been meeting virtually for nearly a year due to COVID-19. The first in-person 1 Million Cups will be hosted at Meg-A-Latte’s New Hope location at 8:30 a.m., with Lilac Lane owner Bre Staahl and Skin Win Dermatology founder Dr. Daniel Hoffman as the morning’s featured speakers.

“We are excited that 1 Million Cups is returning this month and we have a great lineup of entrepreneur presenters for all of our 2021 meetings,” Chamber President Rachel Richter-Lordemann told the Williston Herald. “After the challenges their businesses had to overcome over the past year, we can’t wait to hear their stories of success and give them opportunities to promote their businesses to the community.”