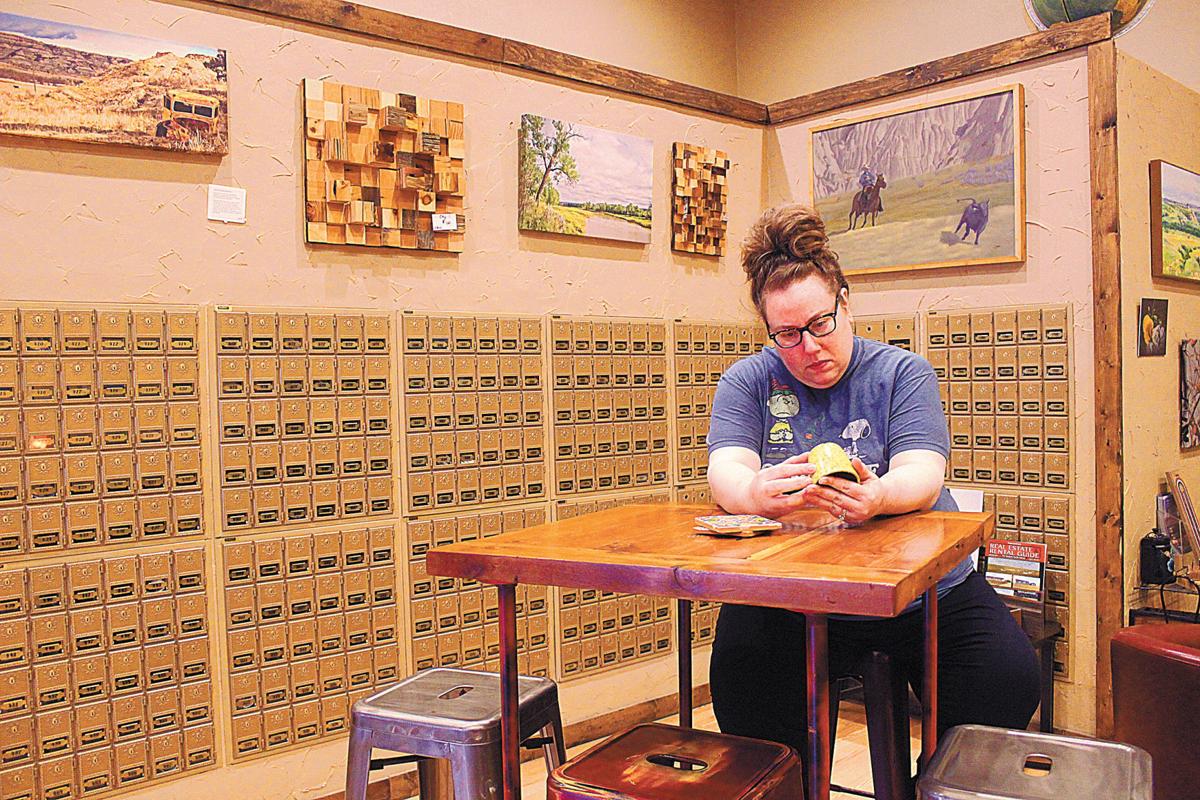 Amanda El-Dweek of Watford City, who draws the comic strip "Amanda the Great," takes a break at one of her favorite stops, Door 304, which is a coffee shop, a gallery, and a mail center.

Amanda El-Dweek of Watford City, who draws the comic strip "Amanda the Great," takes a break at one of her favorite stops, Door 304, which is a coffee shop, a gallery, and a mail center.

WATFORD CITY — As Amanda El-Dweek orders a drink from her favorite coffee shop, the woman behind the counter says she won’t forget the lid.

“From your comic strip, I know you like to cover your flavor,” the woman says, adding, “I’m getting to know your secret life.”

El-Dweek, of Watford City, draws the comic stip “Amanda the Great,” online at GoComics.com. The cartoon is light-hearted, focusing on the daily struggles of a woman who looks a lot like her.

As a matter of fact, it for the most part is her. So it’s no surprise people get to know her through her strip.

Amanda the Great has long been El-Dweek’s fictional counterpart. Coming up with the name was fairly easy.

“I used to sign my papers that way in college, and I got scolded for it. And rightfully so,” she said. “I did it just to be funny and not out of arrogance or anything.”

Her real love was cartooning, which she said she’d been doing all her life. The school didn’t have a concentration in cartoons, but that didn’t bother her.

“I didn’t really mind that they didn’t have anything to offer, inasmuch as comics. I did learn a lot there. It kind of rounded out my art education,” she said.

She did have what she called a “straight job” to pay the bills. After college, she worked at the hospital for 11 years. Then, when she got married, she and her husband moved to Williston, where she worked in a law office.

About two years ago, they moved to Watford City, where her husband is seated as a district court judge. That’s when El-Dweek got seriously into her cartooning and began submitting portfolios of her work to the syndicates.

Most didn’t respond, or responded with only a two-sentence rejection letter. But one woman wrote a very helpful email that described what she liked, along with a few suggestions on things El-Dweek could improve upon.

El-Dweek took those suggestions to heart. She reworked her strip and resubmitted her package. That led to a contract in mid-2016, and the strip launched in November.

The contract is through GoComics, the largest syndicate online. Some of its strips do appear in newspapers — “Calvin and Hobbes,” “For Better or For Worse” and “Luann.”

To read her strips, go to GoComics.com, then search A-Z.

The strip focuses on her life, but it’s about four years behind what’s going on where she is now. So in the strip, she has moved from Grand Forks to Moorhead, Minnesota, then again to Williston with her husband. The two are just beginning to settle in.

The strip deals with things that come up, but she has to be careful.

“I won’t put everything in. I have to be mindful of my husband and his privacy. But my own stuff, I don’t mind putting out there,” she said.

At one point, after her husband’s uncle passed away, El-Dweek focused on that.

“It was a little bittersweet, but it’s still kind of humorous, some humor in it. I don’t want it to be like a dirge when people read my comic,” she said. “It’s usually pretty lighthearted.”

Since the strip is four years behind her real life, El-Dweek knows that her fictional Amanda will face some sorrows and joys in the strips yet to come.

“I handle it with humor, because that’s how I want the voice of my strip to be, I guess,” she said.

There’s something else El-Dweek has in mind for the future. She noted that one GoComics strip, “Breaking Cat News,” had its start online and has since made the jump to newspapers.

She wouldn’t mind that herself.

“I would love that. That’s what I have always wanted. But I realized, as I got older, it’s not something that’s the end-all, now. But at the same time, I would really like that. To me, that’s a really high honor, to be in a newspaper,” she said.